The wheel arches on the rear fenders on my 92 Civic are badly rusted out, which seems to be a common problem. I've seen replacements you can weld in at very reasonable prices, but I have no welding qualifications and expect it would be very costly to have a professional install them. Is it possible to use rust converter followed by body filler compound to get a durable and good-looking repair? I'm a real beginner at body work so apologies if this question seems stupid.

Here is a picture of the rust damage: 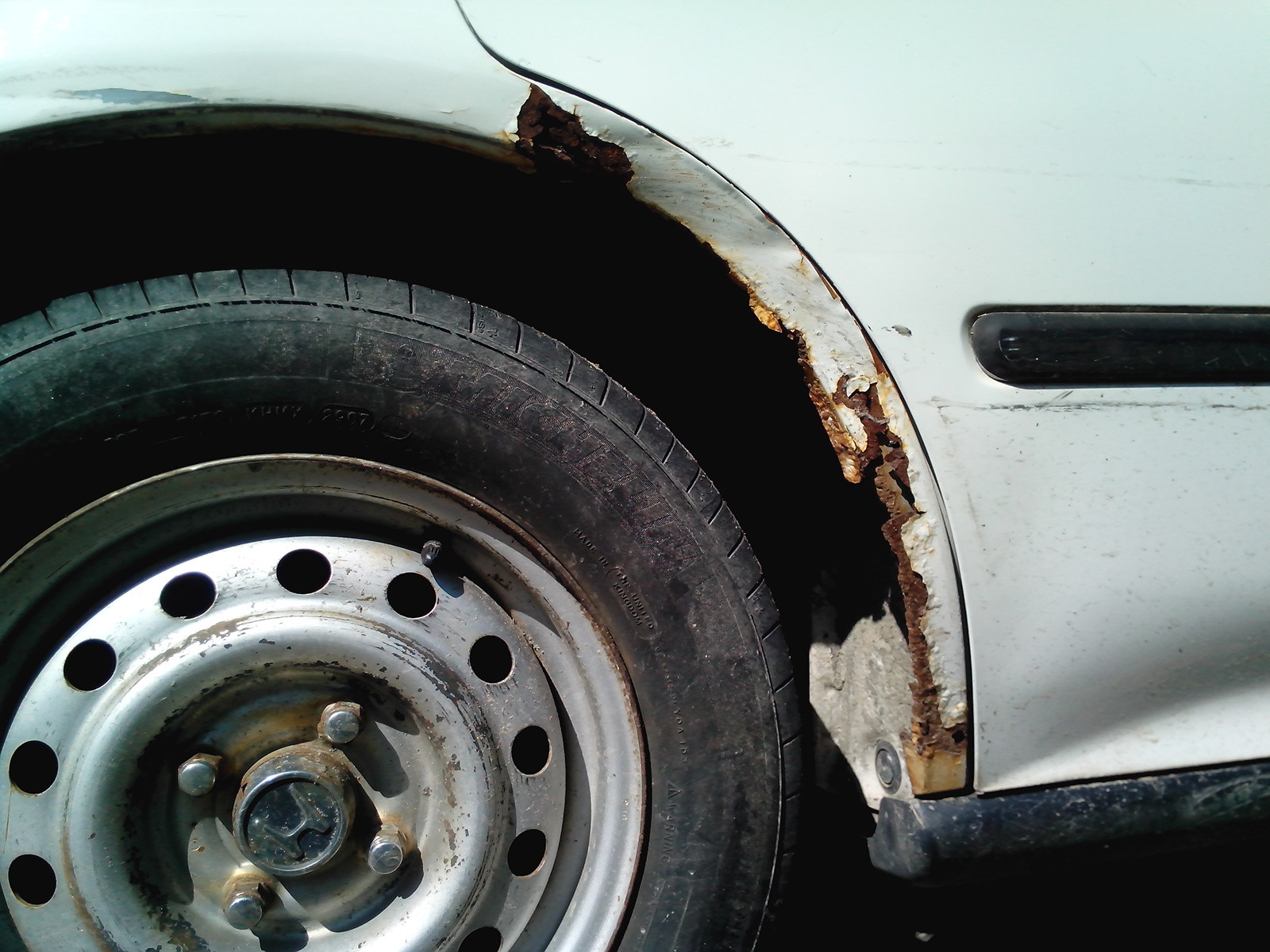 One thing I noticed in that thread was the claim that filler will wick moisture and promote rusting again. Is this true, and are there any good ways to avoid it?

I decided to go ahead trying to repair it, and I'm happy with the results. After bending the rusted metal back into shape, I started out using 40-grit sandpaper and a Dremel with a rust removal brush to remove paint and the brittle rust. Then I applied rust converter to what remained to prevent it from spreading.

For reconstructing the rusted-out part of the wheel arch, I asked the guy at Napa for advice choosing a filler material, and ended up going with a fiberglass resin. He thought plain Bondo would be more brittle and might break if rocks or road debris got kicked up.

To begin with, I cut (well actually tore) a segment of aluminum window screen and shaped it to match the missing part of the wheel arch: 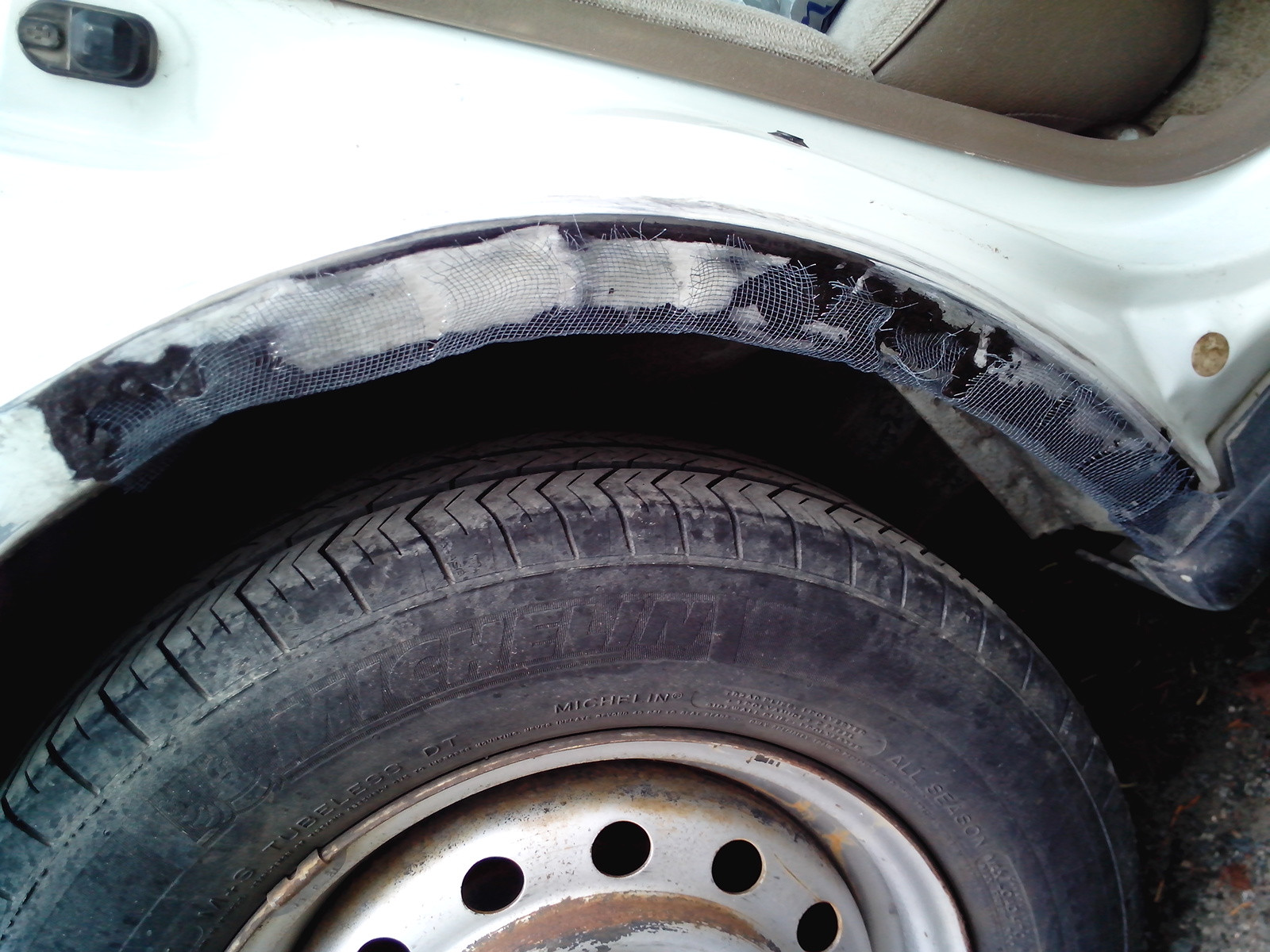 I then globbed the fiberglass resin onto sheets of non-stick aluminum foil and stuck them to the screen for the main panel part (not the lip) and let them dry, then removed the foil and applied the resin for the lip directly to the screen with a putty knife. At first, it surface was every irregular: 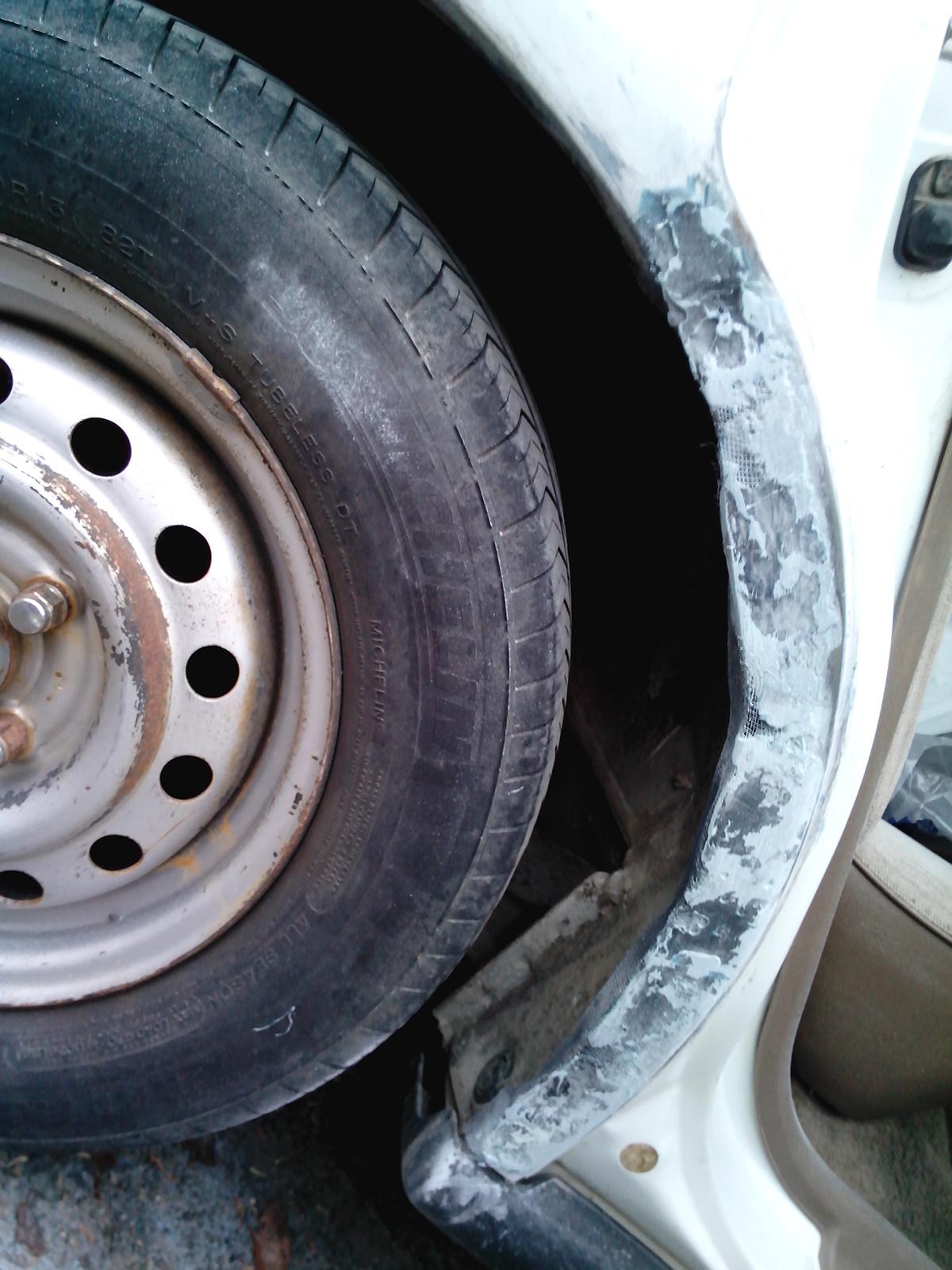 but I repeatedly sanded it down and added more resin as needed until the pits were pretty-well filled and the shape was right. I ended up applying the rust converter again after the final sanding, since I'd exposed bare metal and got a heavy rain before I could finish the work.

When I went to put on the primer (Napa's store brand), I found some remaining pits that were going to look ugly. I tried several unsuccessful ideas for filling them before settling on just spraying the primer on really heavy then sanding it down, which worked our reasonably well: 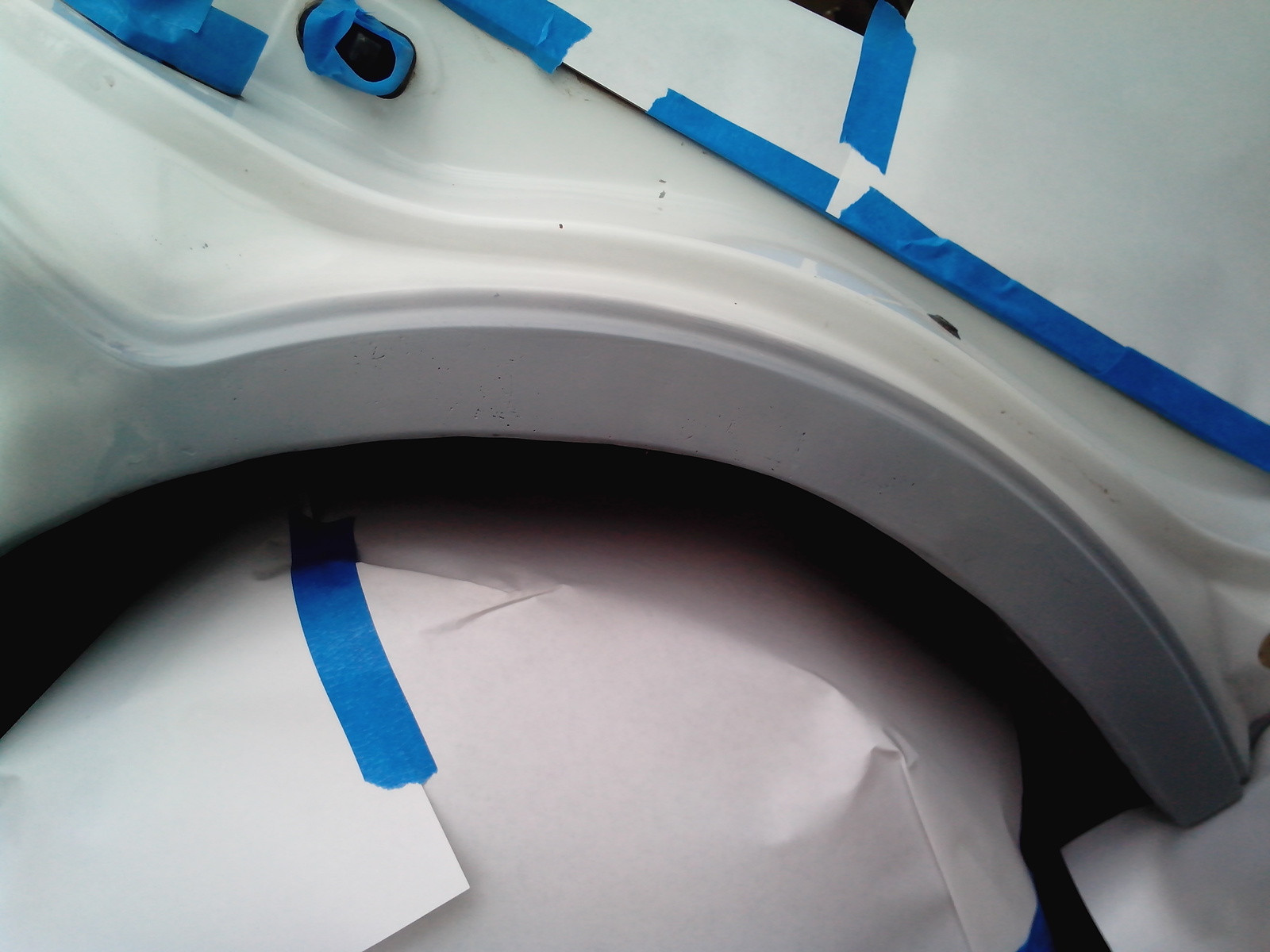 For paint and clearcoat, I used Duplicolor, which matched the original factory color almost perfectly, even with 20 years of wear on it. Here's the final result: 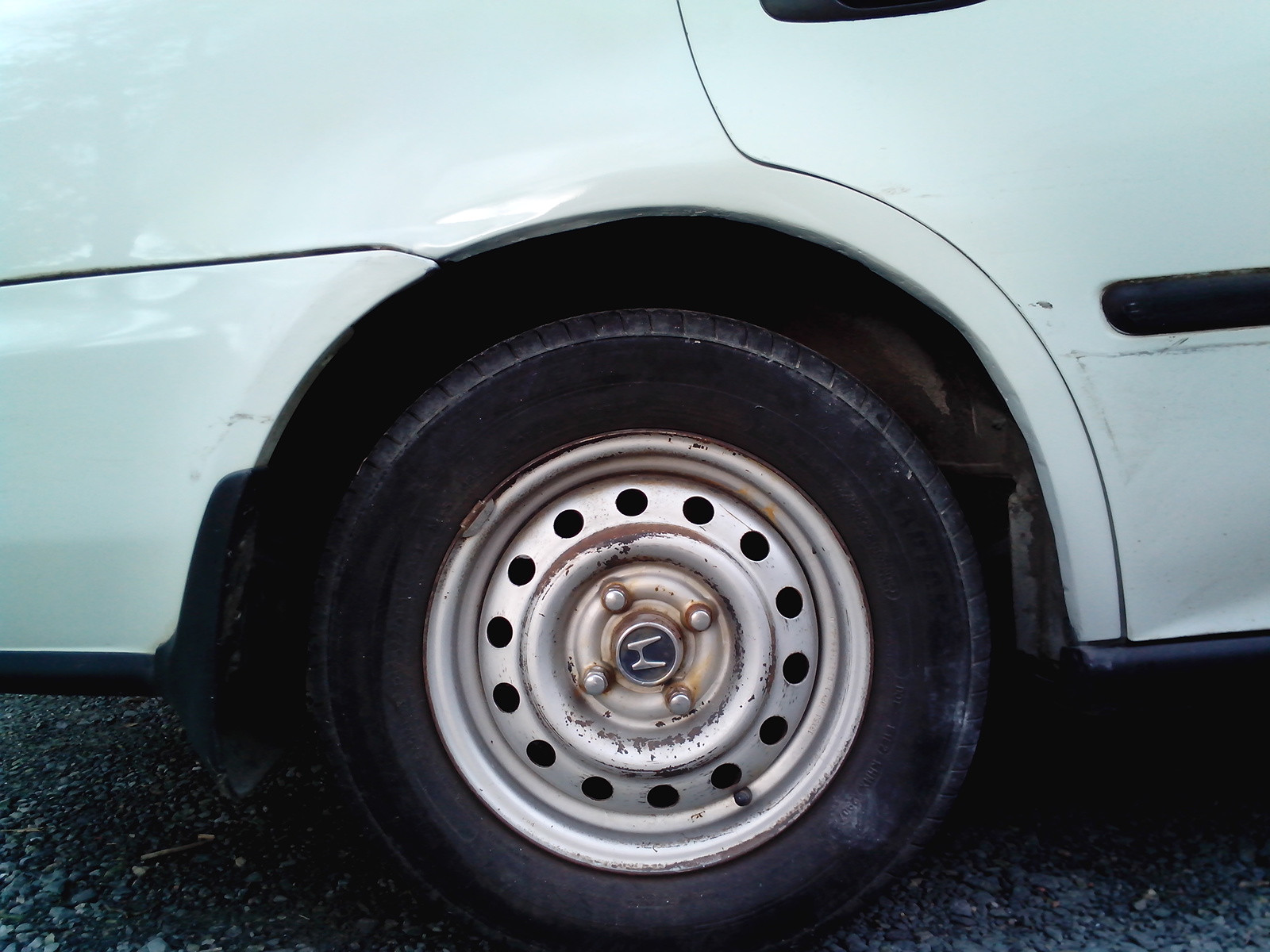 I'm going to wait for the paint to fully harden before I reattach the rubber piece that goes on the lip. That should make it look even better, and protect it. Now I just need to re-paint the adjacent scratched-up panels.

Overall I was really happy with the resin product I used. It's very strong (hard to sand, actually) but not extremely rigid, so hopefully I don't have to worry about it breaking if somebody bumps my car in a parking lot, etc.

The pictures show some extensive rust. Body filler is used to cover low spots and smooth seams it is not intended to replace metal. The proper method is as you say to cut out the rust and weld in the new parts. However if you are just trying to get through another inspection period, finish school etc a short term repair may work for just that, a short term. The first thing to determine if is the rust has progressed to the point the structure of the car is unsafe. Unibody chassis are built like a cardboard box, pretty strong unless you start cutting big holes in it. Have a mechanic raise the car on a lift and check the underside of the car. Pay particular attention to the suspension mounting points and critical body stiffening panels. If you get the repair panels you may attempt to install them with rivets or sheet metal screws it may look decent for a short time, but will eventually fail. As far as what it will look like it will most likely be a 50/50 repair. It may look ok going by at 50 mph or from 50 feet away.

Welding is something that intimidates the novice.Mig welders (metal inert gas)welders can be hired;both gas and gasless.In a wind free environment gasless are O.K. Gas provides a shield against contaminents.Takes more practise than an arc welder so practise on scrap. A weld is always stronger than any body filler

Not the answer you're looking for? Browse other questions tagged honda civic body rust or ask your own question.

5
Removing badly rusted and broken bolt from suspension
2
Rusted Rear Rotor 2004 Chevy S-10
1
2001 Honda Civic timing belt assembly repair question
5
Do I need to replace just my one rusted rear rotor, or do I need to replace both rear rotors?
9
Rusted gas tanks, how do you repair them?
2
Repair question on wheel vibration
2
Affordable-ish but not-too-cheap-looking rust repair for wheel arches?
1
Can a car body get rusted?
2
Roof is rusted and pitted - Use Flex Seal?