However, the code did returned back this past summer at some point. It was originally triggered I think by a misfiring coil pack on #2. I had replaced it with a Denso (twice as the first one failed after a month). The misfire issue ceased. But I do highly suspect that it fouled the front CAT some (and the P0430 made sense). But just before testing this year, I discovered I also had a P2241. So I replaced the front/left A/F first. That nixed the P2241, but the P0430 has remained. So, since it got me through emissions last year, I again ran Cataclean through, but no joy. After a couple of tanks in between, I repeated the Cataclean. Again no joy. :(

So I started looking at the CAT being clogged/failed. But, no tell-tale signs of it save for reduced mileage. Good power and acceleration at high speed still. Idles very smoothly. Also, good puffing exhaust at the rear (though I know this isn't definitive since the two banks merge post-CATs). So, I decided to replace the Bank 2 downstream O2 (again a Denso).

While I had the old one out, I decided to stick my handy new Teslong borescope into the downstream port. I've attached some pics of the tail end of the Bank 2 CAT. Definitely shows some deposit at the lower end of the substrate. But it is white, so I suspect phosphorous and/or ash. 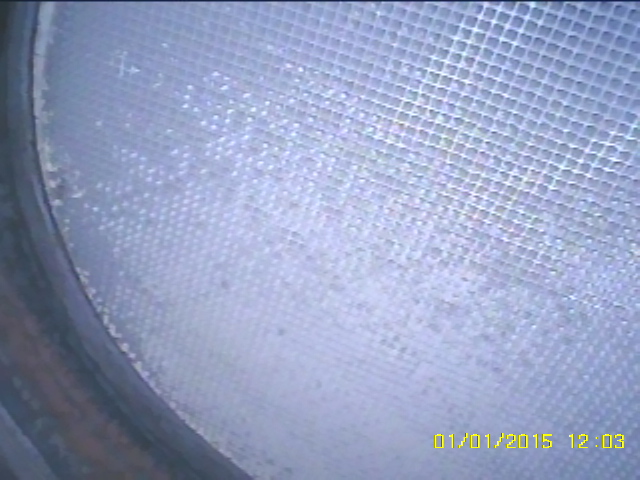 This looks like ash build up to me, but I'm NOT a trained mechanic with emissions expertise. Hopefully some of you are! :) 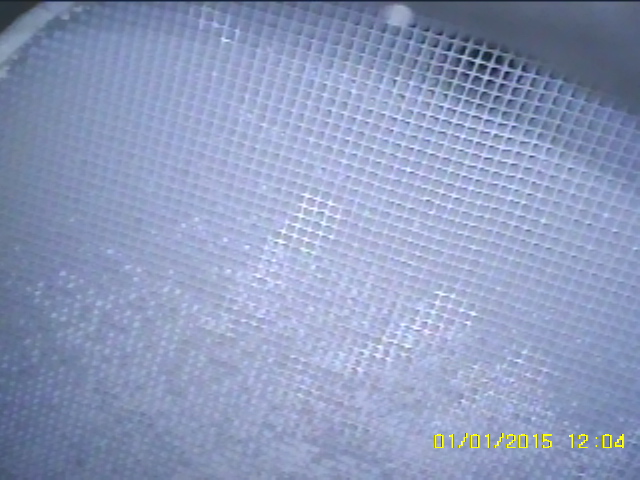 It appears that at least part of the substrate's channels are not collapsed. I could've open the upstream sensor port of put a bright light in to make a better determination.

I also decided to look the other direction, and there was white debris trailing down the bottom of the pipe. I know substrate could be crumbling out. But it was a very windy day, and as I was scoping it, wind was whipping all around me and into the pipe. The debris blew around like styrofoam beads. Ie, it was very light material. It almost looked like the white debris on the ends of the lower substrate getting blown out of the CAT. Which makes me wonder if the Catacleans did have some positive effect in dislodging some of the build up. 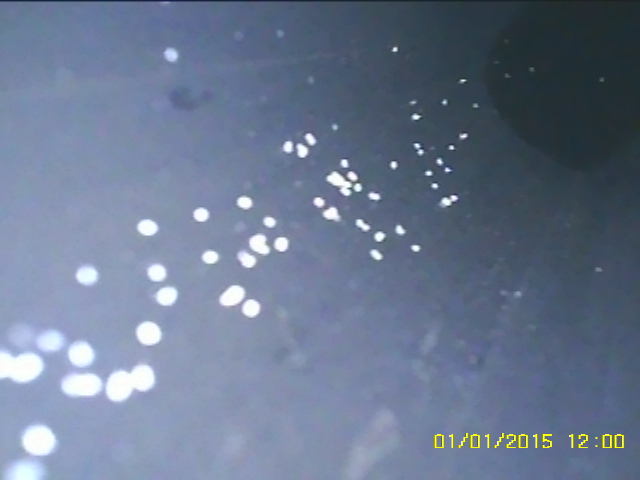 This must be the same white material from the bottom side of the substrate. It is light weight too. The wind blew this stuff around like Styrofoam beads. This also make the think it is an ash of some sort. I would think that crumbing substrate would be more weighted down with metal oxides.

So, after installing the new downstream Bank 2 O2, I went for an hour's drive out on the Interstate at 80mph. The P0430 didn't clear, however, now I'm also showing a pending P0420!! I can see the Bank 2 CAT being fouled by the misfire (and/or the cause of the P2241 issue in Bank 2), but now both banks under efficiency??

While on my Interstate drive, I did have OBD Auto Doctor running on my Macbook Pro. Below are a couple of screenshots from that capture. I think the downstream sensors are reading correctly, but now that I'm suddenly seeing codes on both banks, I'm suspicious that something else further upstream is causing these. 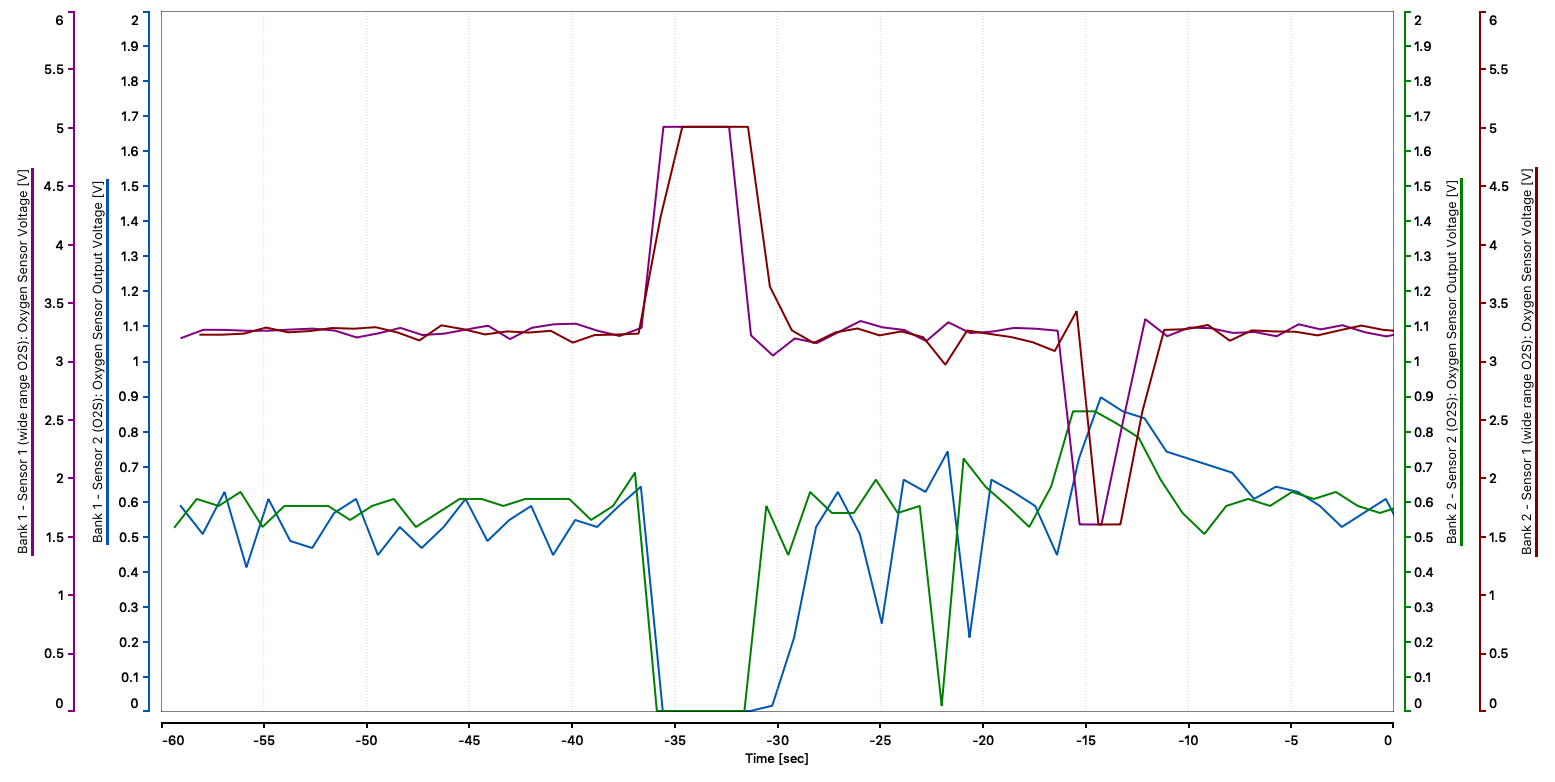 Using OBD Auto Doctor (paid version), I captured some plots of the upstream and downstream sensors while on the Interstate drive. Here I had slowed down for a cop helping a stalled motorist. Then I promptly resumed my cruise speed. 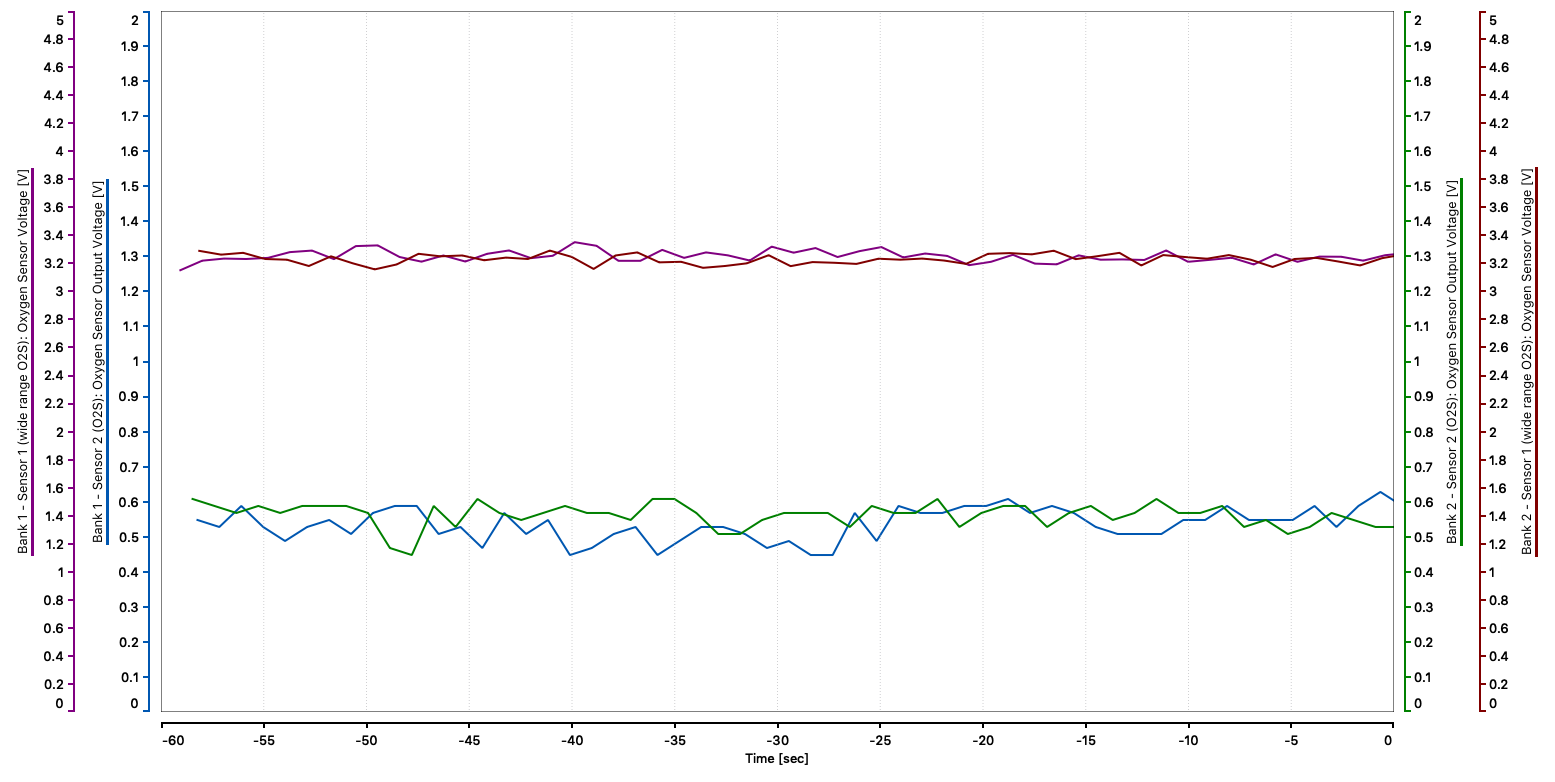 Yet another plot while holding 80mph under cruise. The downstreams are calmer, but still look more jagged that I would think they should be.

I've still got to check items like EGR, PCV, cracks in intake or exhaust, the gas cap (it's original), and the thermal gun test pre- and post-CATs. The car is old, and very high miles, and we've gotten our money's worth out of it. But it drives and runs nice still. I hate to think of replacing both CATs on a vehicle this old though.

What REALLY bites is that the state of Tennessee voted to end mandatory emissions testing around Nashville that took effect back on July 1st of 2018. Yet, due to EPA bureaucratic red tape, yadda yadda yadda, the annual emissions testing requirement won't actually end for another 2.5 years!! I don't think I can successfully dodge tag renewal that long! :)

I've read that taking the CATs off and soaking them in a solution of citric acid or Dawn detergent can have a positive effect on efficiency, maybe enough to get passed for emissions. But that is still a lot of work to get at the rear bank and what not.

From what all I've described, along with the scope photos, what would some of you suggest before making the really painful, yet ever looming closer conclusion that in fact one or both CATs are beyond salvation? 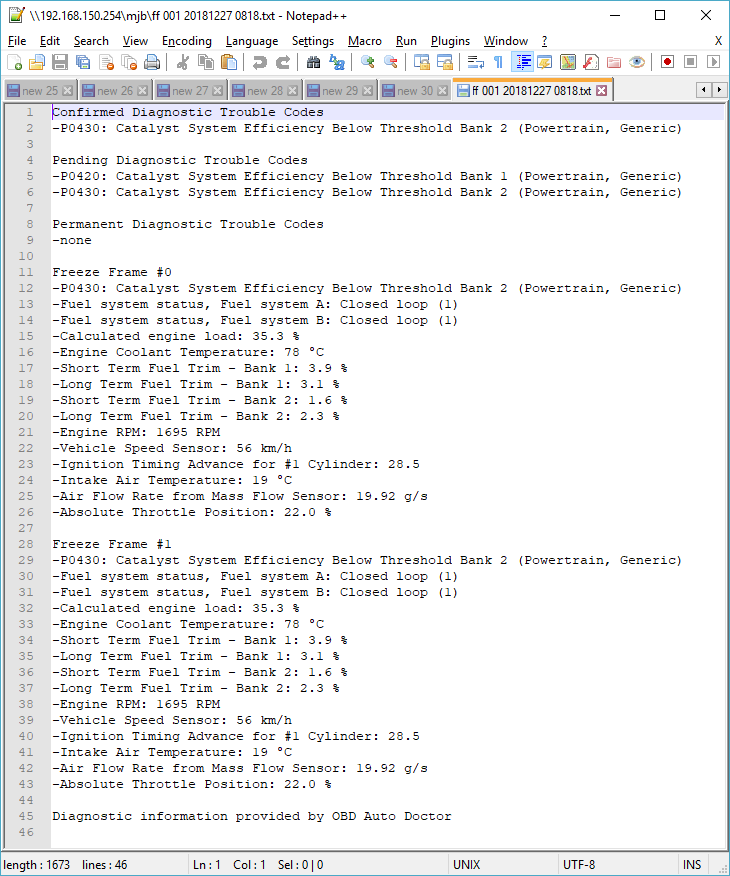 Please excuse the number of them as I added more than just idle and 80mph as it appears to my untrained eye that there's a weird disparity going on between LTFT B1 vs B2 in many cases. What would cause this?? I would think fuel supply to both banks would be on par with each other.

Why would one bank be appearing to get more fuel than the other??? Timing? Fuel injection issue? Fuel economy is down, so something is telling ECM to feed more fuel than normal, and it appears to not be spreading it equally between each bank. I suppose a more heavily degraded catalyst on one bank could cause this. But is there anything else upstream that might also cause this? I've read that a new CAT will end up suffering same fate if an upstream issue is really to blame. 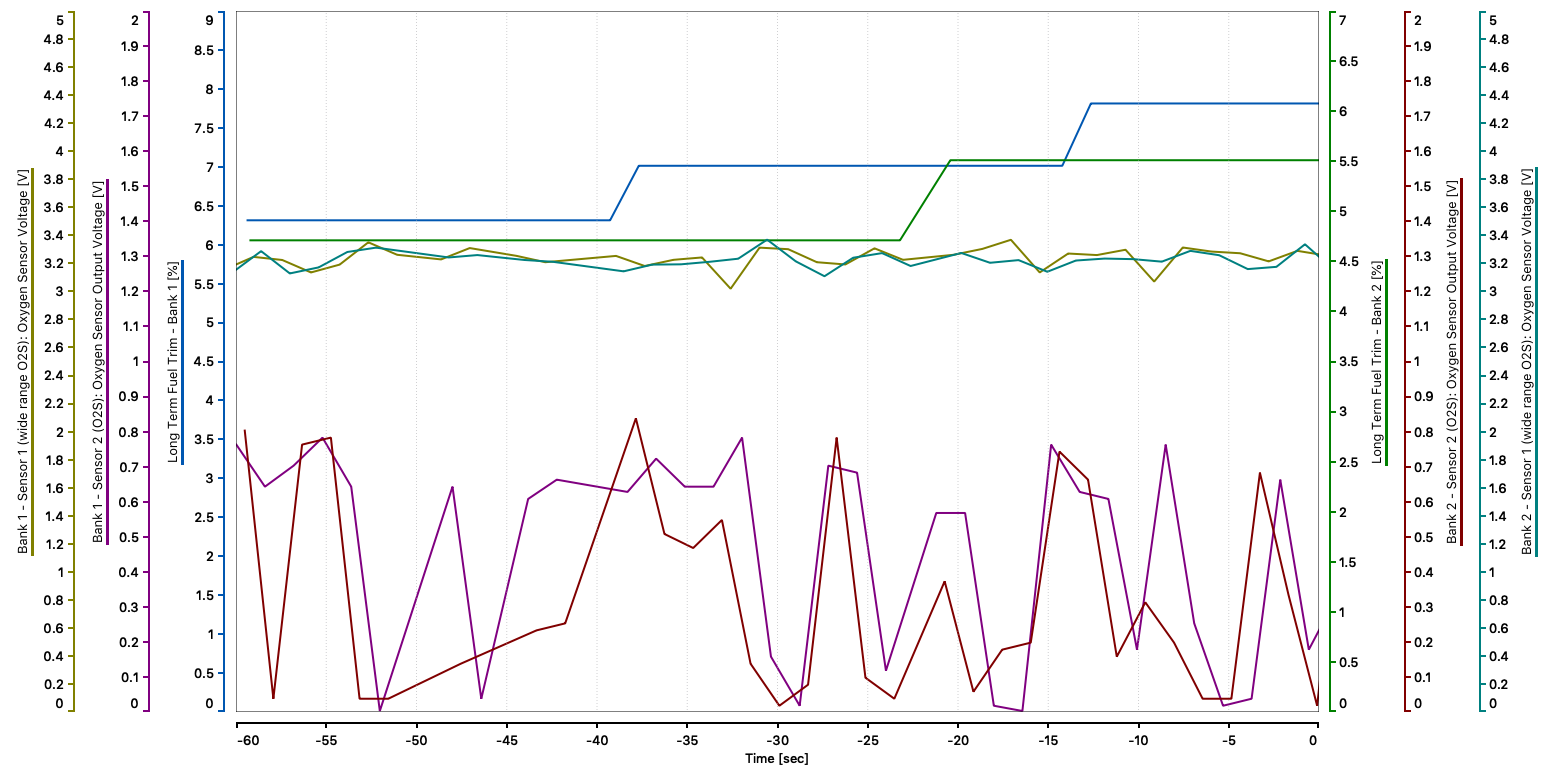 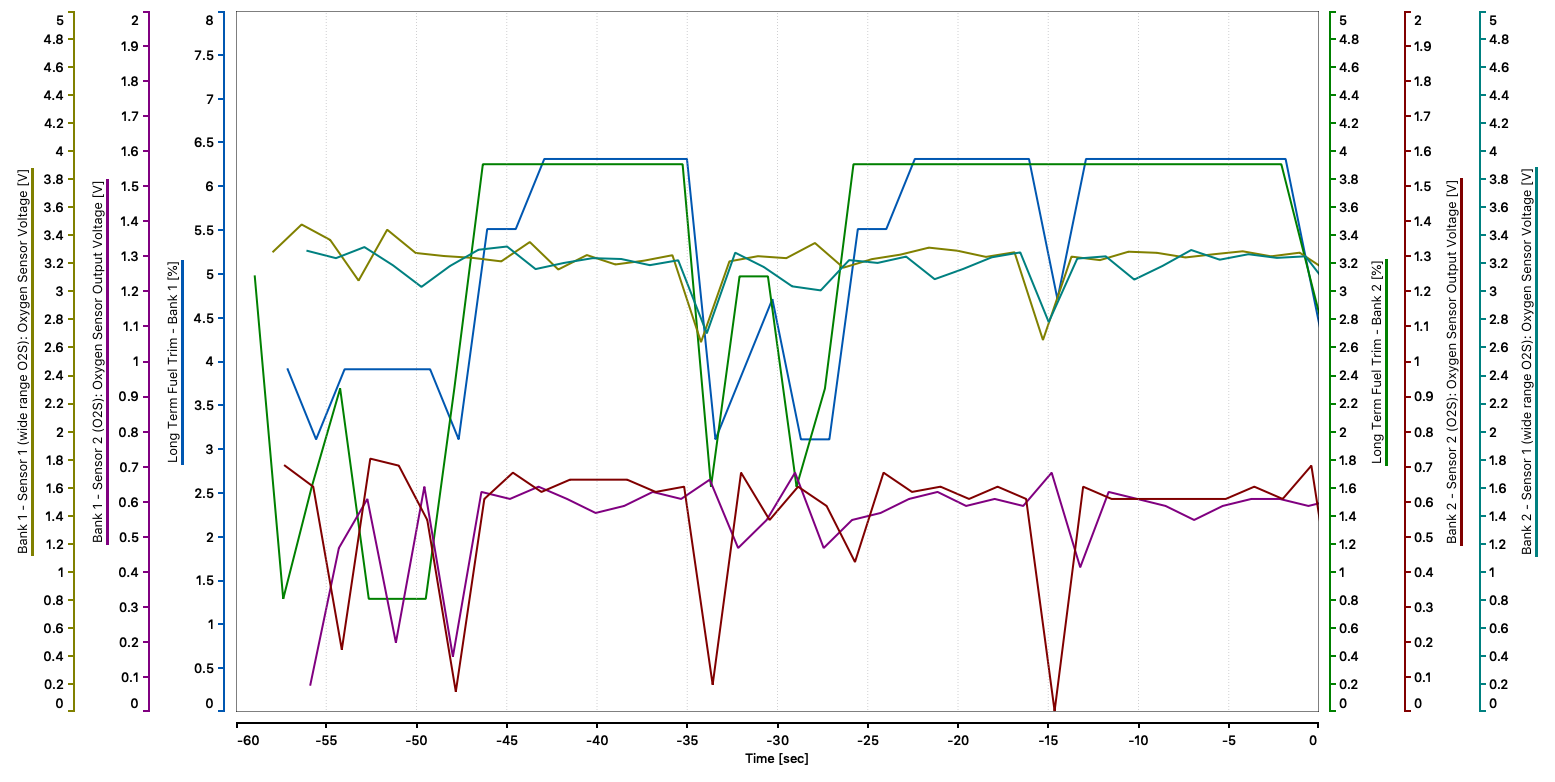 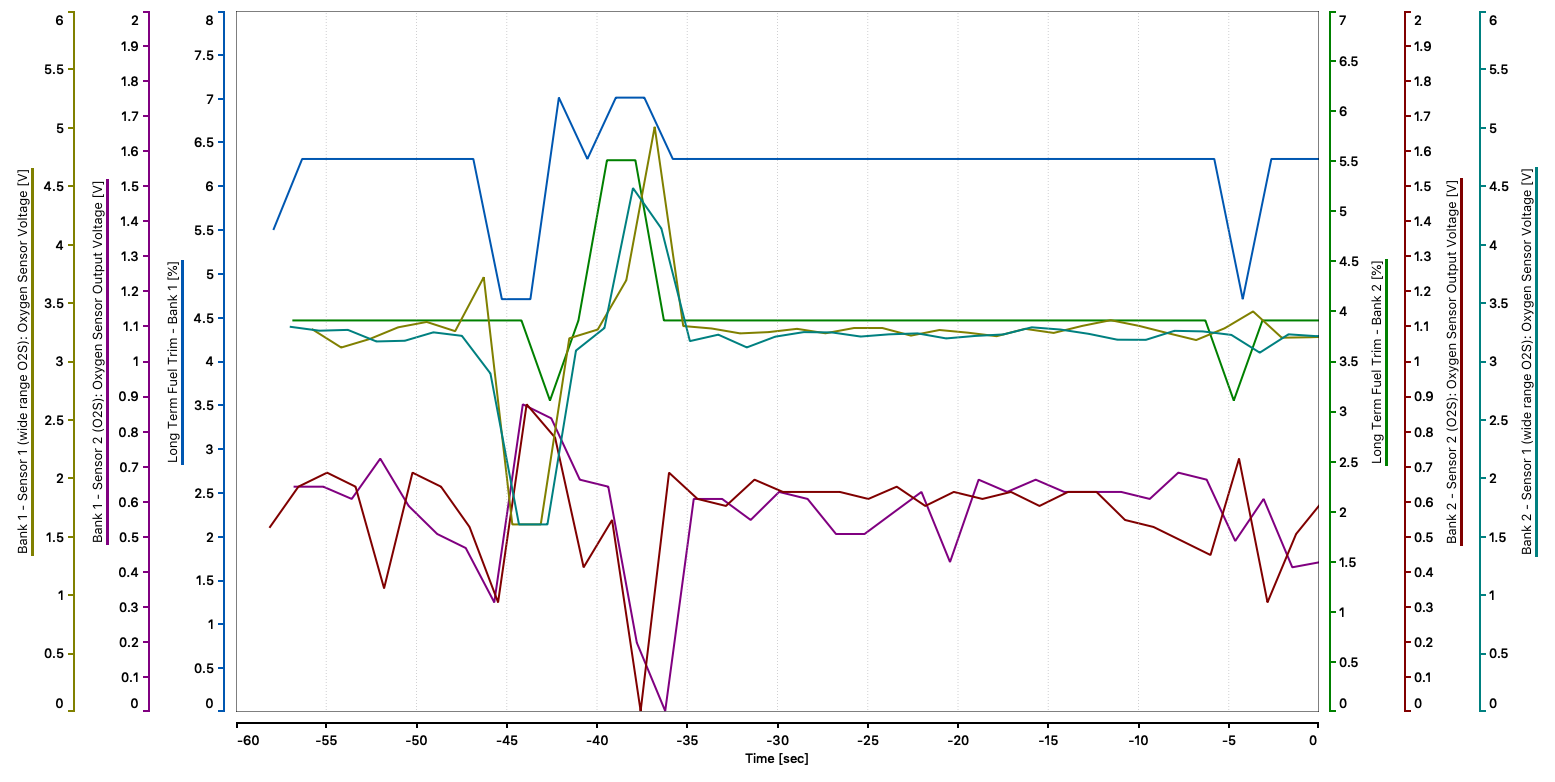 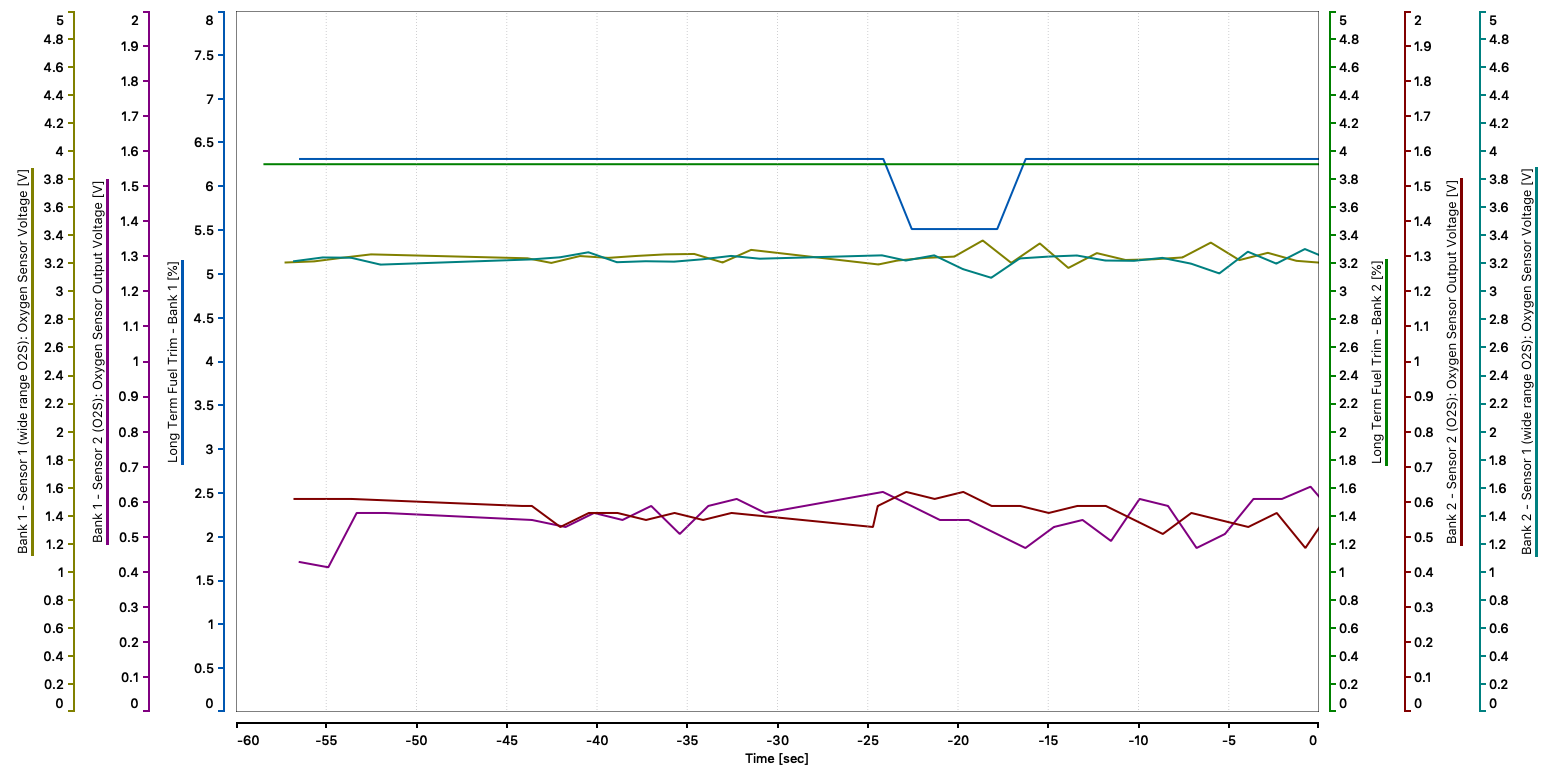 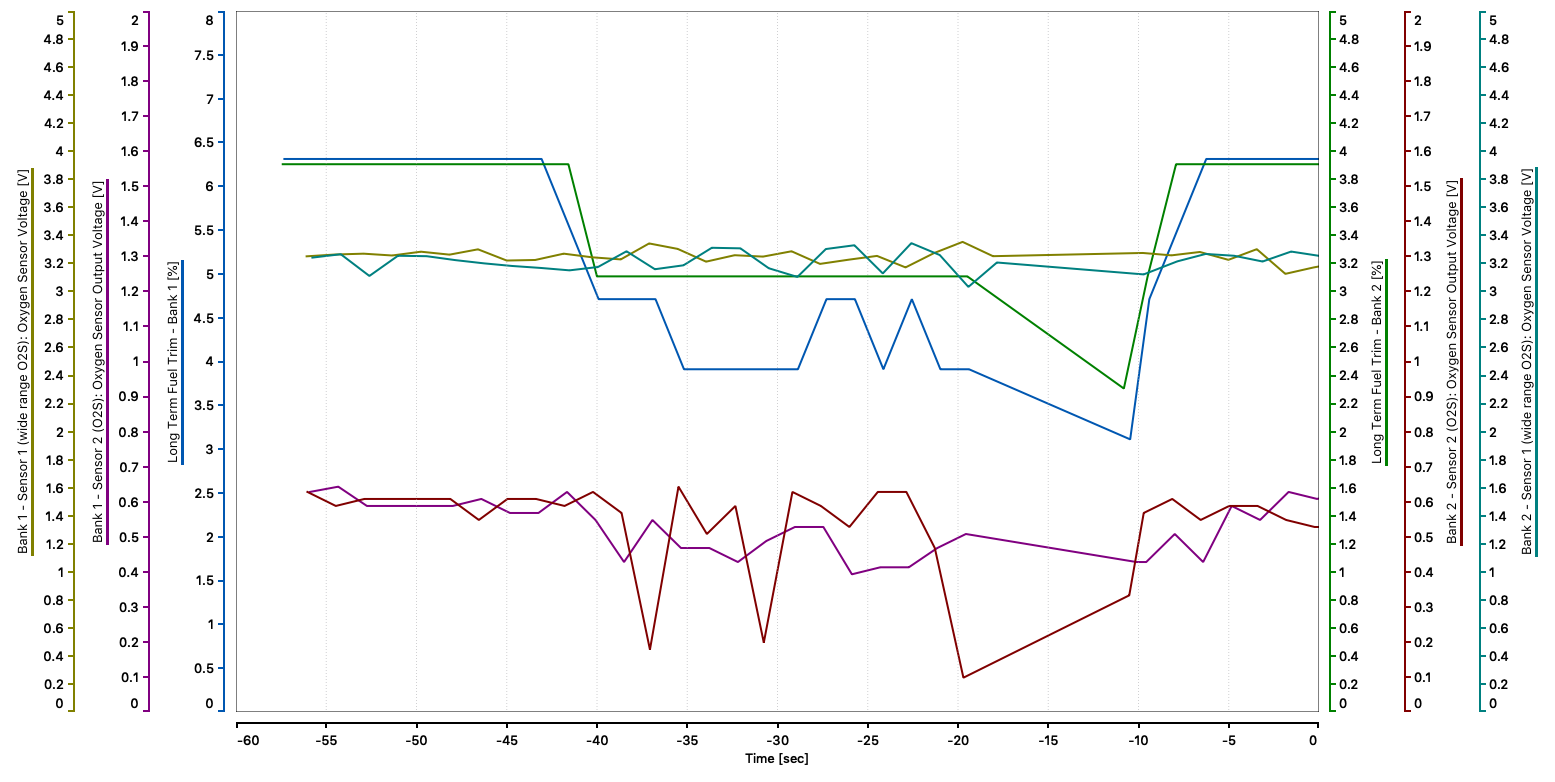 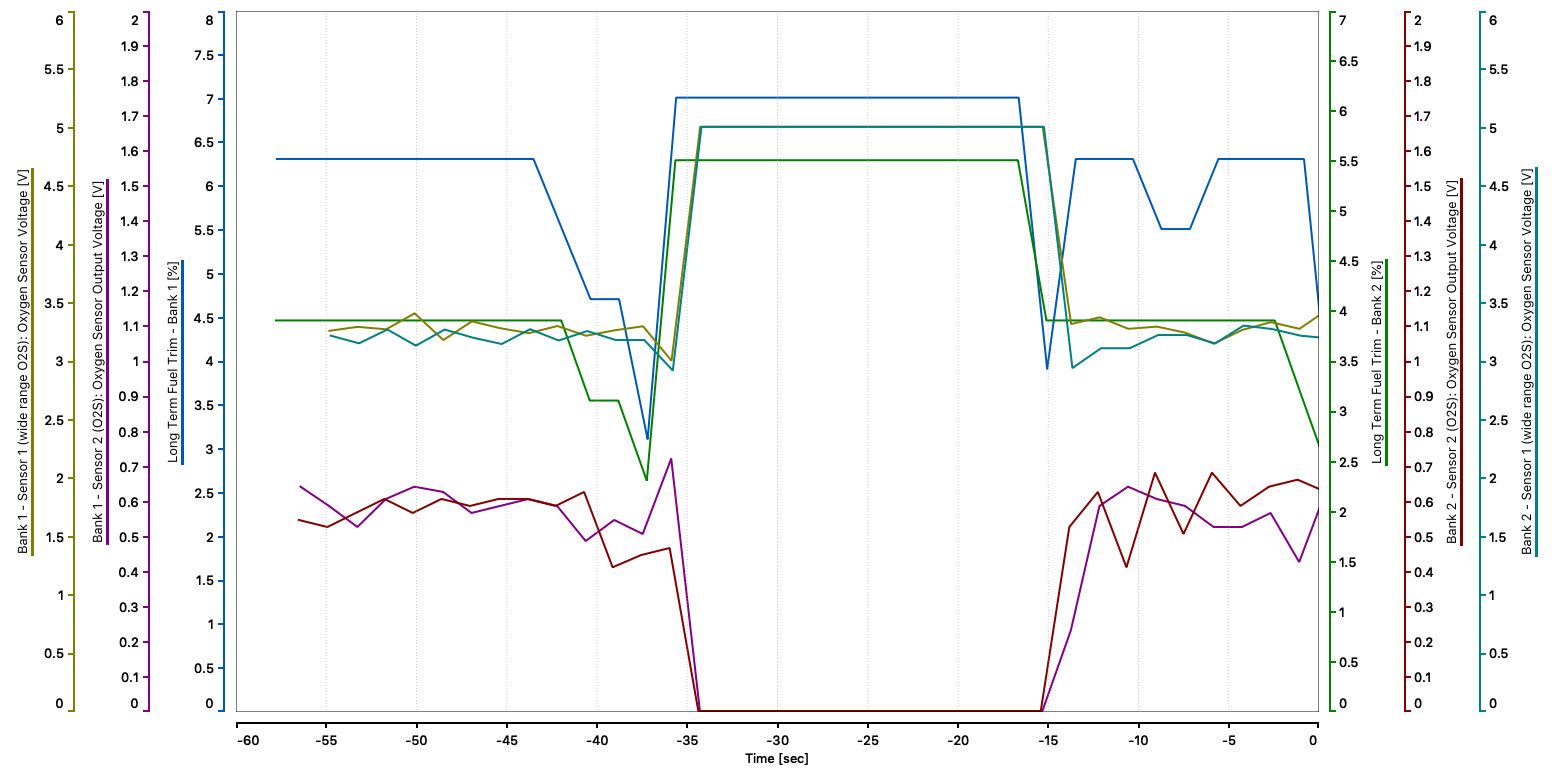 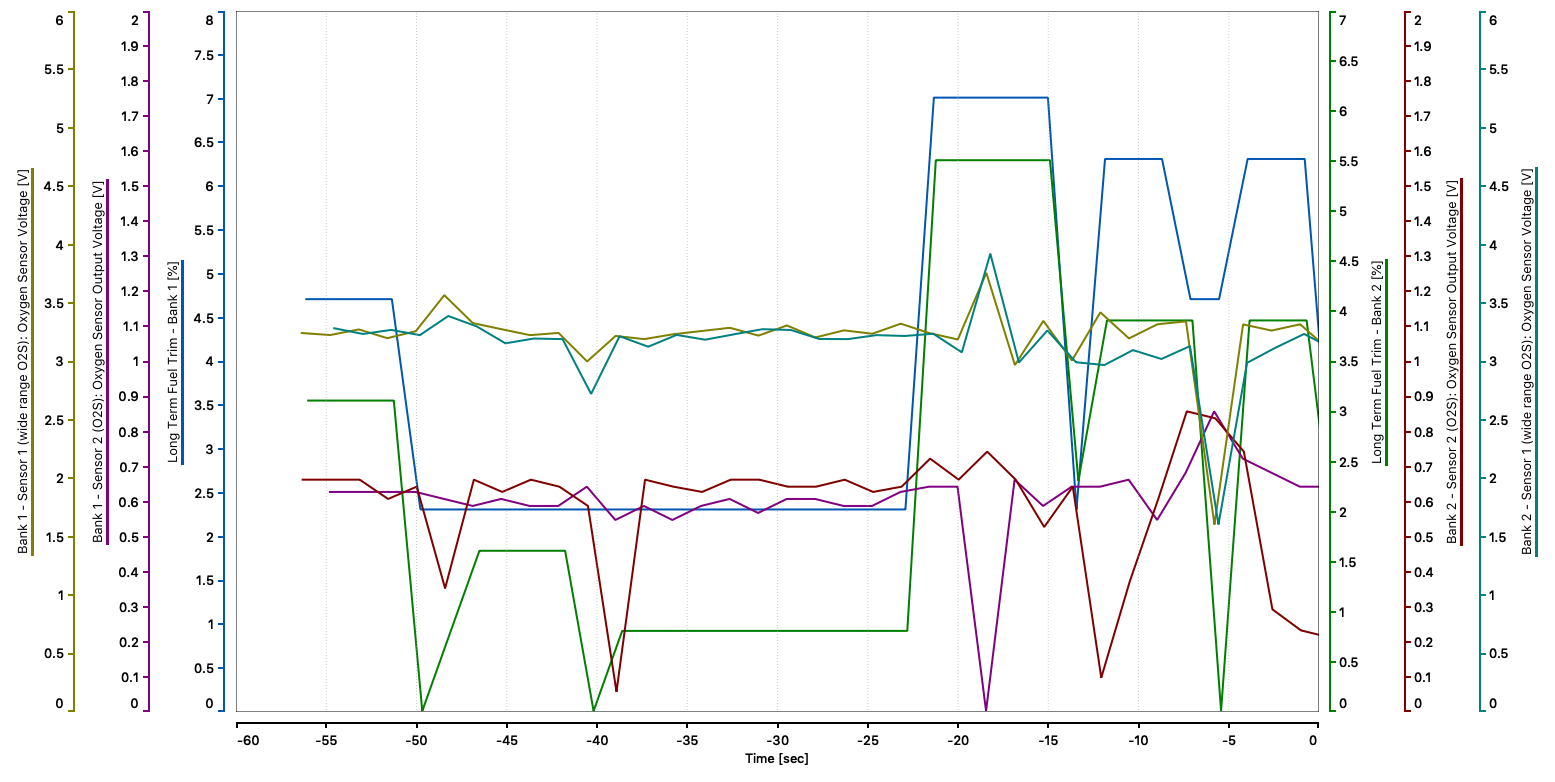 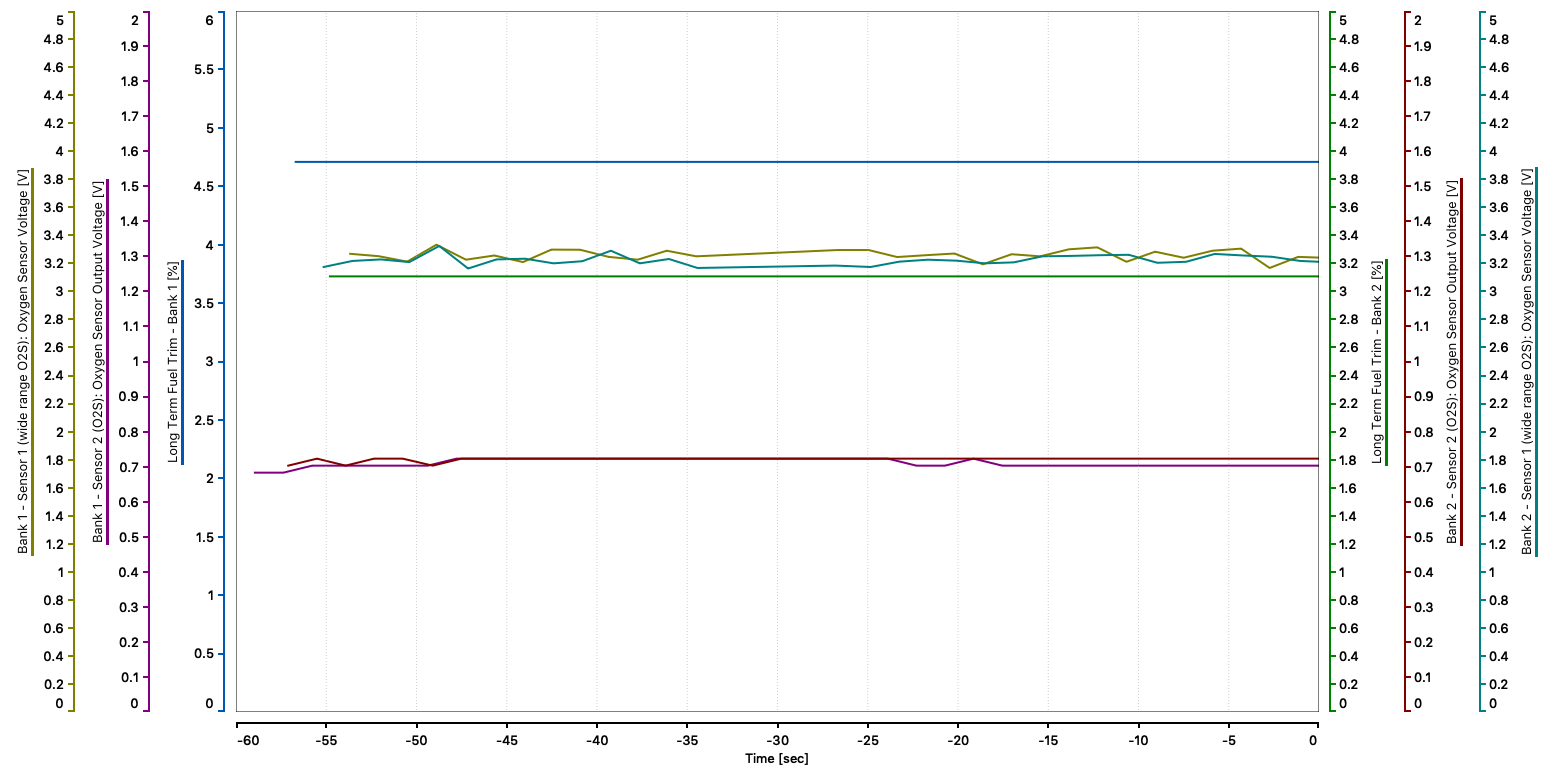 Back home, driveway, idling - Note persisting diff in LTFT B1 vs B2 while A/Fs and O2s now calm!