What happens when one hugely exceeds towing capacity of an electric vehicle?

I've came across stunts with Tesla X towing huge weight: over 100 tons of muck and even a Boeing Dreamliner jet. I haven't found any clue as to one or the other video being rigged, so I assume the vehicle is capable of pulling an order of magnitude heavier loads than it's rated for (about 2,5 tons). In both cases the car towed the weight outside traffic, very slowly and over a very short distance. 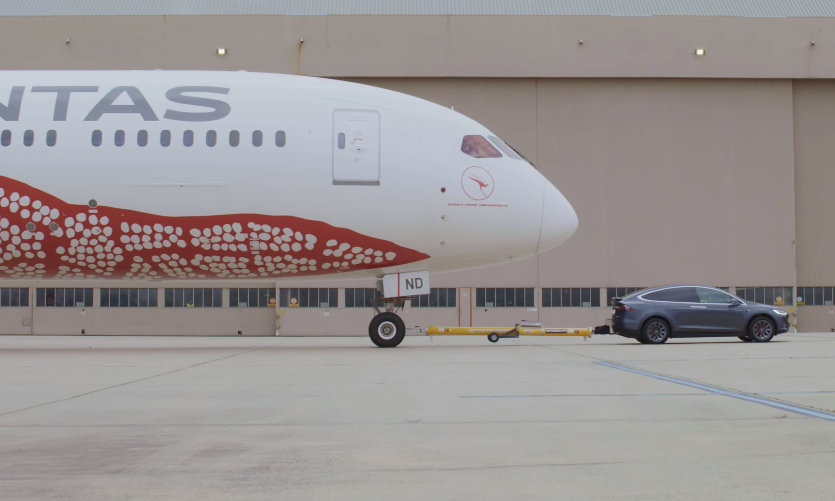 I haven't looked much into traditional internal combustion cars pulling off such a stunt, but I imagine that both dry clutch and a torque converter will be seriously overloaded in such scenario. A burned clutch disk, as it appears to me, will be the worst damage one could do (stalling the engine for a few times before giving up being more likely).

But what permanent damage could I cause if I took a new production Tesla X or other high-spec EV without any modification and tried something like this myself? Would I risk overheating the motors, reducing battery capacity, warping the body of the car?

Added to clarify: Given the torque available, it seems much easier to tow or pull heavy loads with a standard, unmodified EV than with a conventional car. Failure modes caused by overloading the drivetrain are to a great extent popular knowledge, which is not the case with EVs. How does traction overload affect an EV? I'm interested in both short and long term effects of both one off and repeated overload.

Example answer for a manual transmission petrol engine car would be burned clutch, perhaps worn out transmission or differential gearing.

As HandyHowie says, the rated towing specs of a car are not about the amount it can pull, but the amount it can control - in in particular, the amount of braking available. The heavier the trailing load is relative to the tow vehicle, the less stable the combination is - you'll find plenty of videos on youtube of what happens next. Vehicles designed for heavy loads don't have this problem as the fifth wheel and braking systems are designed to keep the trailer more stable.

There's plenty of videos out there of cars towing airliners - it's quite a common publicity stunt - there's quite a few car-towing-train ones too. In both cases (as 'a CVn' notes), the load may be heavy, but has a low rolling resistance, and is in a constrained environment, reducing the risk of a loss of control.

As to what would happen if you massively overloaded the motor, this will depend on one key factor - whether the motor generates more torque than the tyres (and surface) can deliver. If it does, the wheels will spin, creating more heat, and will slowly gain more grip and eventually get the load moving. The tyres will be trashed, but the rest of the car will be fine.

On the other hand, if it can't, it will stall - the current is still flowing through the coils, but the magnetic field generated isn't enough to turn the motor against the resistance of the load. The current will increase, and the motor will heat up. Most likely the car's electronics will incorporate over-current protection, and will cut out the power - if it didn't, the motor would soon overheat and melt the insulation on the coils, destroying the motor.

This is rarely the case though, due to a key useful property of electric motors - full torque is available from zero RPM. This allows very large loads to be started by the simple expedient of starting it very slowly, and gradually increasing the current and speed as the load starts moving. This is what allows electric (or Diesel-electric) railway locomotives to haul very heavy trains, and is in contrast to a traditional IC transmission, where the motor has a lower limit to the speed it can go, and so a clutch or torque converter is needed to 'slip' the torque to get the load moving.

Not the answer you're looking for? Browse other questions tagged damage towing electric-vehicle weight or ask your own question.

0
Safe Vehicle Operating Temperature while towing
4
Equivalent of “gas can” for electric vehicle?
0
Conflicting statements RE Towing Capacity in Owner's Manual - How much can I tow?
4
What does the rated capacity of a commercial tow rope/strap mean?
1
Towing a running vehicle?
2
What happens when an electric vehicle's battery die?
1
How to approximate the maximum towing capacity of a School Bus
1
Question on Electric Vehicle speed control
0
PHEV Vehicule - What happens if you hit 0% battery?