I live in a large apartment block and the parking is 3 floors down, with a speed bump on each floor parking level. The speed bumps are very aggressive and seem squared off like in the picture below but a little bit more aggressive. 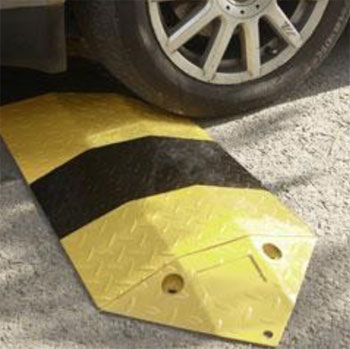 Driving over them at a very slow speed seems to make the car shift a lot more than driving over at a moderate speed. And in between the low and moderate speed is obviously the worst position as it shifts a lot whilst being sudden.

When I drive over with a moderate speed, the car reacts to the speed bump the way I expect it to, without shifting as much and the suspension seems to handle it. It makes a bit of sound though. There is no rated or suggested speed written.

How would I best approach these speed bumps to limit the daily wear and tear to the car by driving over them several times each trip?

Slow as you can stand if you want your shock absorbers to last a bit longer. Shocks are typically oil filled canisters that use the oil to quell the desire of the spring to keep bouncing, by forcing the oil through small holes. Doing so degrades the oil over time making it less viscous. The harder and more often you slam the oil, the quicker it degrades. Most shocks fail because a seal failure causes an oil leak but they can get worm out and have little damping action if the oil gets too thin

If the bumps don’t extend all the way across, take them so they alternately bang only the left or right wheels (drive so one set of wheels bypasses the bump, by going near the kerb). Additionally if you can arrange it so you're carrying out a right hand turn/sweep as the left wheels pass in the gutter and the right wheels pass over the speed bump, you'll experience less of a bang, because the center of gravity of the car is shifted to the left due to the right hand turn, and its thus easier for the speed bump to lift th right hand side of the car

I've mused over whether taking it at an angle is better or worse, so the front right wheel takes the bump first followed by the front left, back right, back left (or vice versa on the other diagonal) and I believe it to be detrimental, chiefly because it's far more uncomfortable so I reason that the forces applied to the occupants seem greater and in opposition and the car components experience similar. Thinking it out further, if the car were a wheel barrow, hitting with one front wheel is asking the car to be picked up by one corner (one handle), not only twisting the chassis but asking a localised point to carry the load. The anti roll bar and mount points experience more twist force as they try to compress the opposing suspension, then there's a twist the other way as the second wheel hits, carries the load and the first wheel is relatively "in the air". All in, I don't think his approach is as good as both wheels in tandem, no teistibg and sharing the weight of the car across both

If no smooth gutter is available I just proceed square on at a medium/high speed so there’s a bang but the cabin doesn’t rocket skyward much, but then I don’t drive an expensive car and do repairs myself. Also if a speed bump was so severe that it will bottom out the suspension (cause the wheel to move up so much that the suspension it hits the rubber bump-stop at the top of its travel) I’ll take those a bit slower. Regularly hitting bump stops can induce structural failure in the chassis or suspension

Not the answer you're looking for? Browse other questions tagged suspension driving tips-and-tricks or ask your own question.

5
How to improve suspension on my 2005 Volvo S60?
3
Rear suspension much more sensitive to bumps than front
2
Clicking noise when starting from low speed, going over bumps
5
Damage to shocks over speed bump
7
Thumping/Knocking noise coming from the rear (suspension?)
3
Noise over bumps
4
Clunking/grating sound coming from front right when turning left at speed
7
Car pulls to the side when driving or braking on a bumpy road
2
What is the purpose of this mount on the upper suspension arm?