For a relatively new 12V battery (5 months old), how long does it take before it drains and ends up not being helpful to start the car? I had just my internal lights on for 30 minutes and after that I am not able to start the car using the Push start feature of my car. When I try to start, the lights under the "Starter system" stays on in the dash and "Malfunction indicator lamp" blinks.

This is a Honda accord 2013 (9th gen), if that matters. The battery is Interstate brand (Installed from Honda dealership under the "Honda" brand)

Update(12/11/2018): So since the push start was not working, I called the towing truck. They came and tried for a jump start. Did not work. So we towed it to the dealership. The towing truck dropped the car at their lot and it started working. I am able to do push start. I started the car, drove for 10+ minutes locally and came back to the lot again. Stopped the car and was able to start again.

When I spoke to the dealership service person, he said it could be because the towing did some shaking which fixed something?. They ran a battery test and it came out as "Good"

A day ago before this issue happened, I disconnected the negative terminal of the battery and reconnected it back. But I drove the car at least 4 times after that. When the "push start won't work" issue started next day, the car was stationary (I was doing some work inside-removing the outer trim in center console). I was able to start the car once. (Switched from P to N and pulled the parking brake up, so that I can lift the trim properly. After this (just 5 minutes later). I was trying to start again and I noticed the starting trouble. 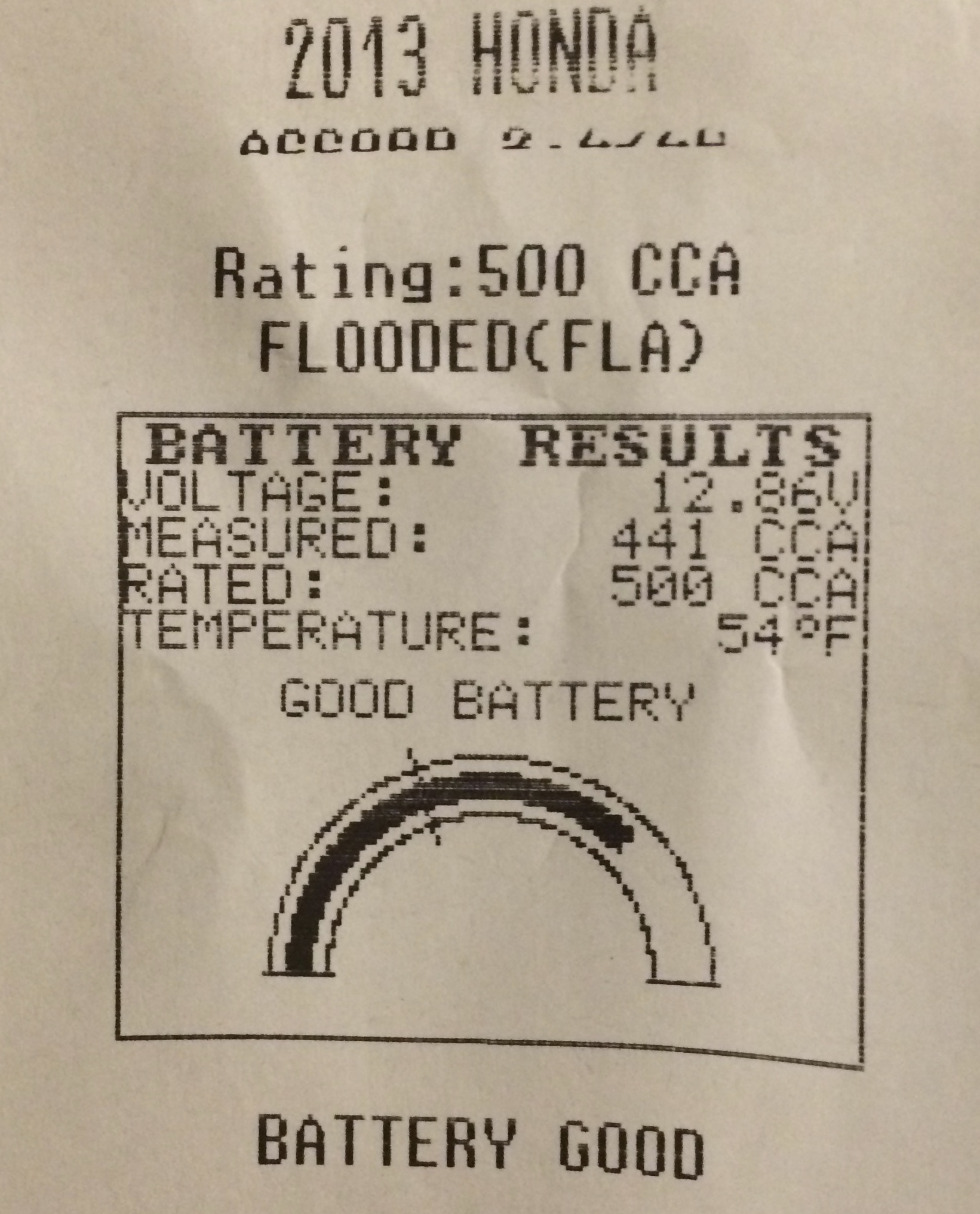 A 2013 Accord has three interior lights (the "dome" light and two "map" lights) - assuming you're using the standard halogen bulbs they are 8W items and the OEM battery has a capacity of 77Ah on the diesel and 47Ah on the 2-2.4 Petrols (not sure on the V6 off the top of my head) so even running all three interior lights for half an hour would have a negligible impact on a fully charged battery/healthy battery. Even a 47Ah battery will be able to deliver 1A continuously for 47 hours (at 80F) and still be at 10.5V! Obviously the 3 lamps running together will draw more than that - but not by much: ~2A without getting into tedious Peukert calculations suffice it to say that 2A for half an hour isn't going to be something a healthy Accord battery will even blink at.

(Related: In addition to the standard rule of the more Cold Cranking Amps (CCA) the better when picking car batteries another good guide is the "Reserve capacity" of the battery - which is the time the battery is supposed to be able to run the essential electrics of the car (nominally set a 25A) if the alternator fails, typically this is around 100-130 minutes, obviously the higher the better!)

So I don't think it can be considered "normal" for the interior lights to being on to have caused this so first thing I'd be looking at is the battery voltage sensor - they were a known issue on this generation of Accord and could lead to the car mistakenly believing that the voltage was too low to attempt to start the car.

Honda did a recall for this and you can check if your car is eligible here by entering your VIN.

Following the recent update from the OP..

Looking at the battery report I'm inclined to think the battery is good - the CCA is a little low given the relatively young age of the battery (although who knows how long it was sat in a warehouse before it was sold to the OP) but that's probably a red herring as 441CCA is still plenty to start the car.

Given it didn't start when jumped I think we can rule out a simple loss of charge as well.

The starter motor is a known weakness on these and has been known to produce intermittent starting problems - if your hearing multiple clicks or a "static"- like noise when you hit the button this is generally an indicator that the starter is the issue. The lights and dash display also support this theory.

It's also possible the dealership guy was on to something - a bad ground wire connection can also cause this and it's possible that towing to the dealer jostled it back into making sufficient contact for the car to start. Certainly worth checking the ground cable before going to the expense of replacing the starter! Sometimes with a bad ground you see pretty much all the dash lights flashing as you try and start it but not always.

A thought that just occurred to me is - are you getting the green light on the starter button? That's what indicates that the system can detect the key. I wouldn't expect the "Malfunction" warnings if that were the issue but.. it's still worth asking.

Take the added together wattage of all the bulbs that are to be lit, divide by 12 for the batt voltage to get the current used by the bulbs. Compare the number that to the amp hour rating for the battery which is NOT the cranking or cold cranking amperage. You will actually have to look it up. Then divide the amp-hours by the running amperage of the lights and you will get the amount of time in hours it should take to drain completely. This is not how long it would take to make it so the car will no longer start, as starting takes a great deal of power this time would be shorter.

Not the answer you're looking for? Browse other questions tagged starter battery-drain or ask your own question.