Design logic of the oil dispensing can's extra long spout which has no nozzle plug?

The images I'm referring to are shown below:

At a Hero Honda service center, I saw the mechanic using an oil can like the one in Figure 1. A cousin also said he used a similar one, so I purchased it and later regretted it because I could've bought four plastic ones like the one shown in Figure 2.

I'm using it to hold "Auto gear oil-90" (which I assume is 90w oil) with which I lubricate my motorcycle chain.

Questions: Since the chain is easily accessible from a distance of less than 5cm, I wondered why this metal can was designed with such a long spout? Won't oil evaporate from it when it is left unattended for long? Every time I squirt oil from it, perhaps half of the oil ends up falling to the ground after getting smeared on the chain. Also, the amount of oil getting squirted on the chain per-squirt seemed too much. I felt the oil flow could have been restricted if I had used the plastic can of figure 2. Or is it designed like this for any particular method of handling?

Along a second line of thought, I figured the metal can might actually be meant for lubricating larger machinery. But when I asked for a chain lubricant can at the auto-parts shop, I was handed the can shown in figure 1, so I figured it's purpose was indeed for chain lubrication. 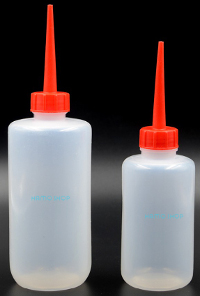 As far as the length of the metal tube, it's designed to get into tight places. It's used to transport oil and have a direct application purpose, so you can direct it towards your given target more easily. They are quite useful. These are often used to put lubrication onto machines while the machine is running. Having the long spout means your fingers/hands/extremities are not in harms way.

As far as the quantity of oil being dispensed from the can, that comes down to practice and control. Once you've used it for a while, you'll get the hang of how much you need to depress the thumb trigger to get the right amount. Muscle memory and all that. I'd assume it's designed to have the longer stroke on it so that someone who needs to have a good quantity of oil come out of the can would not wear their thumb out while pumping away at it. Like I said, you can vary the stroke of the thumb and control the amount which is expelled.

Not the answer you're looking for? Browse other questions tagged tools lubrication chain or ask your own question.

10
How does the change oil light system work and does it matter what type of oil you use for it to work properly?
5
What should I use to lubricate the flaps that controls the temperature and which vents the air comes out of?
1
whats the difference between the motul c2 and c1 chain lube oil?thanks in advance
5
Do good shocks have any oil below the top half?
3
How does a timing light detect the electricity in the plug wire?
0
Which is the Toyota specific toolset name in order to change head gasket on a ᴠᴠᴛ‑i engine?
0
Which end of the torx key should I be using?
0
The socket set that I bought has a security lock which I'm unable to open
0
Can an engine run without oil for a few seconds, if the oil change was just done