The guy at the just tire told me the alignment is not adjustable, I need new parts If i want to fix it, and also told me it won't effect the tire, is this true? One of my friends told me it will wear off the tires 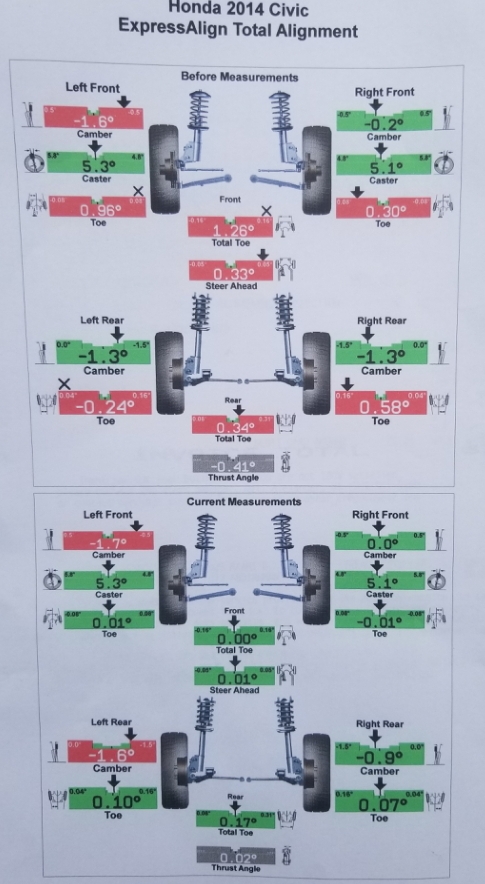 Well looking at that the alignment is definitely way out - The factory specs for the 9th Gen civic say front camber should be 0°, the camber at the front is adjustable via the bolt where the strut attaches to the knuckle. If the alignment guy was saying he couldn't adjust that it may be as simple as the bolt being seized or it could be that something else in the suspension is bent.

This is likely the biggest cause of your handling issues - and the alignment guy was (if you'll excuse me being blunt) full of crap. Running circa 1.5° negative camber over spec is going to make a substantial difference to the inner tire wear on that left front. Not to mention the fact that the differential will make it handle like crap! (as you've already discovered)

The rear camber isn't adjustable from the factory on these and while the left rear is only slightly out of range (factory range is -0.8° to -1.5° IIRC) the relative difference between the two is quite large. I'd hazard a guess that the left rear has the "original" control arm on it - which gave -1.5° and the right has the later "C" spec one that Honda introduced to reduce rear tire wear. To be honest running a matched pair one way or the other is fine - the -1.5° ones give better rear handling and stability and the -0.8° ones give better tire wear so I'd go with whatever your priority is. Running a mismatch however is not going to help!

8
Wheel Alignment: Just how bad is bad?
5
Had shocks, rear axle, tires replaced - alignment still out of spec and car vibrates?
7
Alignment is out of spec a tad - should I worry?
1
Wheel alignment. Should I have said something?
3
Is the 2008 Honda Fit Rear Left Wheel Alignment Not Adjustable?
8
Can I only get an alignment on new tires or is the salesman just being pushy?
2
Can I get alignment with only replacing 3 tires?
2
Wheel Alignment Still Feels Off After Getting Alignment