there are two serpentine belts in my car - One is solely for the alternator, and one is for the power steering, air conditioning, water pump, etc.

Just replaced both serpentine belts in my car, was not running into any kind of squealing before, but had not replaced the belts yet and the car was up to 90k miles. After replacing the belts, they started squealing.

Right now, the belts on my car will squeal if I turn on both my headlights and the air conditioning or heat in my car, usually when I come to a stop and idle, or slow down a bit.

Additionally, running the stereo fairly loud seems to bring on a bout of squealing from the belts until I turn it off.

I am getting the impression this is due to load on the alternator, but the tensioner pulley (which is my immediate thought of what would be causing this slipping and squealing noise) is for the other belt, the one that connects the power steering and such.

If I keep the load on the alternator low, I never hear squealing.

But if I turn on my headlights along with the stereo, turn on the fans in the car for air conditioning or heat, I start hearing the belt(s) squeal until I turn such things off.

Anyways, there is no tensioner between the alternator and the motor, it's just one belt that connects the two with nothing in between - at seemingly a static distance. It's installed by removing the bolts on the alternator so it can be moved into and out of place.

That said, I'm not sure of anything I could do to change the tension on this belt, so I'm not certain what to do to resolve the squealing.

The belt I replaced the original with was a bit cheap, could it just be a low quality belt?

EDIT: It appears that I need to tighten the tension on the alternator belt using the Adjusting bolt; I found a diagram that more accurately represents this setup (below) 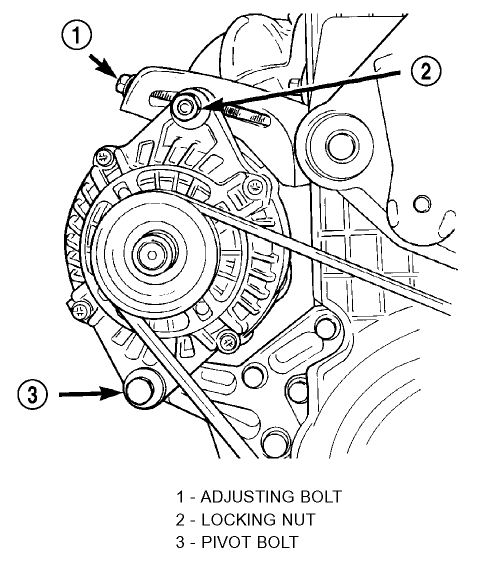 Anyways, there is no tensioner between the alternator and the motor, it's just one belt that connects the two with nothing in between - at seemingly a static distance. It's installed by removing the bolts on the alternator so it can be moved into and out of place.

The alternator actually pivots around the lower bolt, so you can remove the belt. The other bolt will be in a slot not a round hole, and the position of the bolt in the slot adjusts the belt tension. You didn't tension the belt enough when you refitted the alternator.

If you can find some instructions on how to change the belt they should tell you how tight it should be, but if you can depress it more than half an inch with your fingers (when the engine is off, of course!!!) it's probably too loose.

Loosen both bolts, then push the alternator as hard as you can to tension the belt while you tighten the top bolt. Then tighten the other bottom bolt.

You can see the guy demonstrating how tight the belt is, at about 3:20 in the video you linked to, but there wasn't a very clear description of how he was judging the tension was correct (and to my eyes, in the video it looked a bit loose).

If the electrical load is constant, the tension in the belt reduces as the revs increase, which is why it only squeals at low engine revs.

Not the answer you're looking for? Browse other questions tagged serpentine-belt squeaking or ask your own question.