What are problems, if any, in connecting accessories to 12v battery in Prius or other hybrids?

I am thinking of getting a portable air compressor (for filling tires) that clips directly to the battery because it can draw up to 20A. (As I understand it, the usual max in many vehicles for the lighter socket is 15A, so that is why this air pump has the direct connection.)

That would work fine in my conventional car, but would it still work in the future with a Prius or other hybrid? My concerns are two:

You shouldn't have to worry about accessing the battery directly unless you need to replace it. The reason is, Prius' come with a "jump point" at the front of the vehicle (under the hood). I'm sure different Priuses will have them in different locations, but here are the points as provided by Toyota of Naperville: 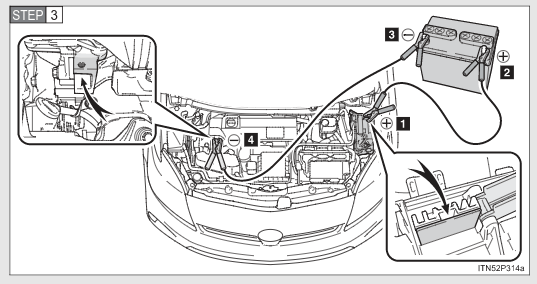 Some Priuses have the battery up front. If there, you can take the power directly off of the battery. If the 12v battery is located somewhere else, the jump point will provide more than enough amperage to power the pump.

Take for instance the 2011 Prius. It uses a 325CCA battery with 46AH reserve. While being much smaller than ones for a V6 (600CCA for my '08 Azera) or a V8 (600CCA for my '06 Silverado), is actually not that much smaller than the one in my '03 Civic, which uses a 450CCA battery. There is way more than enough power in your Prius battery to energize your compressor. You wouldn't want to continually use it without it getting recharged, because any battery will get run down over time. It will, however, provide way more than enough power to get a tire pumped up.

For Q1, organize a fused socket either front or rear or both.

For Q2, what sizes of 12v battery are specified in the hybrids?

Usually that capacity is related to the engine size and starting requirements. Which means that the battery will be small for 1 litre engines and have a larger capacity for a 3 or 5 litre engine.

The 12V battery in Prius is not a starting battery. Thus, you cannot expect to draw hundreds of amperes (well, hundred may be okay, two hundred a borderline, three hundred I wouldn't draw). However, 20A will absolutely not be a problem. It's only about 250 watts, far less than what the HV-12V DC-DC converter provides in the Prius. You can draw 20A with the hybrid system on or off, if it's off then drawing 20A for multiple hours continuously will drain the 12V battery. If it's on then it will be recharged with gasoline.

I don't think you plan to fill tires for multiple hours, so the battery current and capacity requirements are satisfied.

By the way, have you considered a bicycle track pump? If the tires are not completely empty of air, you can with little effort fill them to the ideal pressure with a track pump, no electricity needed. A good pump doesn't require massive effort for that. Increasing pressure from 2.2 bar to 2.5 bar on all four tires doesn't even make you sweat.

What Solar Mike said about engine size and capacity doesn't apply to hybrids, as the internal combustion engine is started by a high-voltage battery. Thus, a 1.8 liter engine in Prius has smaller 12V battery than a 1.8 liter engine elsewhere.

Not the answer you're looking for? Browse other questions tagged toyota battery hybrid prius or ask your own question.

1
Is this plan to use old 12V battery until it fails a good one?
10
Why do attempts to charge a flat car battery with an electronic battery pack give results as if there's a short circuit?
2
What are the ramifications of leaving the Honda IMA battery "dead"?
4
Prius (2nd generation): 12v battery keeps dying
2
In Toyota Prius and Ford Fusion Hybrids, at what max speed can it go with only Electricity?
3
What is the typical longevity of NiMH battery packs used in non-plug-in hybrid cars?
3
Car battery disconnection for charging
1
Modifying air conditioner to run without key inserted? (fan only, not temperature regulation)
0
Can you charge a car/motorcycle battery with a portable power generator?
1
power drain and sometimes will not jump