Starting an automatic for the lazy mechanic

I have an ignition problem with my 1985 Mk1 Golf Cabriolet Automatic (1.6 EW engine). I was watching a YouTube video where the mechanic was testing the crank position sensor in on of these cars (it's contained within the body of the distributor) and he grabbed a relay which I assume was part of the interlock circuit, bridged two pins and the car started.

I know that he had the car in Park, had the keys in the ignition and in the "run" position but I would like to know which pins he bridged. I assume it's similar to making the exciter cable on the starter live but the fact he did it on a relay seemed quite appealing.

Reason I ask isn't really through laziness. The layout of my garage at the moment, coupled with the fact I've got three sets of wheels and tyres along the wall, means it's a bit of a pain to reach the ignition key without lots of climbing and squeezing into small spaces. If I can set the key to the run position and then just bridge to pins to try to start the car, it would save me a significant amount of time.

If your starter relay is similar to this relay on the Farnell website. 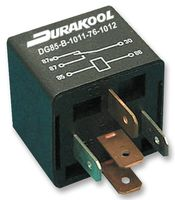 Then you need to connect the pins labelled 87 and 30 together.

We used to use the "push button" from a Commer van connected to the battery plus and the starter solenoid...

That was a Lucas part (Prince of Darkness... :)) and capable of supplying the older solenoids that took 50A inrush etc...

Not the answer you're looking for? Browse other questions tagged automatic-transmission wiring relay or ask your own question.