On a Subaru 2013 since 70,000 miles I've had the fun P0300 code activated and my check engine light on, cruise and traction control disabled.

I do not have any other misfire codes being shown(unlike other questions) and sometimes the misfires occur so infrequently that the error code is disabled, then randomly comes back. Their is no noticeable difference in the performance or drive-ability of the vehicle. Since it's only annoyed me and has not significantly affected the drive-ability of the vehicle, I've been ignoring it for 30,000 some miles. It's doesn't seem to be getting any better or worse in that period. Periodically, I've tried various things to get to the root of the problem. They are as follows(first the basics, either it's a issue with firing, fuel, compression, air right):

Fuel - Put a few "Fuel Injector Cleaning" products in the gas, no affect.

Fuel - Tested pressure, I think... it's right, hard to figure out exactly what it should be in the manual, but here's my numbers(it's definitely got steady pressure):

Air - Vacuum Test, again I think this is right, hard to find a good line to test but here's my results:

Compression - (I have not tested the compression yet, two of the spark plugs on this car are tough as heck to get at, is this the next step?)

Electrical - Checked the spark plugs(the two easy ones), they we're all 4 replaced at 40,000 so at 70,000 there still pretty new, in fact on inspection they look brand new, the gap is correct, they literally look brand new out of the box.

Electrical - So then I started to do some more research, it seems I'm not the first person to have this issue with subi's, This is just great.... Apparently they've had issues with the main wiring harness. In fact on new harnesses they've moved the ground point. So I could order a new one and take my whole car apart to install it :(, It's cold where I live so I decided not to do that or spend $1,500 for the dealership to do it, instead I tried the fix outlined in this post. Unfortunately there was no affect, that doesn't seem to have been the issue, or at least if it was the fix suggested didn't fix it.

Electrical - I bought a cool little "ECU Scanner", and a pro version of some app that allows me to access the hidden parameters of the subi's computer. Specifically there's a little memory address that records when the crankshaft position sensor logs a misfire. The data returned was interesting. 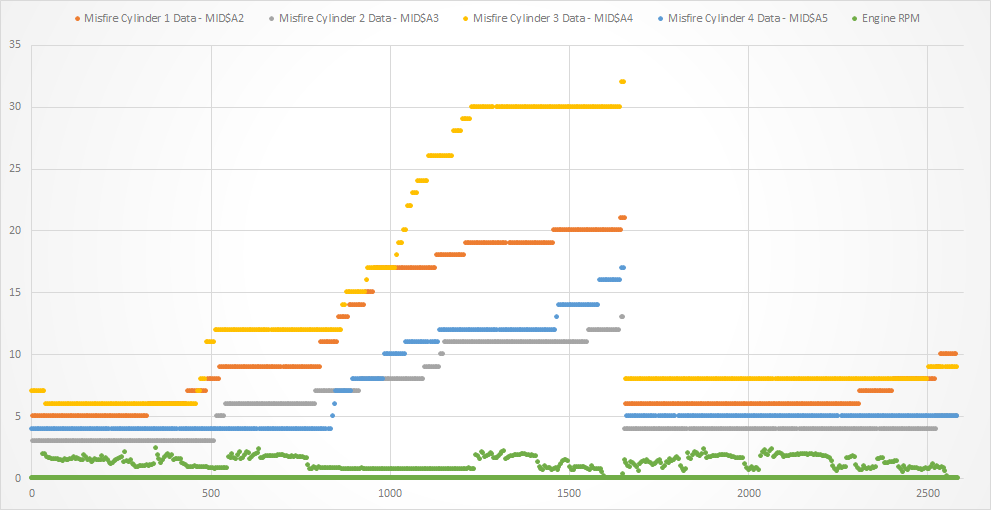 So, I'm kinda stumped on this one, should I just move to the compression test? I have a good understand of what is going on, and when it's going on, but not the why it's going on, feels like I'm throwing things against a wall until they stick. Is there a better way to do this?

(Update 1) - Replacing the downstream O2 sensor has been suggested. I might try that. I'll also try to get some data such as air fuel ratio at idle/drive. I've also wondered if it's the Crankshaft Position Sensor, I could replace that easily too. If I do any of these things I'll update my post with the results.

(Update 2) - It's been very cold so I haven't done much, but as suggested by @SteveRacer and @Ben I've gathered freeze frame information and posted it below:

Browse other questions tagged subaru misfire wrx p0300 or ask your own question.