How is the liquid refrigerant distributed throughout the system before start

When an air conditioning system is at rest (eg before starting) how is the liquid refrigerant distributed throughout the system? I would think that the expansion valve would remain slightly open, allowing the liquid part of the refrigerant to flow at the bottom of the system and the vapor at the top. If this is true, how liquid refrigerant is prevented to flow into the compressor?

Ref pic below: Do we all agree that the gauges on the manifold set are indicating a relationship between gas T and P and that this relationship would only be true if vapor pressure exists (liquid phase in the system)? The gas pressure in the system (no liquid phase) will not provide a correct T for the P indicated. 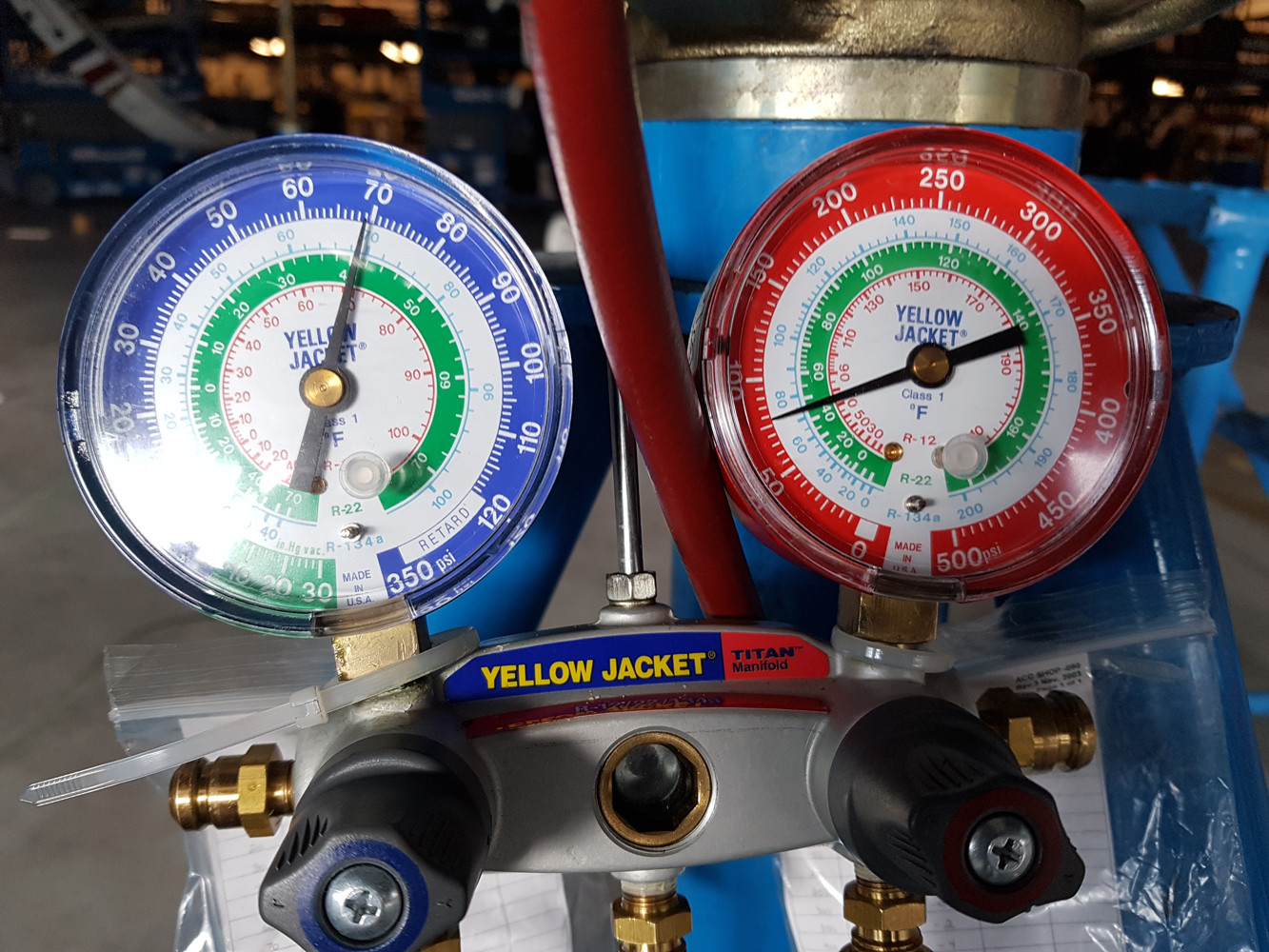 First of all, yes, there is always liquid refrigerant in the system at idle.
Looking through tables, the minimum amount of R134a in car ACs is about 500g, some cars have twice or more.
[chemistry] 500g R134a is about 5mol, which has a volume of 115l (30gallons) at 25°C (77F).[/chemistry]
Now, we know that at that temperature, the AC system has a pressure of about 5Bar (72psi), which by the way is the pressure shown on the gauges on the picture.
Applying the ideal gas equation V1/V2=p2/p1 and the given amount, at that pressure, the gas (and so the AC system) should have a volume of 115l/5=23l (6gallons).
Since a cars AC system for sure does not have this volume (may be larger cars, but they also have more refrigerant), there must be liquid R134 in the system! (Keep in mind, the ideal gas equations are only valid for ideal gases. Many gases can be treated ideal, but only when far away from their boiling point)

When sitting idle, it is very likely that there will be liquid refrigerant around the compressor, since it often is the lowest mounted part of the system.

I can't back it up, but I think liquid refrigerant in the compressor is not as bad as water is for a combustion motor. In a combustion motor, cylinder valves are opened into the inside, and higher pressure inside closes the valves even harder. But in a compressor, the outlet valve opens outwards when the pressure is high enough. So, liquid in the cylinder (or what ever it is) can escape and does not cause hydrolock. This does put stress on the compressor, but as long as this only happens when switching on the AC, and not always, the compressor can take it.

There shouldn't be any liquid in the "intake" side of the system. This is largely prevented by the Thermal Expansion Valve (TXP), or on older vehicles, an orifice tube. These parts reside in, or just before, the evaporator - the heat exchanger internal to the vehicle in the HVAC housing under the dashboard.

At normal "at rest" temperatures and pressure, all the refrigerant will be in a gas phase. Exacly like Paulster opined.

Provided the system is not overfilled, the refrigerant will remain a dense gas until compressed and the temperature lowered - this pressure comes from the compressor, and the gas-to-liquid phase change will occur in the condenser (another heat exchanger, usually in front of the radiator).

If liquid were allowed to reach the intake side of the compressor, the unit would "hydrolock" and likely destroy the compressor if you weren't lucky enough to burn or break the belt first.

@Simone I'm not sure exactly what you are saying, but most gases have a fairly high boiling point compared to refrigerant. (R134a is about -15 degrees F). I'd rather call it "gas pressure" than vapor pressure, but in any case you can put thousands of psi of oxygen, helium, argon, and carbon dioxide in a tank, but none of it will be in liquid phase at normal "human" temperatures.

It all follows the Ideal Gas Law, PV=nRT, where pressure * volume is proportional to the moles (amount) * temperature * a constant (measurement units). The liquid phase (if any) is comparitively un-compressible (which is why it would break the compressor) and would not affect the pressure of a manifold gauge set reading. The gauges have no clue about temperature, only gas pressure. (There are fancy manifold sets with thermometers built in, but the gauges are still ignorant of temperature.) A chart is needed to determine if the observed pressures are appropriate for the specific refrigerant type and operating temperatures.

At rest, since I'm fairly certain all [R134a] refrigerant will be well above -15 degrees F, there should be no liquid anywhere in the system. As temperature increases, so will gas pressure. If pressure decreases suddenly, as with a small orifice discharging into the evaporator, a severe pressure drop must beget a severe temperature drop, since volume, moles, and the constant are not changing. Viola! Enjoy the "air conditioning"...

10
How do you detect and deal with a refrigerant leak?
7
Does R-134A refrigerant normally have oil (liquid at room temperature) in it?
7
How do A/C professionals dispose of refrigerant?
2
Is there any benefit in turning off the air conditioning before the end of the trip?
2
Do I need to add oil if I evacuated the old refrigerant and replace it with a new refrigerant?
2
How are AC leaks detected?
8
Exactly how much refrigerant is in there?
0
What is the purpose of high pressure service port in cars ? Can we charge refrigerant into the system by high side service port?
1
How much Pag oil should be added after recharging refrigerant?
0
Is there a cheap way to recover refrigerant from an AC system