Which side of the engine does this mean?

I inherited a '79 F-350 along with its half-rebuilt 400ci. The push rods, rocker arms and lifters are (somewhat) neatly placed in a labeled box, but I'm at a loss as to what the fellow meant with his labels: 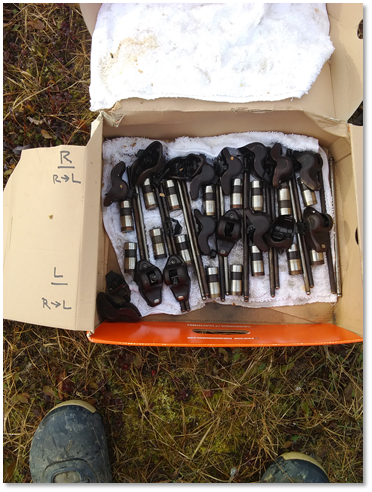 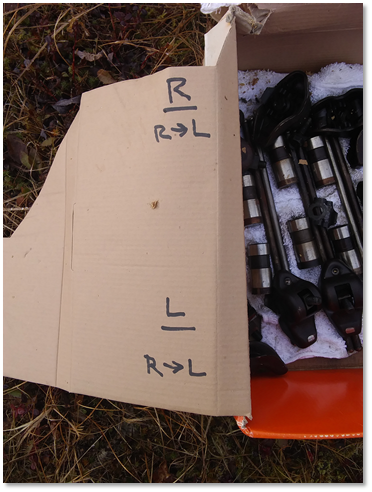 Right/left is ambiguous, depending on which way you're facing. Which label is the driver side and which is the passenger side (in America)?

We cannot not tell you what the author of the notes was thinking exactly, but typically, you look at right and left as though you're sitting from the driver's seat. It would have been much better had they marked it as 1-8 for the cylinders, but with that being said, I'd just go with what is typical for R and L from a mechanic's standpoint, as I've already detailed. I'd also suggest where the writing is would be for the front of the engine. Looking at the images again, I'd feel confident in both of these assessments as it makes sense. If you align the writing from the front of the engine with the arrows pointing towards the rear, the R and L line up.

"Right" and "Left" bank is usually considered from the perspective of the driver's seat. It get's less clear when the engine is mounted transversely... front and back are obvious, but "left" would refer to the bank that would be on the driver's left IF the engine were installed longitudinally. Cadillac Northstar, for instance.

Frankly, if you don't want to buy new, just measure and mic everything to see if there is anything out of spec. I don't think those parts have any "handedness", and keep in mind you'll have to adjust valve clearance anyway. It's very likely all the intake and exhaust pushrods and rockers and lifters are identical - with the possible exception of wear.

Buy new. 351C/400 parts are dirt cheap. You can probably get an entire valvetrain kit from a place like Summit or Jegs, and maybe avail yourself the opportunity to buy new performance cams suitable for your purpose as well.

To answer your actual question: I have no idea. Even if I knew, how would you identify which rockers are paired with which pushrods? How can you be sure the whoever removed the parts followed the convention?

If it was me, and I knew I was going to reuse the components and cared, I would have put each set in a ziplock bag and labeled them by cylinder number. I doubt I would be that concerned, since there's no way I would put the engine back together without checking and adjusting valve clearance. I realize this is little help to you now.

Not sure if this agrees or contradicts the other answers, but I would have thought that the guy doing the disassembly would initially be stood in front of the car looking at the engine. The cylinder head on his left would have been ‘L’ and the one on his right would have been ‘R’.

Then when he moved to each side of the car to disassemble each head, again, the cylinder on his left would be ‘L’ and the one on his right would be ‘R’.

Not the answer you're looking for? Browse other questions tagged engine ford f-350 valve-train or ask your own question.

5
Which engine part is this?
4
What does BHP@rpm mean?
17
What does it mean to retard an engine?
16
What does a liter class engine mean?
7
Which side of the engine is the “front”?
1
Does Cylinder misfire mean buy new engine?
4
If an engine starts does that mean compression is fine?
0
If the check engine light is off does than mean your car is fine?
0
What does this engine weigh?