How to fix a speed sensor signal problem?

I am trying to troubleshoot a problem I am having with the speed sensor on an older automatic transmission, and I have to admit that I do not understand electrical properties of the way this speed sensor works.

As background here is the description from the electrical troubleshooting manual:

Output Shaft Speed Sensor –pins 2, 38, 20 The automatic gearbox system incorporates an output shaft speed sensor which is input to the Auto Gear Box Control Unit (Z255) on pins 2 and 38 with a screen over the cable attached to pin 20. It is important that this signal is screened correctly.

And here are the wires in question from the wiring diagram: 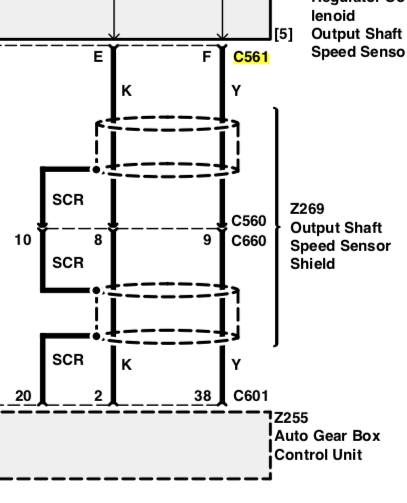 This speed sensor is not a Hall sensor, it is just a two wire sensor and is associated with what I understand to be a (36 tooth?) tone ring.

I have checked the resistance/continuity in the wiring and at connector C601 to the transmission computer I get a resistance of 312.8 Ohms across pins 2 and 38. I also opened connector C660 and looked at the resistance between that an C601 and generally got values in the range of 3 Ohms, which I thought was a little high, by poking my probe deeper into the connector I was able to get a 0.3 Ohm reading. This is 19 year old wiring so that might just be oxidization in the connection. I am pretty certain this is the first time this connector was opened in that time, it is inside of the truck under the center console.

I have replaced the sensor thinking it was the problem, it did not help. I understand the DC wiring well enough to troubleshoot most things, but this AC signal stuff is voodoo to me. What is the role of the shielding? It only appears to be connected in one location, should it be grounded at the other side?

If there is something wrong inside the harness how would I test that in this case?

How could I patch this and replace the sensor connection, what kind of shielded wire would I use?

As was suggested I got a new transmission controller computer which produced the same results. So, I still think the issue is in the shielding or inside the wiring harness. I still don't know how to test this.

If this is a variable reluctance sensor, then the "Auto Gear Box Control Unit (Z255)" may need to supply a bias current in order for the sensor to work properly. Try replacing that unit.

Not the answer you're looking for? Browse other questions tagged sensor troubleshooting or ask your own question.