Whistling sound in cabin with engine off?

Two days in a row, after turning off engine, parked, this long tone at 1.1947 kHz appeared and then faded away: https://clyp.it/xedrwsuh I just happened to be recording and caught it on the 2nd day. I've heard it in the past, but rarely, and assumed it was another car's brakes, etc.

Then turned the engine back on, and two short whistles happened at similar frequencies, but jumping from lower to higher: https://clyp.it/jkycuejh 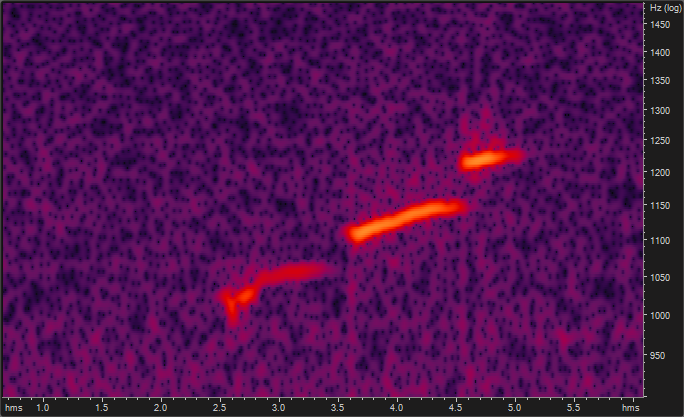 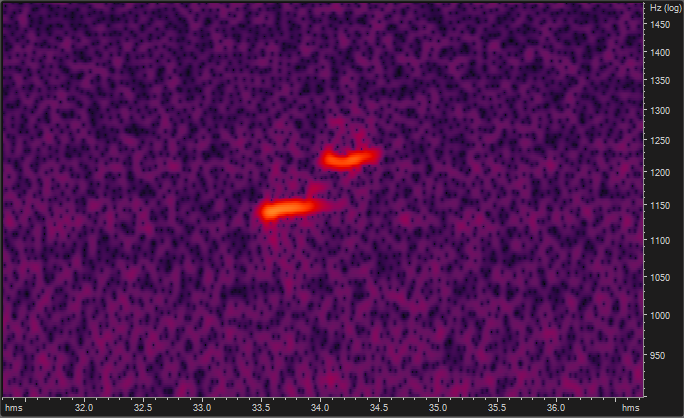 Or, if you have vacuum control of things like heat/ac, headlights, etc. When the car is turned off the vacuum accumulator can pull in air through any small hole or leak in the vacuum system. It's usually high pitched and usually lasts for less than a minute.

How do I know? I used to have a 280Z with vacuum hvac controls and that was one of the clues that I needed to track down the leak(s) in the system. Usually the end of the tubing where it attached to the reservoir or the actuators.

Sounds like acoustical feedback in the audio system. Might you have a device (e.g., phone) plugged into the "aux" input in your dashboard stereo system.

One possible source of unusual sound after engine shutdown is air conditioning (A/C) refrigerant pressure equalization. Does this sound occur on hot days after running your A/C? On a hot day the pressure of refrigerant in the condenser inlet is 350psi or so. Pressure in the evaporator core is around 30 psi. When you shut the vehicle off there is refrigerant flow through the oriface tube / thermal expansion control valve for 30 seconds or so after vehicle shut down. And that flow can definitely create weird harmonics.

What is outside temperature when you notice the noise? Is A/C on? Is this possible source of that noise?

Not the answer you're looking for? Browse other questions tagged noise or ask your own question.

8
What Could Cause a Sudden Loud Noise When Driving on Highway?
4
'66 Dodge Dart made a loud CRACK, engine almost stalled. The second time it happened, there was a puff of black smoke
4
Diagnosing a rhythmic engine noise
7
What is the cause of this strange engine noise and white smoke from the engine?
2
Rattle sound at low speed in 1st and reverse
4
Would a torn inner tie rod noise reduce in occurrence and severity when the car is warm?
2
Sucking sound from engine!