What is exhaust gas recirculation?

Is this the right interpretation or is there more to it? I'd be open to some good books or other sources to learn about the relation between AFR, NOx emission, CO emission, detonation or knocking, preignition and other similar things.

I think, there are a few more points, and the differences between diesel and petrol engines.

A diesel engine has no throttle and always ingests the maximum amount of air. It varies the amount of fuel injected to control power, but in general, it burns with a high excess of oxygen. Heat and excess of oxygen cause production of NOx.
Adding exhaust gas to the fresh air in the intake lowers the amount of oxygen which could react to NOx. Since it also contains some water with high heat capacity from the last combustion, the total heat capacity in the cylinder increases. This means the maximum temperature during combustion is lower, and that again reduces NOx. The one and only reason for EGR on diesel engines is the reduction of NOx. Unfortunately, a diesel engine needs the excess of oxygen and starts to produce lots of soot if it doesn't get it. So, adding exhaust gas to the point where there is no excess doesn't work. Simple catalysts as in petrol cars since decades can not do much of it. That soot clogs them over time, and in general, they do not work with excess of oxygen. That's why diesel catalysts are complex with SCR etc.

A petrol engine is different. It has a throttle which reduces the amount of air ingested, and the exact amount of fuel, which can be burned with the amount of oxygen, is added. Theoretically, a petrol engine produces no soot and no NOx. But in reality, the fuel is never mixed perfectly with the air, so there are leaner and richer regions in the cylinder, and the engine does produce some of that stuff. But since the amount of oxygen bound in NOx is the amount needed to burn the soot (and unburned fuel), a catalyst can do a fairly well job here.
The main reason for EGR here is to reduce fuel consumption. The trottle is opened only partially most of the time, and restricts the air flow. Though this is needed to control motor power, it also means the motor has "to breathe through a straw". And that costs fuel. With exhaust gas added, the motor can breathe more freely, and consumes less fuel.

Of course, not producing NOx is better than converting it in the catalyst, which also plays a role when adding EGR to petrol engines.

(And it is not true that fuel mixture is exactly stochiometric, petrol engines also play a little with the ratio)

From everything I've read, you're idea of what NOx is and does is correct. From a strictly technical sense, I'd substitute the term "introduction of inert gas" as opposed to "reducing the amount of reactable air". While technically speaking you are correct, the idea is to introduce the inert gas to control the burn. This brings down the temperatures in the combustion chamber and reduces the amount of NOx produced during the combustion cycle. Any inert gas could be introduced into the air/fuel mixture to control the burn. Since exhaust gasses are readily available, that's what's used.

The Wikipedia article on EGR is a pretty good resource for general knowledge. If you look down at the references and sources sections, you can find all kinds of places to look for further reading.

Your description is dead accurate. I would add that the EGR system is deployed mostly at cruising speeds, when the engine's combustion is closest to the ideal, 14:7 stoichiometric ratio of air-to-fuel. At that point, the flame is clean and hot, which promotes undesirable levels of heat and oxides of nitrogen. I've seen it estimated that the EGR system substitutes 15-20% of intake at its maximum.

Here is a chart I once found illustrating this relationship: 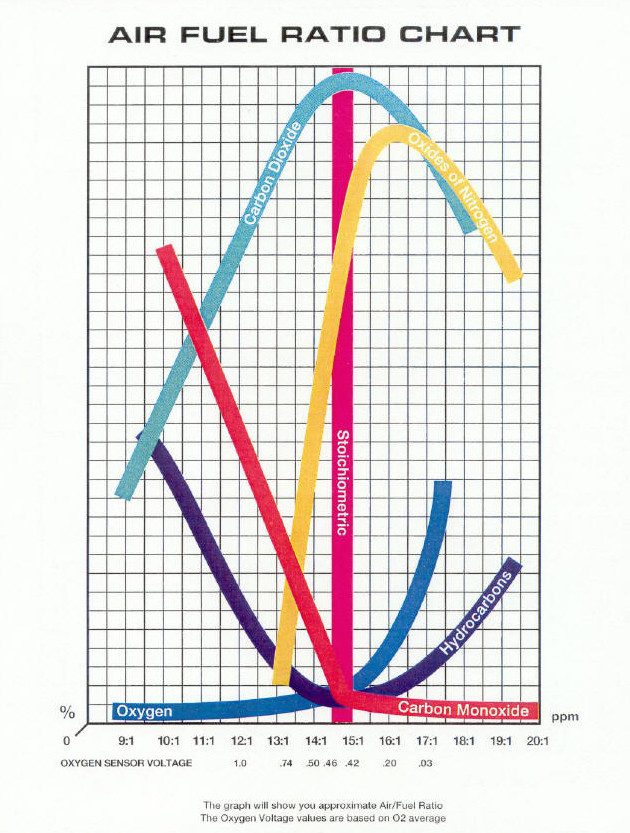 Not the answer you're looking for? Browse other questions tagged exhaust emissions knock egr or ask your own question.

7
What effect will removing my EGR have?
2
What is this exhaust type thing?
38
What does a water like drop coming out of the exhaust of the car signify?
4
Exhaust on a replaced motor
21
What does pie cut exhaust mean?
32
What is the point of the exhaust?
2
Is this a good explanation of EGR principles?
4
Effect of smoke ingestion on fuel injected car engine?
0
Can exhaust problems cause a knocking sound in anyway?