Car won't start, horn won't honk, headlights won't come on, what could cause this?

Car wouldn't start today. In the past had occasionally had it hiccup before starting but that was the only indicator of problems. No accidents or special maintenance done recently that seems to be linked to this issue. Did replace the starter twice (first one didn't last long), but that was about a year ago. Symptoms don't seem to be acting like it did with a bad starter.

Turning key to I position

Any idea to the nature of this issue? It seems pretty obviously to be electrical, but are we talking bad relay (all seemed good under the hood), bad fuse (all seemed good that I tested), or bad wire (I didn't seem to get a voltage reading to the headlight fuses, not the high or low beam for either left or right side headlights). Is this maybe a short? Do I need to trace the wiring from X to Y and check for any fraying, lose connections, etc.?

Turned the headlights on and put the multimeter on the battery terminals. Voltage was jumping all around as I heard the same clicking noise before. Voltage was in the 9.XX range to 10.XX range. A few times it managed to jump up to a low 11.XX range. So it does seem like a battery issue. Will be swapping it out later when I get the chance and will confirm that this fixes my issue.

Was able to jump start the car with another good vehicle. Wish I had tried that yesterday instead of the hours and hours of testing electrical connections. Thought I had been doing well by having the battery tested FIRST. Even tried with a multimeter to confirm, but should have tested it under load (forgot about that detail). Could have saved me quite a few hours and having to go into work late. Now I'm off to go buy a good battery and swap it out for this dead one.

Thanks for the help everyone!

The symptoms all point to a faulty battery, and an incorrect test result for the Autozone battery test.

Starting with this: Hitting brakes: Brake lights come on and interior lights dim: a good battery should have no problem driving both the brake lights and interior lights without dimming. The same goes for many of the other tests you've done. If switching on a component that draws 10 A causes dimming, your battery is never going to be able to supply several hundred A to the starter motor.

Try testing the battery voltage under load. Switch on the headlights and measure the voltage. If it's still 12.7V on the battery terminals, one of the battery leads may be broken or corroded. If there's a big voltage drop, the battery is faulty.

All symptoms point to a dead battery, but as you have already attempted to rule that out, the next thing I'd check would be bad connections or cables.

Turn on the headlights or something else that consumes a fair amount of power - this makes the results of these tests clearer. If the battery is fine, the voltage at battery terminals should stay close to 12 V.

Similar test: try to check voltage between the positive and the negative terminal at different points along the path from battery to some device. If you find a spot where the voltage is significantly lower than at battery terminals, the faulty part is towards the battery from your test point (along either positive or negative lead).

As others have noted, corroded or broken battery terminals could be the cause if the battery voltage seems good. In that case you want one of these, available at any auto parts store: 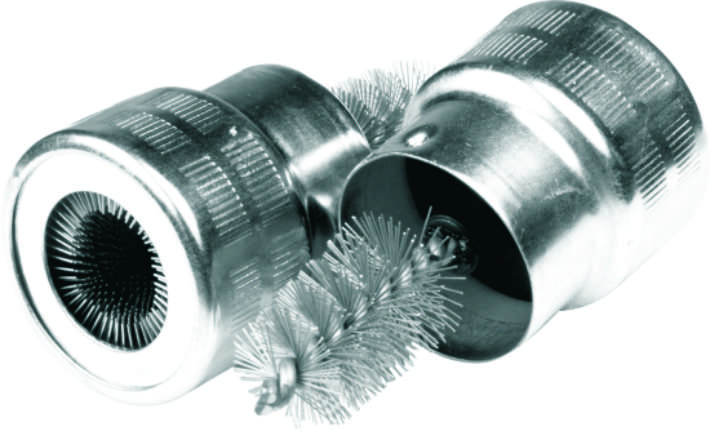 Use it to clean both the terminals on the battery itself, and the inside of the clamps. Then apply conductive battery terminal grease, reattach, and tighten.

3
The car makes clicking noise when i try to turn on the engine. What could be the problem?
1
Electronics not working after trying to replace stereo
6
2004 Honda Odyssey won't start for a few seconds after key moved to ON position
2
2011 ford fusion SEL , All lights work good, Battery good, Connections good, Fuses good, won't turn over or even click, Why?
3
Pontiac Grand Prix won't start, horn would honk, electrical system goes crazy
0
2012 Honda Fit Won't Start - No Accessory power, only dash lights