After a customer had destroyed his engine(wrong fuel), the engine was replaced by my colleague with a 2nd hand one from a running car. However, it won't inject or spark when starting. It concerns a 1996 Volvo 960 with the 3.0l 24V inline-6 engine, with the Motronic 4.4 system. The original wiring loom and ECU are used, both of which were doing well before.

My observations:
There are no fault codes stored, and the CEL is off during prolonged starting.
There is no immobilizer on the ECU.
It is constantly on the charger and booster during starting, so low voltage is not an issue.
It is an automatic, but the P switch is not used and wired as 'always P'.
The injectors inject a few times when turning on the ignition, so the ECU is able to operate them. I can also operate each injector individually with the Bosch ESI tronic OBD reader. They don't inject after that anymore when trying to start. All ignition coils are provided with system voltage as soon as i'm trying to start, they are just not connected to mass by the ECU.

I have tried:
-Naturally, my first suspect was the crank sensor, but the flywheel is completely intact, and the (new)sensor gives a (good?) signal. (450mV triangle wave visible on the scope) 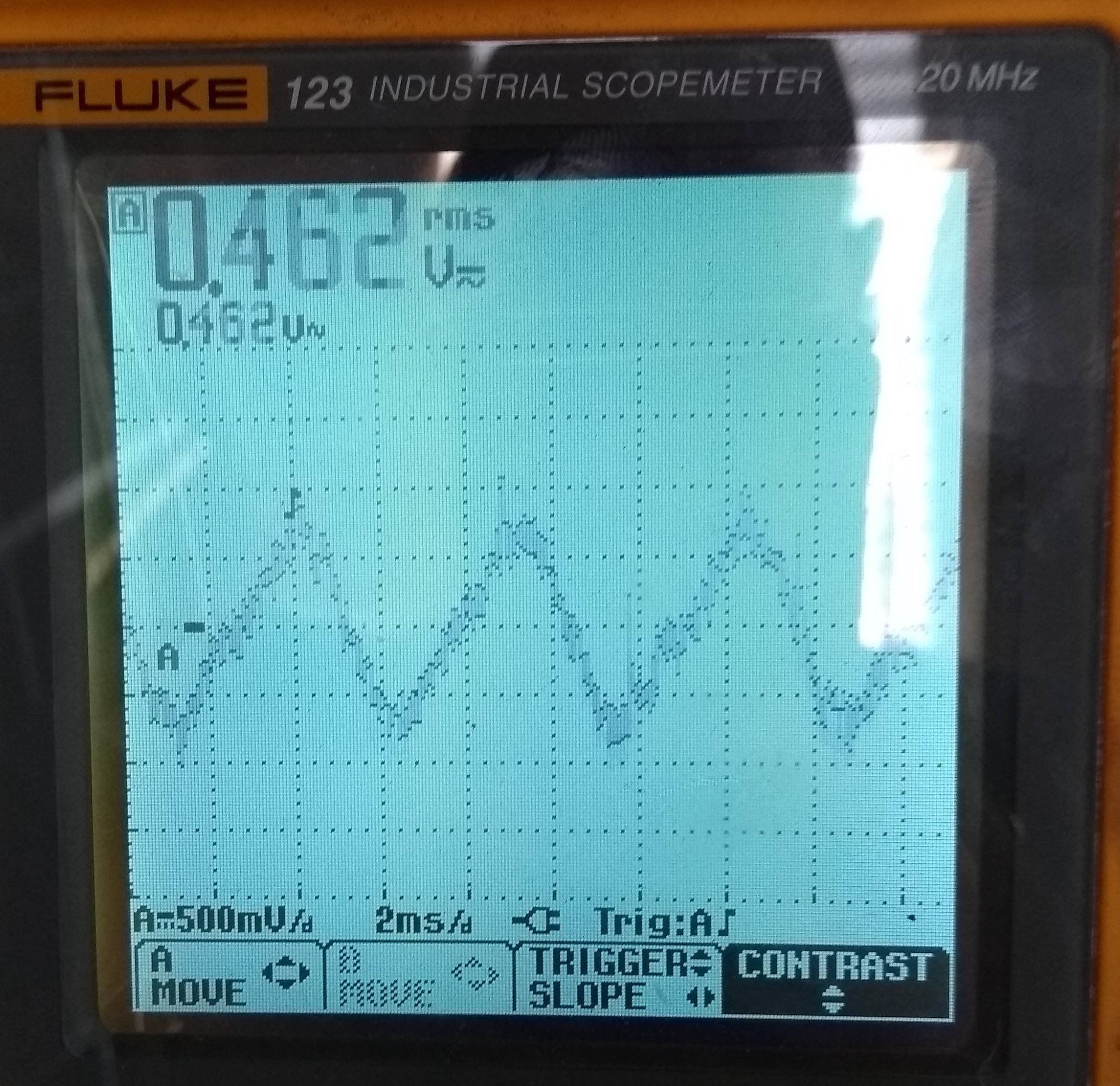 -The camshaft sensor(also new) also gives a good signal, being a clean square wave of several volts. I have measured both at the ECU with the ECU connected.
-I have used a new ignition module.
-I have used another ECU. (also without immobilizer)

My conclusions:
Since there are no fault codes and no CEL, there should also be no NoStartCondition. There is a camshaft and crank signal at the ECU, so the ECU should know the engine's position and speed. The ECU is able to operate the injectors, but chooses not to do so. It is unlikely that the ECU is not able to operate the ignition, since the injectors are also not operated. It is likely that the engine's speed/position is not correctly received. It's likely something mechanically is amiss, since there are no fault codes.

Things I haven't tried yet:
Operating the ignition coils manually. I can't do that via OBD, and I don't know the signal that should come out of the ECU. Hence, I don't know what signal to give to the ignition module. If anyone knows, please tell. This would rule out the entire ignition system, leaving only the ECU and crank/cam sensor.

Here is the wiring loom of the concerning systems. It's in dutch, so if you have a question about a component, i'll translate. I've marked the most important ones already. I hope it's visible. 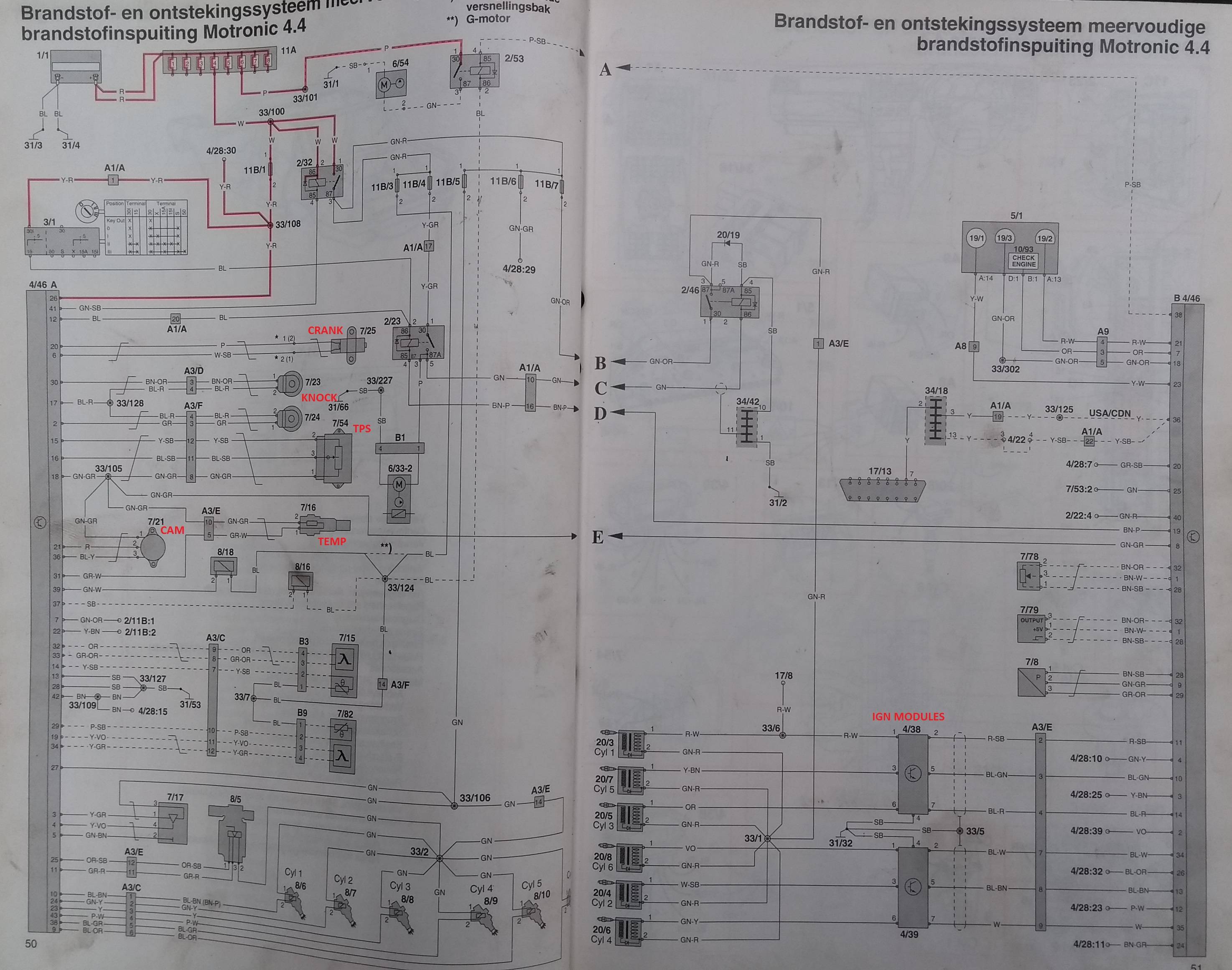 I have solved the issue, and it shows how important it is to check for differences when swapping parts like the engine. That's why i'm making this an answer.

I did verify that the ECU, ignition module&coils, and crank&camshaft sensors were all in working order, by testing or using them from another fully working Volvo 960. So logically thinking, that would only leave the flywheel or mounting position of the crank sensor, since there were no fault codes.

I did measure the crank signal with a working 960, and compared it with what I measured on the broken car. Both showed a sine/triangle wave, but I couldn't find a flat spot(indicating fixed point on flywheel before TDC) with the broken car, while I could do so with the working one. Here's the comparison between measurements on the scope, left the broken one, right the working one: 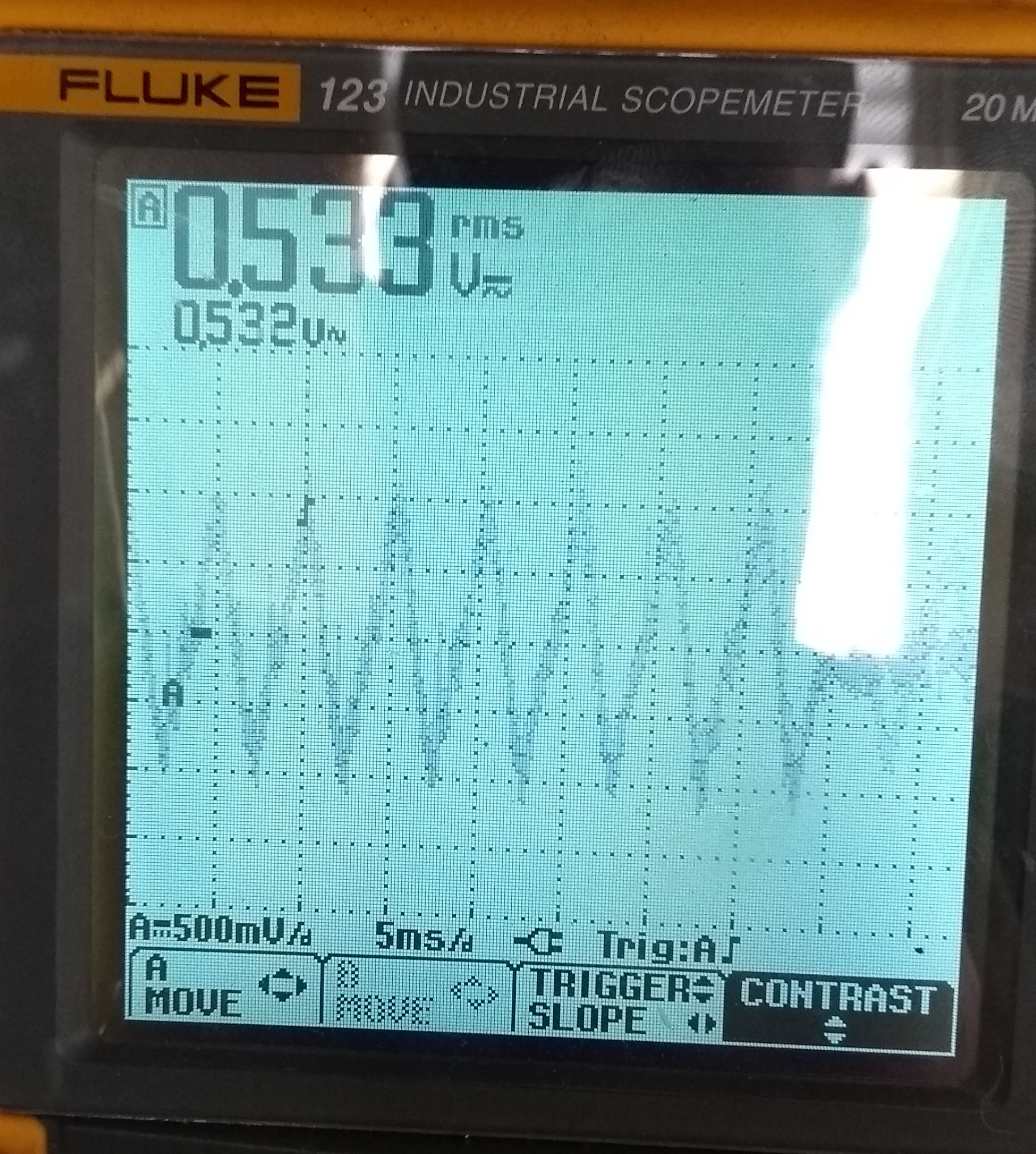 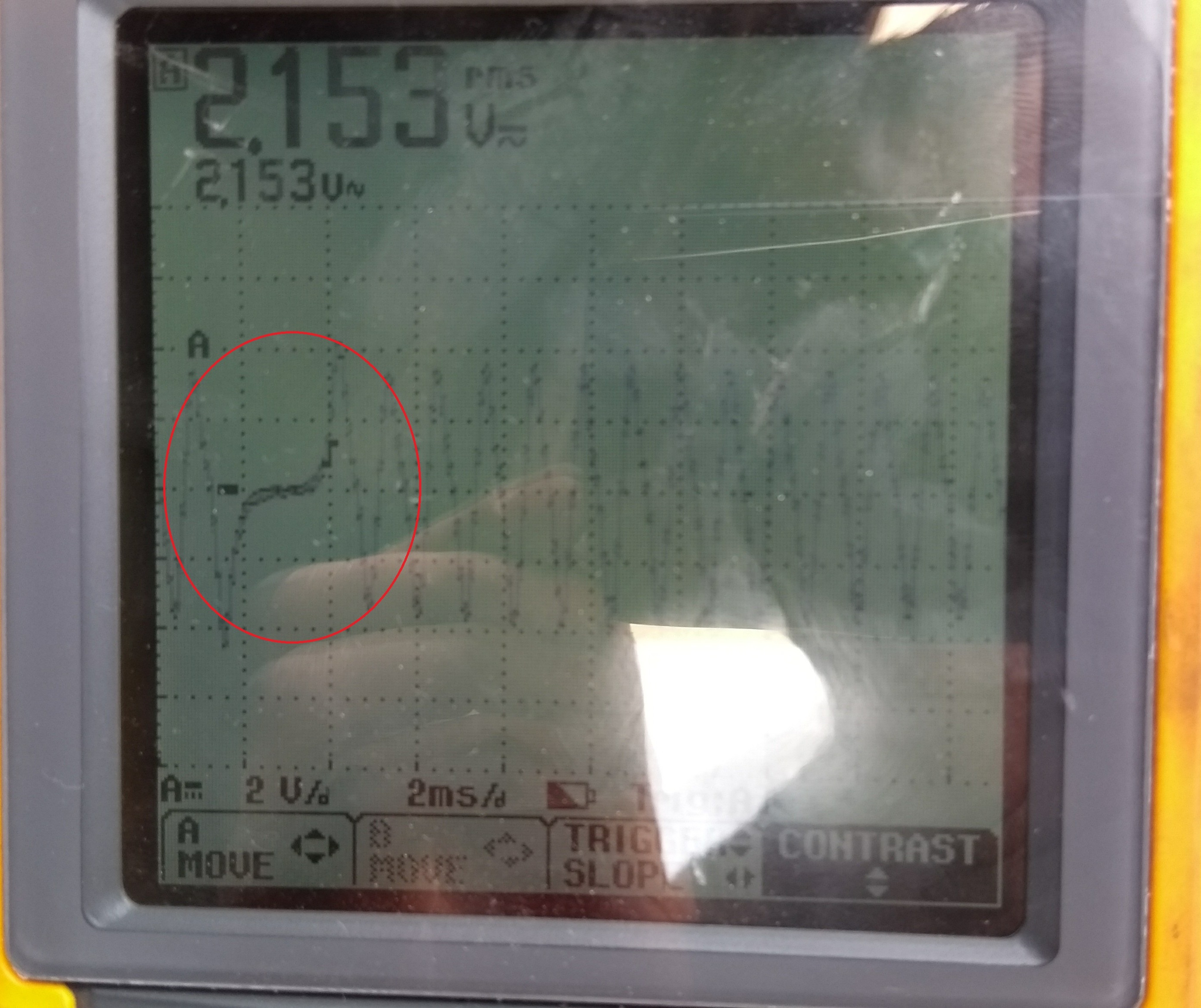 You can see that a flat spot in the graph could only be found with the working one. They both use the same sensor, so that would mean the flywheel is an issue. I had checked that before, but it wasn't broken or deformed, so it wasn't obvious. Luckily, the old engine wasn't thrown away yet, so I compared both flywheels.The used flywheel had two teeth filled up to indicate TDC, but the orignal one had two teeth open to indicate TDC. A small but fundamental difference. You wouldn't expect that right away with two seemingly identical engines. Both had it at 90BTDC(also very important) and they were interchangable regarding everything but these teeth.

Once again, it shows how important it is to throw stuff away only after the entire job is done.

I know nothing about volvo, and I'm not a professional mechanic, so... take my thoughts with a grain of salt :).

I would have thought for sure that the cam and/or crank sensor would be the culprit. I guess you could give the MAP sensor a shot? If the ECU detects an open circuit to the map sensor maybe it'll give up completely. In speed density, manifold pressure is critical.

Not the answer you're looking for? Browse other questions tagged engine troubleshooting ignition ecu fuel-injection or ask your own question.