Does anyone have a brake line diagram for a 2000 Monte Carlo SS?

The left rear brake line on our 00 MC rusted through and caused a loss of brake fluid and stopping power. Luckily, the car wasn't far from the house when it happened so my son was able to limp home.

I ordered a complete brake line set and am now removing all of the brake lines to replace them.

The previous owner of the car had told me he'd had one of the brake lines replaced before so I'm wondering if his mechanic didn't put things together correctly.

See the attached drawing. I'm assuming that 1/2 are on one channel and 3/4 are on the other on the ABS master cylinder.

The way this is set up, a loss of brake fluid loss on the left rear would cause a loss of braking power on the left side of the car so braking would pull the car to one side. Or am I my misunderstanding in that in the case of an ABS system it doesn't matter because the ABS will compensate for any situation?

Does anybody have a brake line diagram for a 2000 Monte Carlo SS starting from the ABS master cylinder? 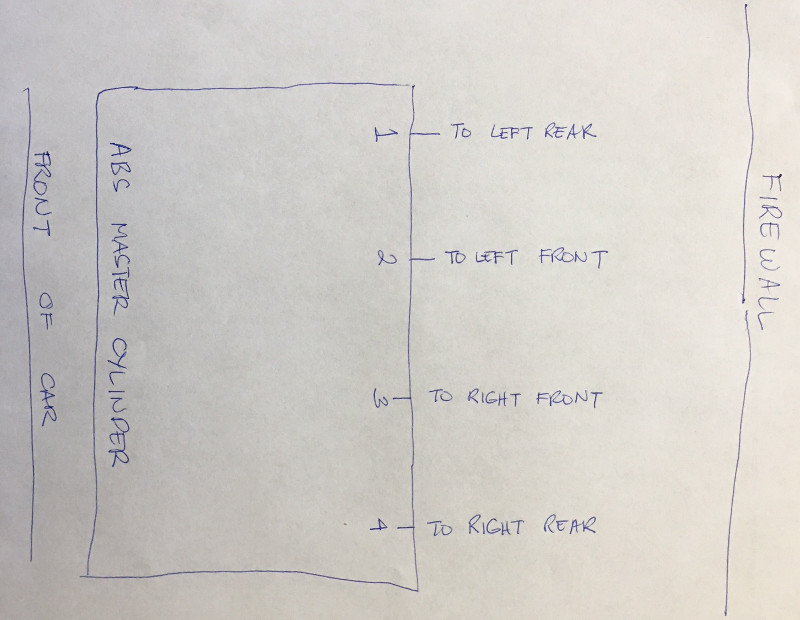 Ben, thank you! Your identification of the Delphi DBC 7 BPMV as the model of the ABS master cylinder did the trick. I found this [article][1]

[1]: https://www.aa1car.com/library/abs_delphi_dbc7.htm that has a diagram and it appears that the original setup on my 00 MC is correct.

Again, thanks. I wouldn't have found the info I needed without you.

Not the answer you're looking for? Browse other questions tagged brakes chevrolet abs replacements monte-carlo or ask your own question.

7
Brakes go to the floor
21
What are these loops in the brake line for?
4
2003 chchevorlet S-10 pickup truck
2
Is it okay for master cylinder to be crooked (leaning to left) on aftermarket power brake booster?
1
Brake always need to be bled
0
Can spongy brakes lead to skidding?
1
1969 Toyota Land Cruiser brake bleeding order
0
Does a diameter of a brake line affect braking pressure