My Mercedes CLK230 (1997, 4 cylinder) has the following issue: when I depress the accelerator pedal, (almost) nothing happens until a certain angle (not too much but clearly noticeable), and after I push it some more, acceleration continues almost normally. When decelerating to stop (traffic light), motor rotational speed drops to almost zero (motor almost turns off) and then regains speed to normal 600-700 rmp.

OBD readings show an error (P0170 Fuel Trim Bank 1) which indicates problems with fuel control. At idle (warm motor) STFT and LTFT are both at -25% which explains the lack of power. O2 Sensor stays around 0.9 Volts, indicating rich mixture despite the already relatively low fuel injection. When I open the throttle manually during measurement and let it return to idle, "FUELSYS1" shows "OL-Drive" temporarily (4th picture). Edit: Mass flow sensor does react to throttle manipulation (so at least it's not completely blown). Opening the air filter housing doesn't do anything (I thought maybe the air filter is clogged). 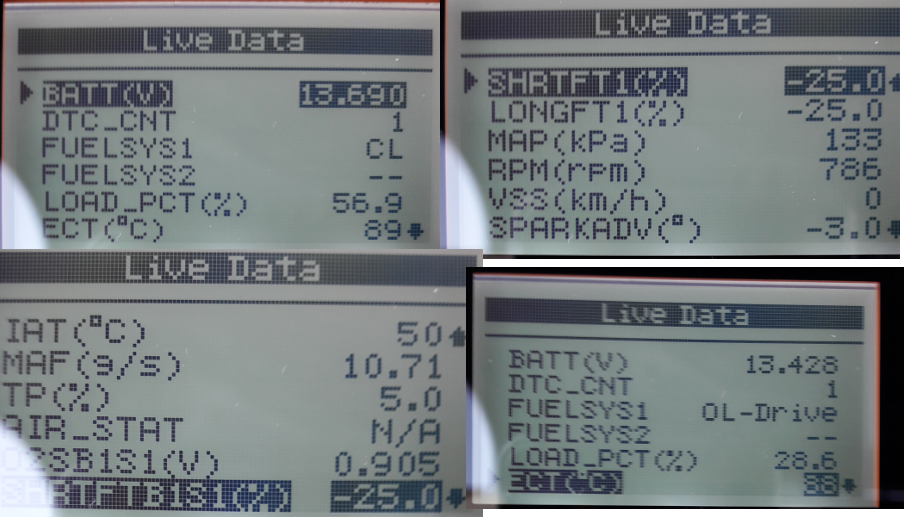 Since I have noticed decreased fuel consumption (~10% less), I think that the negative fuel injection readings are indeed correct (so probably no blocked injection valves, nor a weak fuel pump/blocked filter, which would cause the motor controller to up-regulate fuel injection timings anyway).

So either the motor gets too little air or it thinks it gets too little air. Possible reasons for the latter: damaged O2 sensor (unlikely because the voltage is electrochemical, so it's either correct or completely zero) or damaged mass air flow sensor. Or could it be that the idle air flow is blocked while at wider throttle everything is okay?

Is that argumentation correct? What is the most likely cause? I have changed the MAF sensor only last year. I can't believe that it's damaged again. After all this is a very simple part, just a temperature sensor and a heater.

Edit (23 June, 2018): It wasn't the O2 sensor. After replacing it, all the symptoms (including the measurement values over OBD) were exactly the same, so it seems like the O2 sensor is and was okay.

Then I opened the MAF sensor tube and noticed that it was almost literally drenched in oil (the fresh, fluent variety). I wiped everything away and put it back in again. Now it is a lot better: where the MAF readings formerly showed values above ~11 g/s, it is now below ~7 g/s. And the engine just hits the ~600 rpm mark when I stop at a traffic light, instead of approaching ~0 rpm. So the car is back to usable. Don't anybody ask me why the MAF was reporting too much air flow when it was dirty, because normally dirt causes thermal insulation and should result in the sensor reporting less cooling by the air flow.

However it is not perfect. There is still a lot of power lacking near idle rpm. And the fuel trim readings are still around -25% with the O2 sensor readings stuck at ~0.9V at idle. I guess with the dirty MAF the mixture was formerly way too rich and now it is only slightly beyond the control limit.

Edit (25 June, 2018): it was definitely the MAF sensor. After replacing it by a new one, the mass air flow now shows only ~3g/s where it has been ~11 g/s with the defective MAF. Fuel trim values are now back around ~0% and the O2 sensor is able to oscillate in the range 0.2V - 0.8V. It took the engine control several minutes until it had recalibrated itself.

I bought an original MAF sensor from Mercedes (480€ instead of 36€ for the one from Ebay). Hope the elevated price tag corresponds to a reasonable life time. If not, I'll just buy one from Ebay every year or so, and still be cheaper than one Mercedes part after ten years... ;-)

My guess would be your MAF sensor. Try unplugging it, and see if the problem persists.

I had a similar problem (briefly no reaction when pressing throttle, RPM's would drop below idle speed, the rising and falling of RPM's as they "hunt") on my 1992 Ford Ranger. Yes, it is a completely different car, but looking at the MAF sensors for your Merc on Rock Auto, I remember most of the brands (Delphi, Bosch, Spectra, Cardone, etc) also made MAF sensors for my Ranger, and the prices are very similar. Thus, I am assuming that the quality (or lack thereof) of your replacement MAF sensor may be very similar to that of my MAF sensor.

The problem I mentioned in my Ranger happened on-and-off for a couple years, and I eventually replaced the MAF sensor around a year and a half ago. After replacing it, the problem stopped entirely. However, a couple months back, it started happening again, so I just went ahead and have left the MAF sensor unplugged since then.

Even if unplugging the MAF sensor does not fix your problem, it will rule out one of your hypotheses...

If the data for the MAP is correct, than actually it "thinks" it is getting too much air and not too little. The only way to reach 133 kpa, is boost, and at 786 RPM idle, I'm sure there isn't any.

Typical MAP at sea level is around 100 kpa with the key on and engine off. During a steady idle, 28-37 kpa. If for some reason you do not actually have a MAP sensor, than I would suspect the MAF is over reporting air flow as mentioned in the previous answer, and the MAP data would be inaccurate for some reason.

I would also be surprised to find just about any aftermarket MAF sensor not cause trouble within a year. But that is strictly an my opinion based on experience.

4
97 altima 5spd sputters, has loss of power under 3500rpm, dies when clutch is disengaged
10
What can cause slow oxygen sensor readings?
7
2008 Chrysler Crossfire - Check Engine Light
5
Possible clogged injectors?
3
P0172 System Too Rich, while fuel consumption is too low
4
Toyota Vitz 2007: Can a vacuum leak lead to PO171
0
High rpm on neutral but flatting the gas pedal on D doesn't increase the rpm
4
Calculating fuel flow rate through obd || sensor not supporting 015E and 0110 commands
1
Mapping VW DTCs from a scantool to the raw data obtained