Water leak in 2002 Honda Accord

I have an 02 Accord EX with sunroof that has developed a weird leak that saturates the floor on the front passenger side when the car is left sitting in heavy rain.

What is weird about this leak is that the water seems to be coming up from underneath the carpet. It is not entering the car via the sun roof or the door as the seat and carpet on the side remain dry. (I have previously experienced blocked drain holes in the sun roof - but that spills water into the passenger seat and leaves a noticeable puddle on the seat).

I have attached a picture of the situation and I have circled where the dampness seems to start from.

Any ideas on what is causing this? 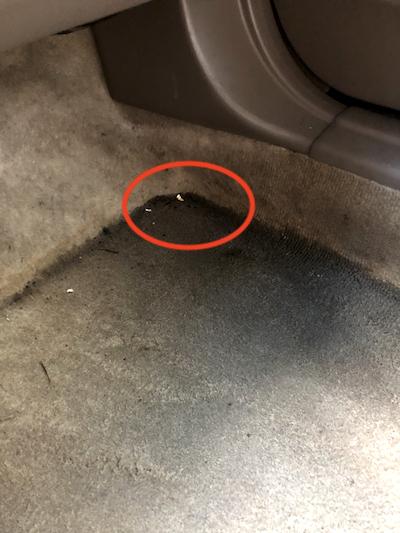 Chris's answer that it is a problem with the sunroof drain pipe matches with what my mechanic recently said (and Chris beat me to answering my own question).

My mechanic also stated that it was not economically viable to replace that drain pipe given how much interior etc would have to be removed to in order to access it. I don't know if this is BS or not.

(minor rant) My mechanic's solution to the problem was to permanently block the drain pipe so that it doesn't leak water under the carpet. Given that my driveway slopes slightly to the right, this means that water now pools in the sunroof on that side and spills over the lip of the sunroof and pours onto the passenger front seat - resulting in the same problem. I found this solution of theirs to be spectacularly stupid and I have some choice words selected to say to them but I am holding back on that right now (end rant)

I was already planning on replacing this car in 2019 anyway, so I am taking deep breathes and letting this issue go.

The sunroof hose may be clogged. The escape for the hose is very near the floorboards.

Not the answer you're looking for? Browse other questions tagged honda accord water-leak or ask your own question.

1
Water leak in roof of 2007 honda pilot
3
Ford Ka - Passenger footwell water leak
5
Water underneath floor carpet - Mazda Protégé 2002
5
Audi Q3 wet passenger footwell
1
Ford ka Mk1 (2008) drivers side footwell leak
2
VW Passat leak. Where is it coming from?
1
2011 Infiniti G25x: water is leaking down from the passenger glove compartment onto the floor
0
2002 Honda Civic EX: How is water getting into my trunk?
4
Wet passenger floor in parked Mercury Milan after a rain