Can I damage motorcycle's geometry with too tight straps?

The motorcycle was tied with ratchet straps in the front by the fork from both sides and in the rear by the swing arm from both sides (shown in red marks on the image below). The problem is that straps were pulling sideways very strongly, for as much as the human force on the strap ratchet allowed to tighten up the strap, and it remained like that for the entire 10-hour trip. Is it possible that I damaged motorcycle's geometry during the transportation with these tightly tied straps? 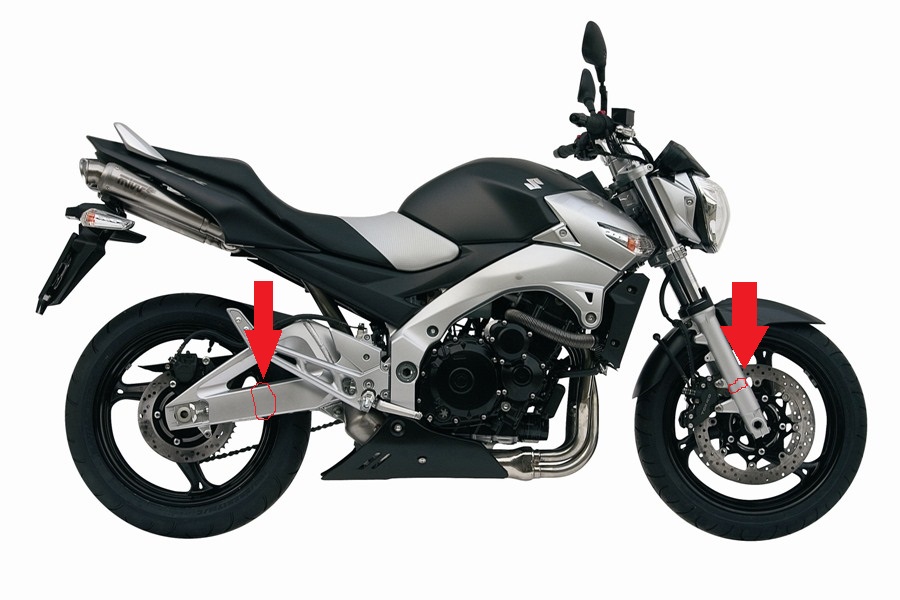 Its unlikely, although not impossible. Bending the rear swingarm is highly unlikely as is changing its setup, as the swingarm and wheel bearings are not usually adjustable. Any damged or broken bearings would be noticed rather quickly. Rear shock settings are adjustable but wouldn't be affected unless you really knocked the swingarm sideways, as in a high impact crash.

The forks if anything would be my main concern, make sure they operate properly and any adjustment mechanisms still work. Also, just keep an eye on the top seals for any signs of leakage. If anything appears, get the forks checked out.

Many, many race bikes are transported in vans in a similar way. I assume in this case the straps were pulling sidways. In future I would advise that the bike is strapped up higher, perhaps around the handlebars, upper chassis or top fork yolks at the the front, and either the rear hand bar, foot rest mounts or seat frame rails at the rear. Having the straps this way (higher up the bike) also supports the bike better. If the straps are lower down the bike it could still fall over being top heavy, that is unless the wheels were strapped down also. Which is a good idea.

8
Can a motorcycle's brake lever be bent back into shape?
4
How can I check if my motorcycle's suspension is working correctly?
7
Should you stop a motorcycle's engine with the side stand?
13
Can I drive with a broken/without the spider spring in my clutch?
3
Does starting the engine with one of the spark plug wire disconnected damage the starter coil?
1
How can I detect bearing damage caused by oil?
0
Can push starting a motorcycle cause damage to the piston rings?
1
Can a engine that calls for 10w30 oil, run with 5w40 oil without any problems?