I'm hoping that someone can give me a more specific description of where/how to look for this oil leak (I'm really just not seeing it, and the oil consumption doesn't seem more than normal) and tell me if the quote is reasonable in urgency and price. This repair is something that I do not have the knowledge, skills, or tools to perform myself, if you couldn't tell by my needing to know where to look for the issue.

From your description, you definitely have one, and maybe two, problems.

The easy one is the valve cover gaskets (the 'cam case'? Never heard it called that on a Subaru).

There are two valve covers on a Subaru engine - one on each side of the engine, with the spark plug wires going into them (part 18 on this diagram). The valve cover has three gaskets on each side (parts 19 and 20). These leak over time, because the rubber seals get hard. To check for a leak, look for oil on the valve cover seams; the leak follows gravity, so you'll see the oil on the seam towards the back of the engine. It's more of a problem with Subaru engines due to the 'boxer' nature of the engine; most cars have the cam covers at the top, and oil is only present when the engine is running. On a Subaru, these covers can have oil sitting on them when the engine is parked.

To fix the valve cover gaskets, you remove the bolts on each cam cover, pull the cover off, put the new gasket in place, and bolt everything back up to torque. It's less than an hour each side. Parts cost is about four hamburgers at the local store.

The other potential leak problem is the camshaft seal. These leak oil from the front of the camshaft, and it ends up behind the front cover of the engine. Look at the black plastic covers at the very front (parts 3, 4, 5, 8 and 9) - you'll see oil along the seam. Your car has four camshaft seals, because it's a DOHC engine. They are listed as part 15 on the diagram. The part is cheap - cost about the same as the fries that go with your hamburger - but to replace them you need to remove the front covers, the timing chain, tensioners... lots of work. It takes a mechanic about 6 hours to change the camshaft seals.

I believe your car has a timing chain, and not a timing belt. If it's a chain, you can do the remove/replace with the existing chain. If it's a belt, it should have been changed at 105,000 miles as part of regular maintenance; if not, changing camshaft seals adds only about 30 minutes to a timing belt replacement on the Subaru.

I'd recommend looking for a non-dealership Subaru specialist. Don't use a normal shop - Subarus have some odd quirks - but a shop that works on a lot of Subarus can be much more cost effective for this work. And you never know - they may tell you that you can live with the leaks for a few months while you save up for the repair. 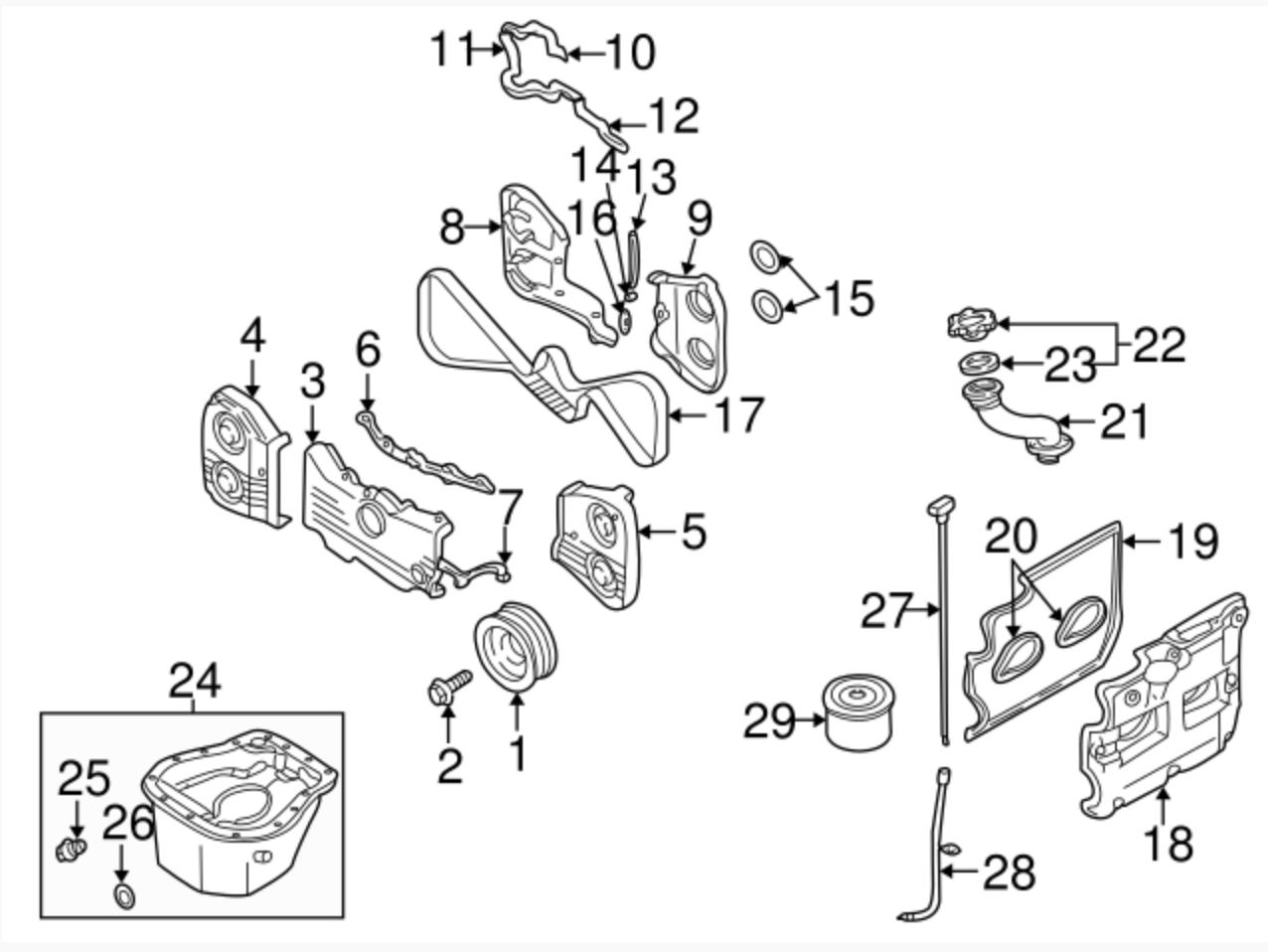 It's a good idea to get a second opinion on this, that's a lot of money to spend. It may be a very high price for the work, repairpal says a front seal replacement for your car should be about $250 all in. Don't know how accurate that is but $2400 for replacing a couple of oil seals sounds pretty steep to me. The seals themselves should come out to less than $150, that means they want $2250 in labor costs, the only way that would be remotely reasonable is if they had to remove the engine to do it, even then that seems overpriced.

Subaru's oil seepage diagnosis procedure may help you if you really want to dig into this, but if all you want to do is confirm there's a leak somewhere then that's doable with a decent flashlight and a few minutes of time with the mk 1 eyeball.

If your engine is leaking oil then you'd almost certainly have oil on the underside of the engine, that's where I'd start. If you have a high curb around you can drive up on it, that will give the car some ground clearance for you to get a good look (make sure to have the emergency brake applied as well for safety. Also let the engine cool some so you don't burn yourself if you touch it!). Bring a flashlight with you and have a good look around. It may not be dripping onto the ground, but if your engine has a really greasy bottom then you've got a leak somewhere. If it's clean then I'd find it hard to believe there's a leak, but you should have a look from the top as well.

Pop the hood and remove the engine cover if there is one. It may just lift off or you may need to remove a couple of screws. IIRC Subaru engines are all horizontally opposed dual cam engines, so there will be 2 cam covers, one on the left and one on the right side of the engine. Use your flash to look at where the covers meet the engine, see if there's leaks. If you have leaks then you probably need some work done, but go to an independent shop for an alternative quote.

There's a known issue with Subarus (we had a 2012 with the issue). It's not a recall that I know of at this time... although, it should be. There's a flaw in the way that the cam carrier cover and timing belt cover were sealed. RTV was used and, it ends up leaking on many vehicles. They took care of ours under the warranty.