Want to improve this question? Add details and clarify the problem by editing this post.

I have owned this car twenty one years, it ran perfect. 133,000 miles. LT-1 V-8 which I thought was bulletproof, what happened? I need to get second opinion for sure. What can I do?

If it quit running and/or won't start, it's more than likely the Optispark (the LT1 distributor) which is bad (ie: cranks but won't start ... never had an issue before). If you've never replaced it (or haven't for quite some time) this is most likely the issue. The 93-95 Optispark I is (from the factory) non-vented. It gets ozone build up on the inside which causes issues with the optical reader over time.

The Optispark can fail without warning, though can fail quite readily if the water pump goes out (it sits right over the Optispark). When the Optispark dies, the engine just quits or it will crank over but won't start. Everything else will be exactly as it's supposed to be, yet there you go (or actually don't go, because the car isn't running!).

It may not always be the Optispark which is at fault, so before you go straight to changing it out (or having it changed out), there's a list of things you should check first. I found this forum post which describes what you need to do very well:

Check to see if you have a signal from the PCM to the ICM on the white wire. While someone cranks it over, check the white wire to ground for 1-4 volts on the AC scale. If that's there, the problem is between the ICM and the coil.

2 of the wires go from the ICM to the coil. With key ON engine OFF, those 2 wires have 12 volts on them. Find them and be sure they have 12 volts with the key on. One of the other 2 wires left goes to ground. Find it and confirm it goes to ground. The last wire left is the one that carries the control signal. It will test out as I said on the AC scale when someone cranks it with 1 to 4 volts AC. Also measure the resistance of the wires on the opti harness.

If you are getting 1-4 VAC on the white wire it means your opti is sending pulses to the PCM which is sending signals to the ICM to fire. Then your problem is not the PCM or harness. It would be ahead of that which leaves the ICM, coil, and opti. 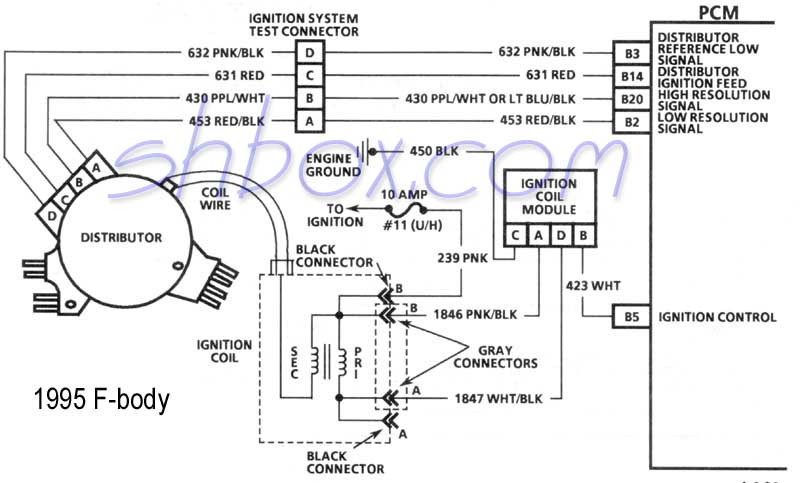 Disconnect the ICM connector. Leave the coil connected. Turn key ON engine OFF. Check for dc voltage at harness terminal "A" to ground and and also "D" to ground. You should get 10v dc or more on both terminals.

If you get no voltage then its the coil or ignition fuse.

If you have good voltage, switch the meter to AC and connect the leads to terminal "B" and ground. Watch the metre while someone cranks the engine. You should see between 1 and 4 VAC. If you don't see the proper ac voltage the problem could be the optispark, the harness to the optispark, the PCM or any of the wiring in between.

So then if your car passes all the above tests, its the opti.

Also, there's this video which tells you all about the Optispark system.

If it does turn out to be the Optispark, this is a situation far from being a dead engine. There is most likely hope for your vehicle.

Not the answer you're looking for? Browse other questions tagged engine chevrolet camaro or ask your own question.