So I've done some mild Googling, and came across This Great Post.

Deep in there is this gem:

THROTTLE BODY SPACER While not a new concept in N/A performance enhancement, suppliers for this part for the EJ25 seem to be just one. Area1320 sells a EJ25 TB spacer and has dynos on their site showing around 4hp gain. However most users have reported a significant gain in fuel mileage. Somewhere in the neighborhood of 4 mpg. At $150 this could pay for itself quickly. One caveat is that supplies seem to be pretty limited as the shop makes these on a part time basis. It is not their primary business.

With that list of goals, does anyone feel that a Throttle Body Spacer will provide anything towards the list, even if we're only talking about "Butt Dyno" effect here? Anything more than Placebo would be fine. Anyone out there with experience of modding on the N/A EJ platform?

I have only ever had one normally aspirated Subaru, and didn't mod it much, but from the mods I have had on various turbocharged Subarus over the years on some Imprezas, WRXs and my sorely missed Litchfield Forester STi, I wouldn't suggest bothering with this.

My preferred route with mods (backed up by Subaru specialists and modders) is:

ECU upgrades at every step, but you expect that anyway, and any weight reduction you can do is obviously a benefit .

I discovered this seemingly scientific experiment performed by user wiliaty on the DI Rally Forums on the effects of a Throttle Body Spacer on a 2005 Impreza 2.5RS. This post is mostly just a regurgitation of that experiment.

After some googling it does appear that the 2005 2.5RS does run an EJ253. It is not clear whether the 2005 and 2007 EJ253 are similar within tolerable error rates. It does appear that there might have been an increase in plenum volume after 2005 based on this post at NASIOC on Manifold Testing but that needs more sources. For the scope of this query, this is the closest experiment I could find, and thus it's findings can be loosely utilized as a baseline in deciding if any effect is had.

The experiment presents us with two charts of interest: 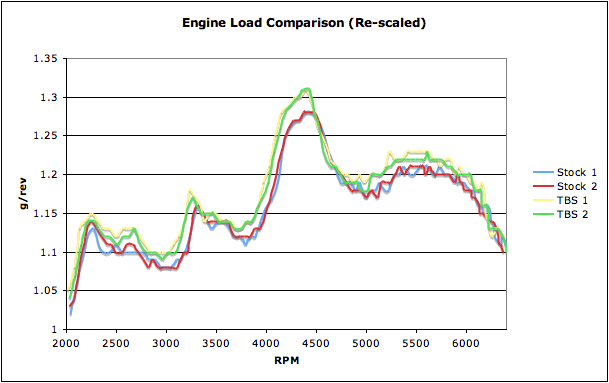 The second Chart of Interest shows In Gear Acceleration. This bar-chart uses data from the same set of 4 runs: 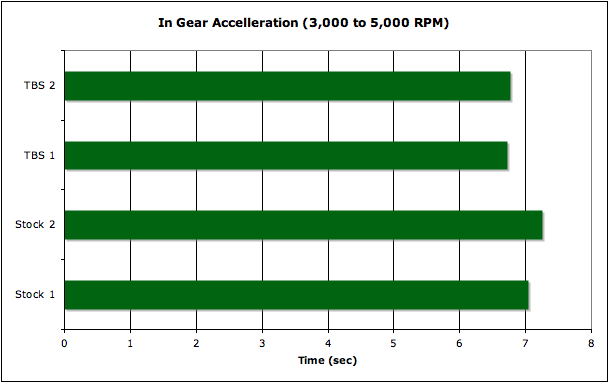 The experiment presents this conclusion/Summary which I've summarized below for easier digestibility:

Summary: There was no measurable difference in AFR. With instrumentation and computer data-logging, I was able to measure a difference between stock and TBS even though I was unable to feel one. Stock has a peak engine load of 1.28g/rev. TBS had a peak of 1.31g/rev. This represents an increase in airflow of 2.3% with the TBS installed. Across the entire rev range, the TBS flows more air than stock, though mostly at much less than the 2.3% peak gain. In-gear acceleration from 3,000 RPM to 5,000 RPM was additionally calculated. It took longer to accelerate stock than it did with the TBS by an average of 4 tenths of a second (5.6%).

While this was only one experiment, with a small number of runs made with questionably accurate data logging, it stands as a base to explain whether or not the platform can benefit from the larger plenum volume provided by a TBS.

Not the answer you're looking for? Browse other questions tagged subaru performance modification or ask your own question.

5
What is a good strategy for adding performance upgrades in phases to a 2013 Mazda 3?
7
Assuming identical and sufficient ABS, and ignoring aerodynamics, are tires the only factor for braking distance?
5
I lubed a sticky throttle and now it's worse, but only in the cold
9
How can I secure the power block for my LED headlights?
11
Why is oil on my throttle body hose?
5
Why isn't the Pikes Peak Hill Climb used as a benchmark for automotive companies?
3
What is the difference between Stage 1 & Stage 2 Performance chips for an '89 S10 Blazer?
1
I saw a car with engine running for air conditioner, while the owner was absent. Was that car modified? (Is this a common modification?)
0
Performance brakes on the front axle only. Bad idea?