Why do EVs with a single speed gearbox still require a gear box at all?

A Tesla Model S for example has a single speed gearbox in between the motor and the rear axle of the wheels. What's the purpose of that gear? Why can't the motor be mated directly with the axle instead?

With internal combustion engines I understand that a multi speed gearbox is required because a combustion engine can't deliver maximum torque from standstill nor for long in its RPM range, but since EVs can, what type of performance does a single speed gearbox enhance (more torque, speed, energy efficiency or something else)?

Tesla's motors have peak power in the 5-10k rpm neighborhood. They need to gear it down so that the power is utilized at wheel speeds in the 1-2krpm neighborhood. (extremely round numbers folks..)

It may just be for packaging reasons. I could not quickly find the gearing, but it likely doesn't matter much. Taking a look at the photo here shows the motor set back on the subframe, it looks like this allows the half-shafts a straighter shot to the differential, and then to the motor. 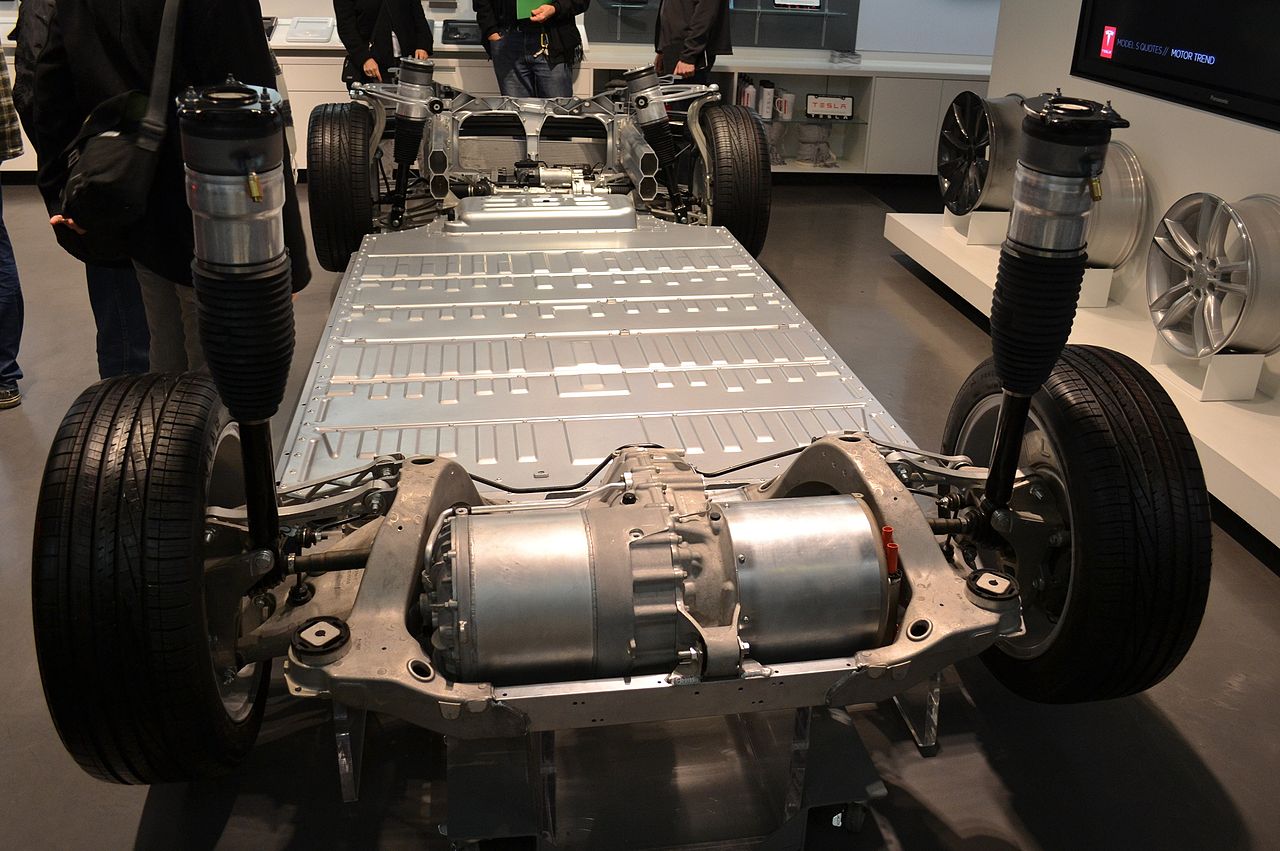 The reason is simple.

To have lots of power in a small motor package, you want high RPMs. The size of the motor dictates the torque. To have lots of power, you can either increase torque (thus increasing motor size and therefore things like costs of rare earth materials in magnets if the motor is a permanent magnet motor) or increase RPMs (which is essentially free). Based on this, it should be clear the way manufacturers have maximized power is maximizing RPMs. Gearboxes then convert the high RPMs to lower RPMs and higher torques.

However, wheel with a circumference of 2 meters or so will require 1000 RPM to reach 120 km/h. That's about as fast as most people go in their cars. Electric motors can turn at over ten times this speed.

The motor-generator 1 (MG1) in my 2016 Toyota RAV4 hybrid produces its peak power at 12500 RPM (source)! Much higher than typical internal combustion engines.

The same problem makes electric bicycles fundamentally difficult to build. The cyclist pedals at very low RPMs, the wheel rotates at slightly higher RPMs but electric motors want to spin at much, much higher RPMs. Most manufacturers have put the motor in the wheel hub because RPMs are higher there than at the crank spindle. But this is still suboptimal. Far more optimal would be to change the gearing to favor high RPMs at the crank spindle, and remove the cranks and pedals, replacing them entirely with the electric motor. But without cranks and pedals it wouldn't be an electric bicycle then. There is fundamental incompatibility between the gearing required for pedaling, and the gearing required for electric motors. About the only reason why these hub motors work is that they typically are limited due to legislation to 250 watts max.

The same reason also means washing machines typically aren't direct drive but rather belt drive. The belt drive allows high RPMs at the motor. Some manufacturers make these direct drive machines (e.g. LG), but there is no good reason for their existence apart from marketing reasons.

Not the answer you're looking for? Browse other questions tagged transmission tesla or ask your own question.

3
Why bikes with gears are preferred when there is gearless(or automatic gear) technology?
8
Gear selection on 6 speed box
15
Why do 5 and 6-speed transmissions typically need different gear ratios?
4
Why after a certain RPM with the same gear selected the car no longer accelerates?
5
Why couldn't I shift into 1st gear with car not stopped in my Renault, but my Volvo lets me do it?
0
Why are high performance electric cars promoted as requiring no gearbox?
2
Why would my car not roll freely in gear with the clutch in?
0
Could gearbox be damaged by pushing gear lever too hard with broken clutch?