I drove about 5 miles today and right when I stopped at home (luckily), my car started steaming and coolant had pooled on my driveway. A decent amount had leaked, but I still have plenty in the reservoir.

I tried turning the car back on about 30 minutes later and now I see some bubbles coming from the top of the radiator (refer to picture below), but it isn't steaming anymore or anything. Perhaps because it isn't hot enough yet?

I can't see a crack and Im not sure how I would find it without taking everything out. Can I pour in some type of radiator sealant like K-Seal and call it fixed or should I try something else? This car has about 160k miles on it (which I know is not the end of its life), but I don't want to spend a lot of money if something else will do the trick.

Also, this may have nothing to do with it, but on my way to work this morning it seemed like the heat never got warm. I only work 5 miles away from home, so it is possible it just didnt get to that point yet, but normally by mile 4 it is warm. - Just thought I would mention that. 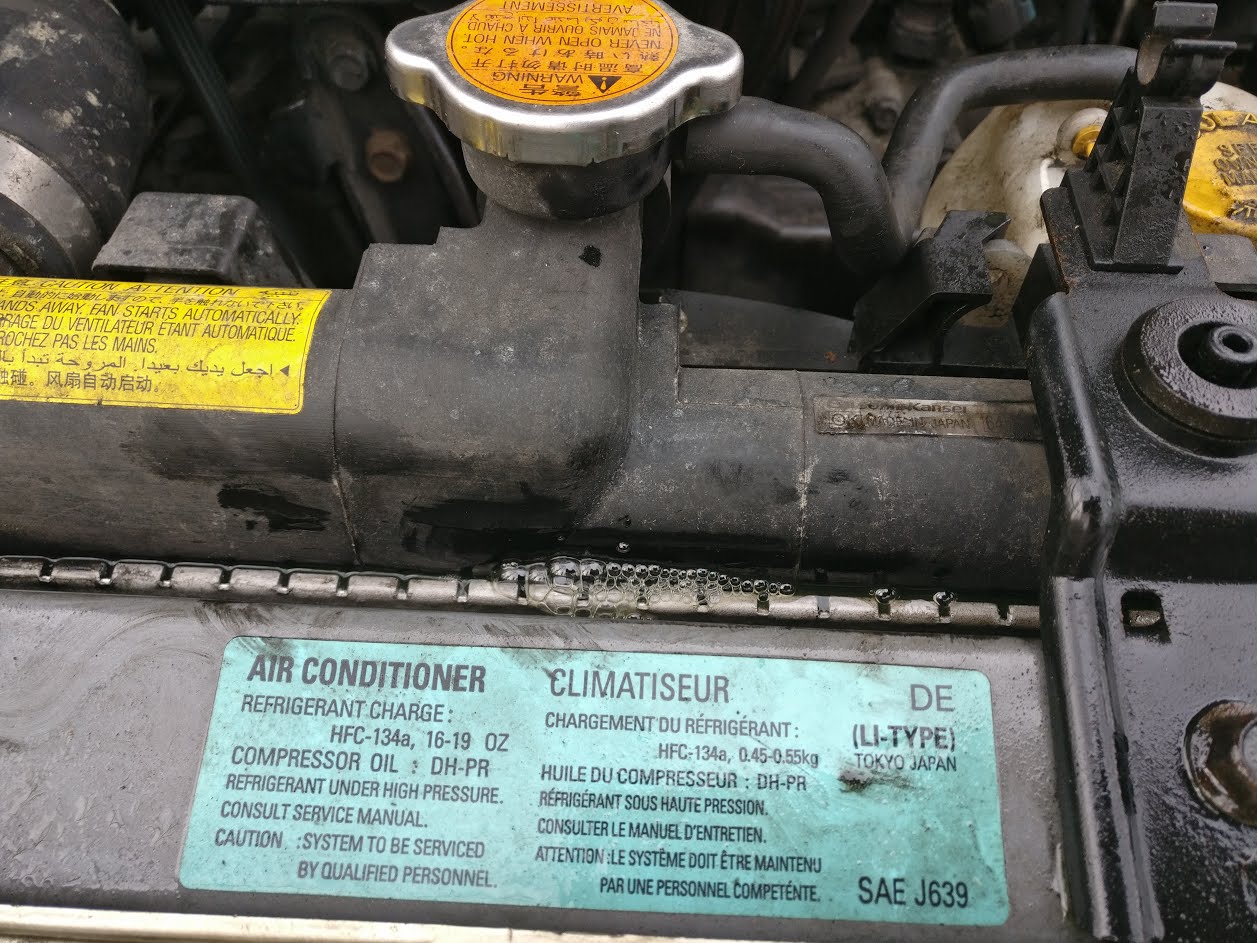 One possible explanation for the circumstances you have described is that at the beginning, the thermostat in the cooling system stuck in the closed position. This would cause an overheat situation, forcing coolant into the overflow bottle. It's certainly possible that your pressure cap opened enough to spray, especially if it's advanced in years (old).

You've not referenced the level of coolant in the radiator (but you should check it with the engine cold) but I suspect it's low.

The second phase of your description, no heat in the cabin, implies that the thermostat is now stuck in the open position. The engine will use more fuel and will not warm up well enough to inform the computer and other systems to stop enriching the mixture.

I would suggest that pouring anything into the radiator is not a good idea, especially if you do not detect a leak. If the vehicle will not warm up when driving, run the engine while stationary, to reduce the amount of cooling provided while driving.

If you have mechanical skills, consider to change the thermostat. They are not particularly expensive. A quick check via The Google shows multiple videos for replacing thermostats. Many of them are in the three minute range, which implies that it is not particularly difficult, although the creators could be editing out the boring stuff.

I think it's not the thermostat.

From the bubbles I see, it appears the crimp seal between the aluminum core and the plastic top header has failed. This is not an uncommon problem, especially at the 160K mark.

Unfortunately, there is no good way to "fix" this other than replacing the radiator. In pure "shadetree I'm broke" desperation I admit I have attempted to gently hammer down the metal fingers above the section of plastic that is leaking. This sometimes works for a short while, and sometimes not at all. I wouldn't suggest you repeating my folly. The plastic is aged and distorted, and it's not a servicable item - despite my "ingenuity"...

I would avaoid any kind of "sealant", as this can cause cooling efficiency problems and heater core plugging.

Back in the day we used "Bars Leak", goop, pepper and eggs, and all sorts of muck with limited success. No more. Radiators have much closer flow paths, and this simply isn't advisable.

I would also check the radiator coolant level under the cap (when cool). It should be right up to the neck. The amount in the reservoir is not a good indication of the amount in the radiator. You may have lost enough coolant to cause air in the system resulting the odd warming symptoms you describe. Keep in mind this has probably been going on for a lot of time prior to when you noticed it. What escaped many times before as small amounts of "steam" is now missing from the cooling system.

I suggest you replace the radiator and bleed the air out of the system (including the heater core) properly.

Not the answer you're looking for? Browse other questions tagged radiator coolant-leak or ask your own question.