Last week we bought a used car (BMW X5 E53 3.0L Diesel) from a private person. It looked fine and there seemed to be no major issue, only the regularly oil service was due.

On our way home the 4x4 warn light went on. Despite of that we recognized following issues in the next days:

Apart from this the car drives fine. It switches gears smoothly and other electric systems seem to work.

Our favorite car mechanic go through the error logs but couldn't find something specific. He told us to go to a BMW service and let it be tested there. This was BMW's log: (if necessary I could try to translate it, just tell me.) 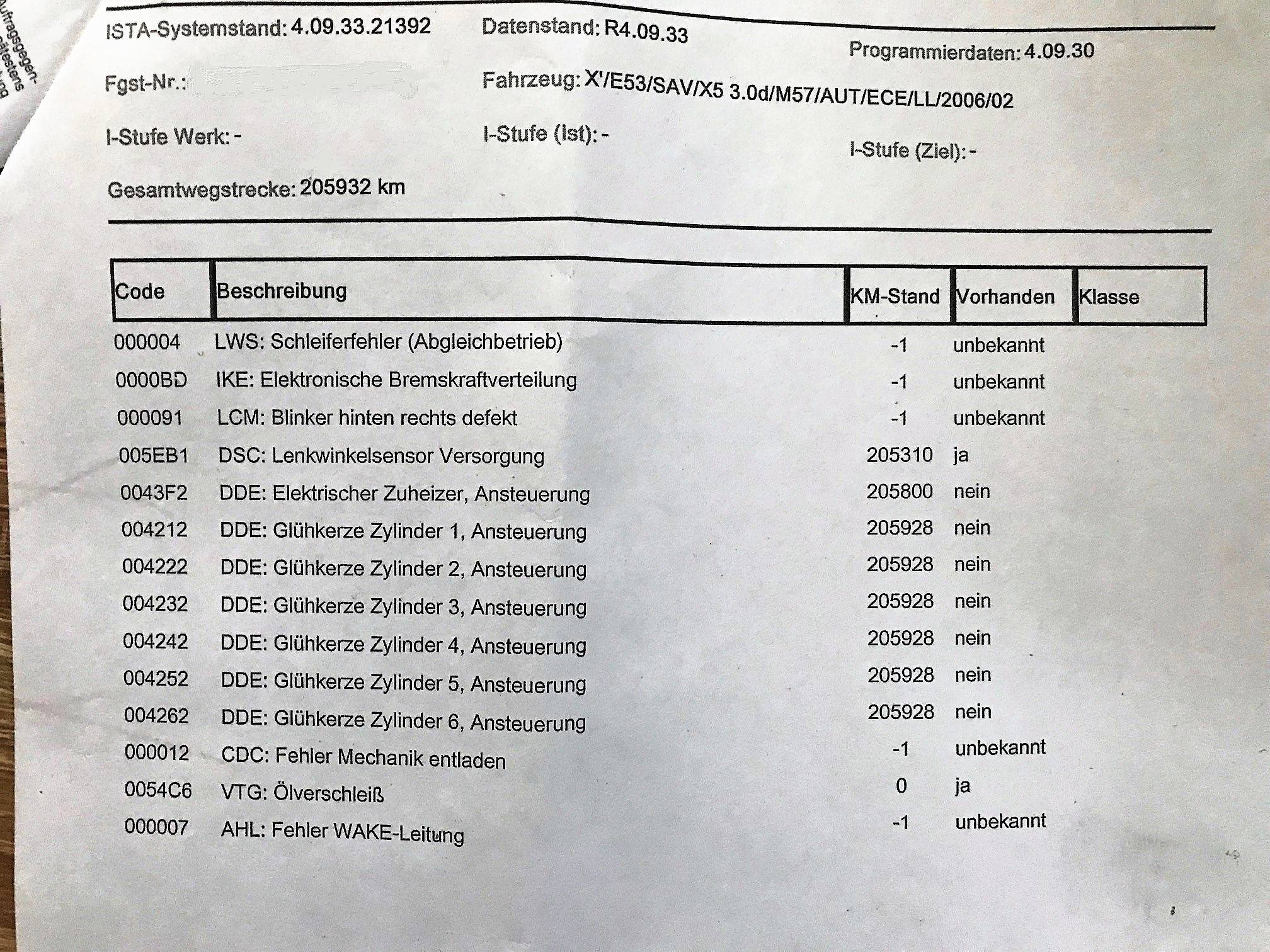 Questions: Which components could be causing all of this? We'd like to change them ordered by probability of being the root cause and lowest repair cost first (as this might be less expensive as a lawyer suing the seller of the car, as we probably lose the case).

Is it dangerous to drive the car in this state?

It is such a beautiful car with which we felt blindly in love but we cannot afford some thousands of euros just to find the error cause. We had learned our lesson on the hard way. I hope my request was understandable and fits the requirements of this site.

Update: this morning I started the car. Then I switched gear on 'D' (driving mode) and the engine died and the red warn lights for battery and oil went on. I restarted it and it worked fine, despite of the bordcomputer (and radio) which stays black for almost the whole drive (30min). Some minutes before the arrival it went on and the radio started working. May this be because of temperature outside (~ -5°C)?

Update 2: We drove the car to our mechanic yesterday, he'll do both oil changes and will look if he can find any error causes. He won't do the electrics though. We will return to BMW service for that. Therefore could you might give me some advice where they'll have to look at first, so that they won't waste to much of their time and our money? I observed, the bordcomputer seems only to stay black after the pre-heater was on before. About 10-20min after pre-heater stops, the bordcomputer display will work again. Why would it overheat?

Update 3: Our favorite mechanic changed both oil changes and 'taught' (anlernen) the steering angle sensor and the 4x4 error disappeared for a short time. After engine restart, it was on again. Today first start and gear switch to 'D' engine again failed, but now just the battery light went on. We well let our 'track be set' (Spur einstellen). If this doesn't help, we'll get a new sensor. Anyway, he told us that the battery is dying which might have cause the electric issues. (BMW service told us the battery was okay, so we didn't thought about that anymore.) I ordered a new one. I'll update the results a soon as we changed it. Thank you all for helping. <3

Update 4: We changed the battery and now all electric issues seem to be gone. Also we changed the steering angle sensor and let it be initialized by official BMW service (although a different branch) and until now, the 4x4 warn light disappeared. Tomorrow, we'll let the track be set and the thermostat of cooling water (?) be replaced and then we are done for now. There is still the issue marked in the error log about the glow plugs. Our mechanic told us they influence the start up of the car and as long as it starts we might delay it as a repair would cost about 1000€ which is to much for us now, as we have to buy new tires until Easter. My personal resume from this is: if it looks too good to be true, it's probably not true.

The rest of the errors and symptoms indicate some fault onto the electrical system (distortion onto the bus or noise/other problems on the power supply). If you are really lucky there is only a easily spotted faulty cabling or old battery, but you definitely need the assistance of an competent vehicle electrician.

Competent means: Not one of those that blindly replace parts until the problem disappears.

Update: Perhaps you want to go to some competent, independent vehicle electrician first? The dealerships have often the tendency to prefer replacing just entire part groups as it still solves the problem somehow, it does not require much experience and improves cash-flow. Should they replace the entire involved electronics incl. wiring harness it would be financial overkill

Here are my observations (kudos to Myself for providing translations):

Not the answer you're looking for? Browse other questions tagged bmw warning-light awd transfer-case x5 or ask your own question.