Is it normal for the wheels to be over 100C hot after a few kilometers of driving?

I drove my car from my parking to a spot where I can wash my car 3.5 km away. I thought it might be a good idea to clean the rims, so I splashed water towards the front wheel. To my surprise, steam was coming out from somewhere inside the wheel! I thought it might be the brake pad, but I am not sure.

Is it normal for components of the wheel to rise to above 100C after barely a few kilometers of driving? Maximum speed was around 80 km/h because of how the roads are designed in this area.

The hottest part of the wheels after driving will be the brake discs which can easily exceed 100 °C.

In this video, Jason puts a thermal imaging camera to good use. Temperatures exceed 140 °C: 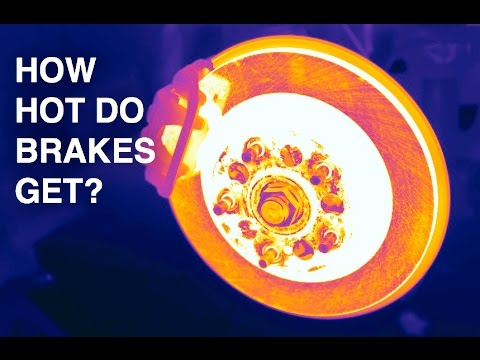 Of the 300 kJ kinetic energy, if half goes to pads and half to rotors the pads could take about 150 kJ of this. Even 63 kJ is enough to heat them to a temperature that boils water.

Edit: as Zaid correctly pointed out, most vehicles have about 65/35 front/rear brake force distribution. So, the front rotors (20 kg) could get 195 kJ. 80 degree rise for them is half of 1568 kJ, or 784 kJ. Still one brake application from 80 km/h to 0 km/h will not heat the front rotors to boiling temperatures, although multiple brakings could do the job.

You will probably find that it was the brake disc that was hot and stopping a car from 80Km/h produces a reasonable amount of energy to store as heat in a small piece of metal.

DON'T try touching the disc to find out if it is hot after braking !! Having done that I can tell you they get hot surprisingly quickly.

This is why the fluid should be in good condition as the heat can cause the fluid to boil especially if it is old and has absorbed water - which it does over time.

One car I remember had rear discs and was taken out on a road test - the driver forgot to release the handbrake... Came back saying the engine needed a service as it would not exceed 60mph - we just looked at the car and laughed as the rear discs were still glowing - the customer had complete new rear brakes (discs, calipers and pads...)

Please never throw water at the wheels when you've driven for an extended time. Your brake discs may likely warp if they were hot. Your water reaches the outer face of the discs, so they will rapidly cool down. The inner side won't so the disc will easily warp. It may not be much, but warped discs are very annoying.

The wheels (ie. rim and tyre) will likely never reach 100C but 70C is not uncommon for tyres during a long drive in warm weather. The less pressure the tyres have, the hotter they will become. That's because the tyres constantly deform during driving, which causes the rolling resistance and tyre wear. Those are unavoidable, but the right tyre pressure minimises wear and fuel consumption, while keeping a safe amount of traction.

Brake discs and pads will get much hotter. When you've hit the brakes really hard, they can turn blue by annealing from that temperature. That hue means it's been at least 300C. Now that's a rather extreme situation, but it's not hard to get them over 200C when braking hard a few times. When driving normally, i'd expect discs to have an average temperature of around 70C. They're not near room temperature as you might expect. They're continuously fed with heat from braking, tyre friction, engine heat, etc. Braking hard a few times is enough to get them to 200C.

Recently, I had to brake from 160km/h to around 30 in a short time. I already used the brakes rather hard just before, and now I smelt the pads. So they got quite hot. The outer rim of the discs had a blue and yellow haze on them, indicating they had seen temperatures of at least 300C.

A sticking brake will definitely do this (personal experience over similar distance). Yes you could achieve it in 'normal' driving, but only in fairly unusual ways - if you yourself kept the brake applied (perhaps a sustained steep downhill) or kept accelerating and doing hard stops, but realistically this is not normal. As others said, check whether it applies to all or some wheels - just one wheel would clearly be a stuck caliper. All wheels could perhaps be caused by a brake pedal/brake circuit problem. Also a sticking caliper (sticking enough to make it this hot) should be noticeable as a 'deceleration lurch' when you take your foot off the accelerator.

Because I've had a sticking brake before (car often not used for a month) I keep an eye on mine - carefully putting my hand on a wheel after driving. Slightly warm is normal. Hot is wrong.

However you've assumed steam means it reached 100C. The water hissing/crackling would mean that, but just steaming a bit could happen at a much lower temperature. My fence steams (emits visible water vapour) after rain when the sun hits it, but it isn't 100C.

3
Should I throw away my wheels after they bumped in the sidewalks?
4
What are the yellow triangles on truck wheels for?
8
Can summer and winter wheels be of different size for the same car?
5
Considerations for downsizing wheel diameter
2
I'm looking for wheels for my car (first time buyer). Why isn't anybody saying what the full bolt pattern is?
2
What are the consequences of driving my car with low coolant for five minutes without reaching the limit on the temperature gauge?
1
my driver side front rim was steaming hot after driving 130km/h through the mountains and severe braking for a couple hours
8
Why do mechanics give the wheels a spin after raising a car for inspection?