How do I remove a pulley where I have no way of stopping it turning anti-clockwise, like I'm turning the nut?

I've been told I need an airgun, but I have no means of getting one. An alternative is a tool that looks like this. It has a handle of flat steel that splits into a wide U, almost Y shaped but the V part of the Y is a U. At the end of each side of the U is a pin, and a pulley has a hole on either side of it's main nut, so when you put this thing on the pulley, you can hold it to stop it turning while you loosed or tighten the main axle nut of the pulley.

Does anyone know what this thing is called?

The "air gun", or "impact wrench", is the powered version of an astonishingly cheap and effective hand tool called an "impact driver", which translates the force of a hammer blow to the butt end of the tool into rotational force at the bit. One of these babies is capable of applying a very large torque to a nut -- mine claims 200 ft-lbs. per whack. The most common application is freeing frozen fasteners, and it might do the trick here too.

Another option, which I've used when changing my timing belt, is to use the belt as a "wrench" for the pulley. In order to get at my oil seals, I wrapped a section of the old timing belt around the pulleys. With the belt cinched tight in a pair of locking pliers, I was able to stop them from moving just long enough to crack the nut.

Yes, there are a variety of tools like what you describe that come under the heading of an automotive pulley holding tool. If you look through the result set of that search, you'll see that the Y-shaped wrench style that you describe is only one of the choices. Another that may apply to your application is almost like an inside-out socket that grips the inner walls of the pulley. Attach that to a long breaker bar to immobilize the pulley and use your other tools to remove the securing nut.

If you provide more information about your specific application, I could replace the Google link with something more specific. 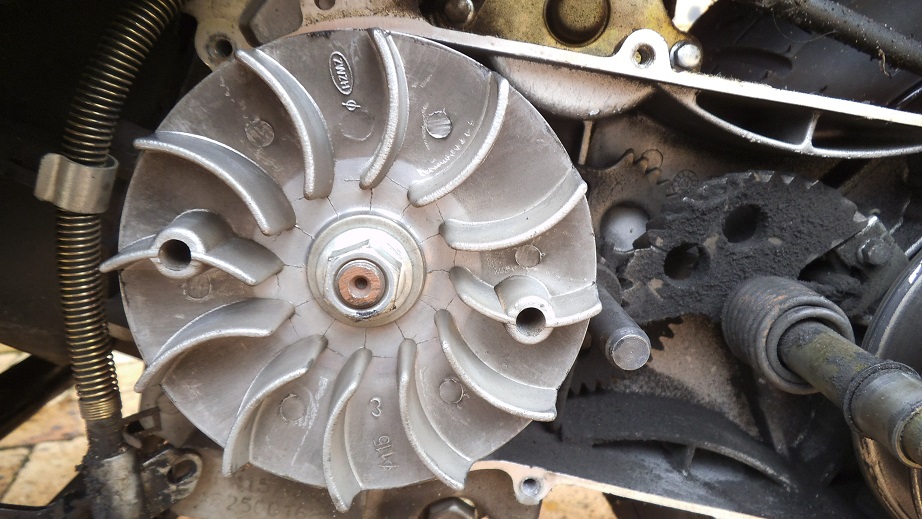 I solved the problem using locking pliers on the main plate of the variator pulley, so that they locked under the kick start axle to the rigth. I then used a short length of pipe on the wrench and several sharp upward jerks. The bike only fell over once before I 'cracked' the nut and could loosen it without the extra leverage of the pipe.

4
How do you normally screw/unscrew bolts on the type of belt pulleys that has 3-4 bolts?

12
How important is it to use a real flare nut wrench when removing the fuel line on an old Ford tractor?
3
How to properly tighten a wheel on a bench grinder?
9
Torque wrench or impact gun on large bolts
5
How to setup the car so that while driving I do not have mist glass?