Q - why is the circuit described below protected with a 40amp fuse when the cable to the motor is 2mm² (I cut a bit of cable out and measured strand thickness and quantity, 37 * .26mm = 1.98mm²) and therefore likely rated for 25amps max. (All the vehicle wiring shops, that I've looked at, list 2mm² thin wall cable as rated for approx 25amp max.)

Am I misunderstanding something about the max rating?

Background to question - I was planning on wiring the motor direct as there is a fault somewhere (tested motor, relay, fuse and resistor pack and they are all good) and I don't want to pull apart dash to find offending wiring but this has stumped me as I assumed I'd need 6mm² cable to match the 40amp fuse but manufacturer uses only 2mm².

I guess the motor may well be drawing considerably less amps (not tested) but then the question still remains why use a 40amp fuse. 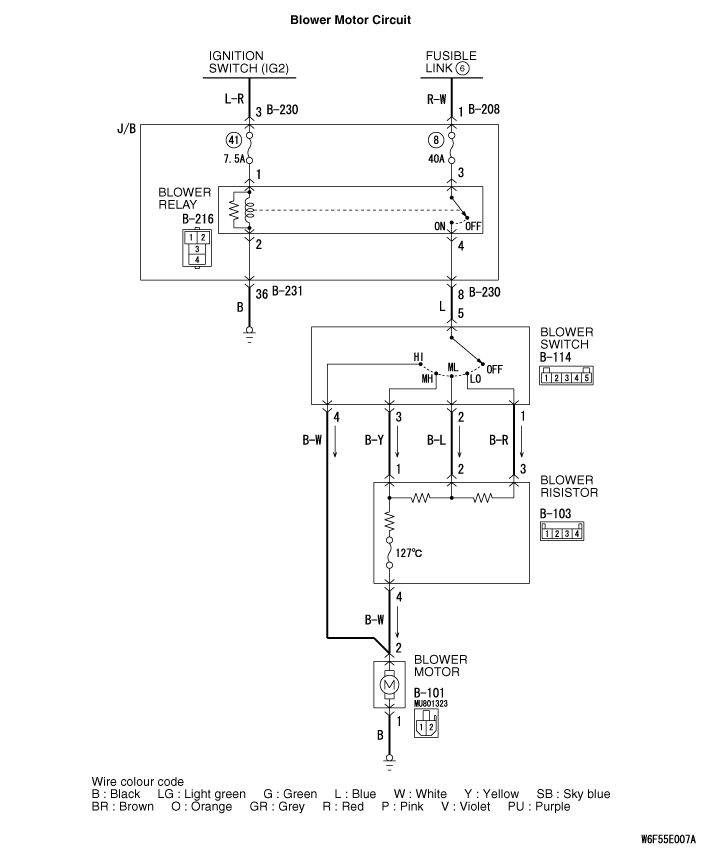 The maximum rating of 25A will be for continuous use. The 40A fuse is there to blow very quickly in a fault condition.

If you look at this page https://en.wikipedia.org/wiki/American_wire_gauge 2mm² wire will take 166A for 10 seconds or 633A for 1 second before it will fuse. So the 40A fuse will have blown long before the 2mm wire will fail.

I would suggest that you should find the source of the fault - probably in the wiring as you suggest as it could get worse and cause a fire (not the best thing in dense traffic with no place to go).

How do I know - I have had to repair that type of melted wire / fire damage before and it takes time & skill.

Another factor to consider, from the point of view of electrical design, is that a circuit with a load that never exceeds the wire rating under normal conditions of operation can be deemed incapable of causing overload i.e. you don't need overload protection.

In this case you only need to protect against a serious fault such as a stuck fan motor or a short circuit. As long as the fuse operates soon enough to protect the circuit wiring in that situation, you can make the fuse rating as high as you want.

Compare this situation to a cigarette lighter, which needs overload protection because you can as many loads to it as you want, which can overload the cigarette lighter wiring despite there not being a malfunction with any of the connected loads. In that case the fuse rating would need to correspond to the continuous current carrying capacity of the wiring.

The insulation used on a wire also determines its maximum current rating. 25 amps with pvc insulation becomes 30 amps with THHN insulation and 50 amps with Teflon insulation. In the short term a over current condition will blow a fast-blow fuse first.

You would be surprised what a given gauge of wire can take for just a millisecond, long enough to pop a fuse with a rating double that of the wires constant current rating, and that depends on the insulation used. That 2 mm wire could handle 50 amps if it had Teflon insulation. Yes, the wire will get very hot but far from melting. Teflon can tolerate 500 degrees F before it burns.

EDIT: based on a comment by Solar Mike I should mention that these are open-air limits with only the ambient temperature as a boundary. In a closed conduit NEC code for multiple THHN hot wires cuts the amp rating by half.

For transformer windings the coating is enamel or a high-temperature-rated epoxy. Due to heat build up in the core the current rating for a given gauge of wire is 50% of its ambient (free air) rating.

An inductor inserted into a current path should have wire rated for twice the current of the connected wiring. 12 awg carrying 30 amps max needs an inductor rated for 60 amps. It has to due with start-up surges for motors or a lightning strike, to prevent core saturation.

Not the answer you're looking for? Browse other questions tagged wiring fuse heater-blower or ask your own question.