Dispute with insurance over broken tooth in power steering drive - do I have a case?

My wife was in an accident around August 22, 2017 in our 2010 RAV4. Another driver hit her from the side in the front right corner. The wheel was bent in. We got the car back around Sept 13th. They had done suspension work, replaced the bumper and right quarter panel. They added weights to the wheel to balance it. I’m sure there was other stuff done. I can look it up if you think it would be helpful. I have the paperwork still somewhere.

Anyway, I immediately noticed 2 issues the first time I drove it after getting the car back on/around Sept 13th: there was a vibration when you got up to around 65mph and the steering wheel felt consistently and uncharacteristically tight - I noticed that right away. I called the body shop and complained about both issues on/around Sept 14th. They ordered a wheel to replace the rebalanced right front wheel and I waited a few weeks for them to get that in and deal with insurance. In that time, the steering wheel loosened up and felt somewhat normal (either that or I’d gotten used to it). I got the car back with a new front right wheel in mid-October. They didn’t address the steering and I, for whatever reason, didn’t press the issue. I wish I had...

Around the second week in December, I noticed that there was some play in the steering wheel and an intermittent knocking noise associated with turning the wheel, sometimes accompanied by a snapping “give” to the steering wheel.

I took it into service, not making a connection with the accident. Initially, the service advisor said that the steering shaft was worn, but after they replaced that and the issue wasn’t resolved, they discovered that the power steering drive felt like it had something floating around inside it. They guessed that a tooth on a gear had broken off. The guy was very apologetic - looked shocked even. He said that in his 20 years on the job, he’d never encountered that before, which prompted me to ask, “could this be related to the accident we had a few months ago?” And he seemed like that clicked, as if that explained it, and he said it could. So then my insurance, which had already covered the initial work and the wheel replacement got involved.

Ultimately, my insurance has claimed that the broken tooth in the power steering drive could not be related to the accident because the rod leading into the drive wasn’t bent or damaged. They claimed that, while rare, the broken tooth is a known issue of wear. They also pointed out that I’ve put around 5000 miles on the car since getting it back (which I haven’t confirmed - but am taking their word for it).

There’s no written record that I’ve found of me having complained about the steering the day after we first got the car back and I feel like their explanation doesn’t account for the issue I detected right away with the steering back on Sept 14th-ish. Maybe they don’t believe me. I don’t know. I don’t have any way to prove I complained about the steering other than my testimony, but it’s possible the guy I complained to might remember, though I recall he seemed mainly focused on the wheel, so I’m not optimistic.

So I have a few questions:

My total bill, for the shaft, power steering drive (aka steering rack), and the loaner rental was over $2600. I am exploring my options. I feel strongly, simply by the coincidental factor and the admitted rarity of this type of “wear” that this damage is from the accident. But I wouldn’t want to make the insurance company pay if it is likely to be normal wear, as they claim. So I’d appreciate anyone’s insights on this matter.

I'm going to preface my answer by stating: Pay for the steering and chalk it up to experience. I'm not a lawyer, but can tell you this is a "no win scenario".

In my humble opinion, yes it can. First of all, how do you know it was bent in at the top? It could just as easily have been bent in at the side, then the wheel turned to sit at the top of the spin. If the wheel was hit dead on the side with a quick enough strike, this could have caused the gear where the rack and pinion meet to get a stress fracture without causing damage to the tie rod ends or bar which joins them.

Absolutely. If the tooth was damaged as I've stated above, it may have just been cracked or slightly displaced. This would have caused a binding sensation just as you described.

I don't know. Who knows if anyone has done this kind of testing, so I doubt there'd be any corroborating evidence to prove anything. We have to go on what is logical and supposition about how it might have happened. (This is the reason you are going to end up paying for it.) I can see where there may not be any damage to the rod and still provide enough shock to the rack and pinion to cause the damage. The problem is, I'm some unknown person out on the internet writing a sad sob story to someone who's going to be out $2600. There's just no way to prove anything one way or the other. When it's your word against the insurance company, who do you think is going to win? Exactly.

Here's two images of what makes up the tie rods in your RAV4. The first is the outer (the bent one) and the second is the inner tie rod (the straight one): 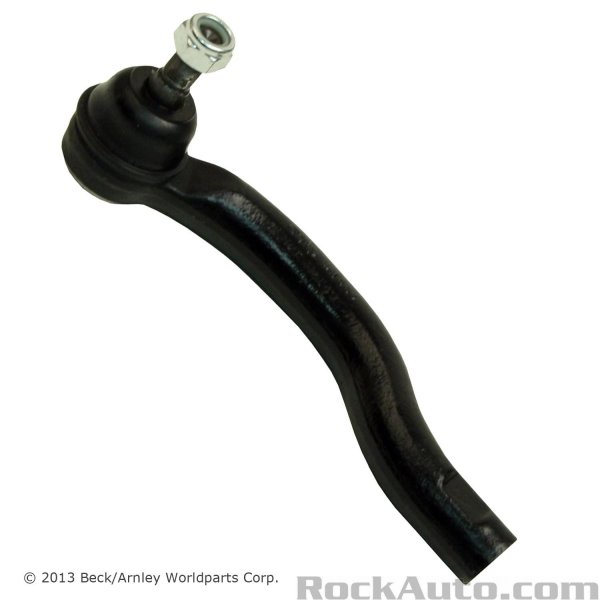 As explained above, your assessment of the rack and pinion having a tooth displaced seems accurate to me. It seems the logical thing to have happened. All it does is takes enough stress in the right direction at the right time to cause what you're talking about (see also: What is a stress riser?). Is it common? By all means no, but it does seem logical. All it does is takes the right amount of stress at the correct angle and one of the teeth could have been dislodged. Even if it was to the point of just a starting crack, which grew larger over time, then had the tooth come out, it seems from your description what the issue was. Again, proving it is a whole different thing.

One last thing to look out for which may go bad if it wasn't already replaced by the shop is the wheel bearing. In situations like this where the wheel takes a hit, the wheel bearing absorbs a lot of the shock, which may cause a flat spot in the bearing (either race or one of the bearings itself). This may not be evident at first, but will wear out very quickly (over a couple of thousand miles). If you feel what may be a slight grinding on the side of the vehicle where the damage occurred, this may be the issue. Just be aware of it so it doesn't leave you stranded or so you don't end up causing other damage in the process.

Not the answer you're looking for? Browse other questions tagged toyota power-steering damage rav4 or ask your own question.

5
What is a stress riser?

3
Steering very difficult on 1996 Taurus
11
What could be a likely cause of unusual "torque steer" after repairs?
11
Is it bad to drive a vehicle if power steering is defunct?
3
2007 toyota corolla vibration after front wheel damage
6
Is it OK to not fix a power steering rack leak?
5
engine push rods
1
Toyota Aygo, power steering
0
Can the detachment of a drive belt affect the steering rack?
3
Power steering pulley broken. Not drivable?
3
1991 F150 Power steering failed