The fuel efficiency on my 99 Nissan Almera 1.6L MTX has always been a bit below what I would expect, and the idle has gotten a bit rough lately, so I started poking around with a scope to see what I could figure out. I recently replaced the O2 sensor, and I noticed that at idle it was pegged lean, even though there was no evidence of any vacuum leaks. After a bit more poking around I noticed that the O2 signal was actually all over the place at idle, and that revving the engine for 10-15 second could force it into a different state. These are all at 500ms/div and 200mv/div.

For example here it's pegged rich with fast oscillations: 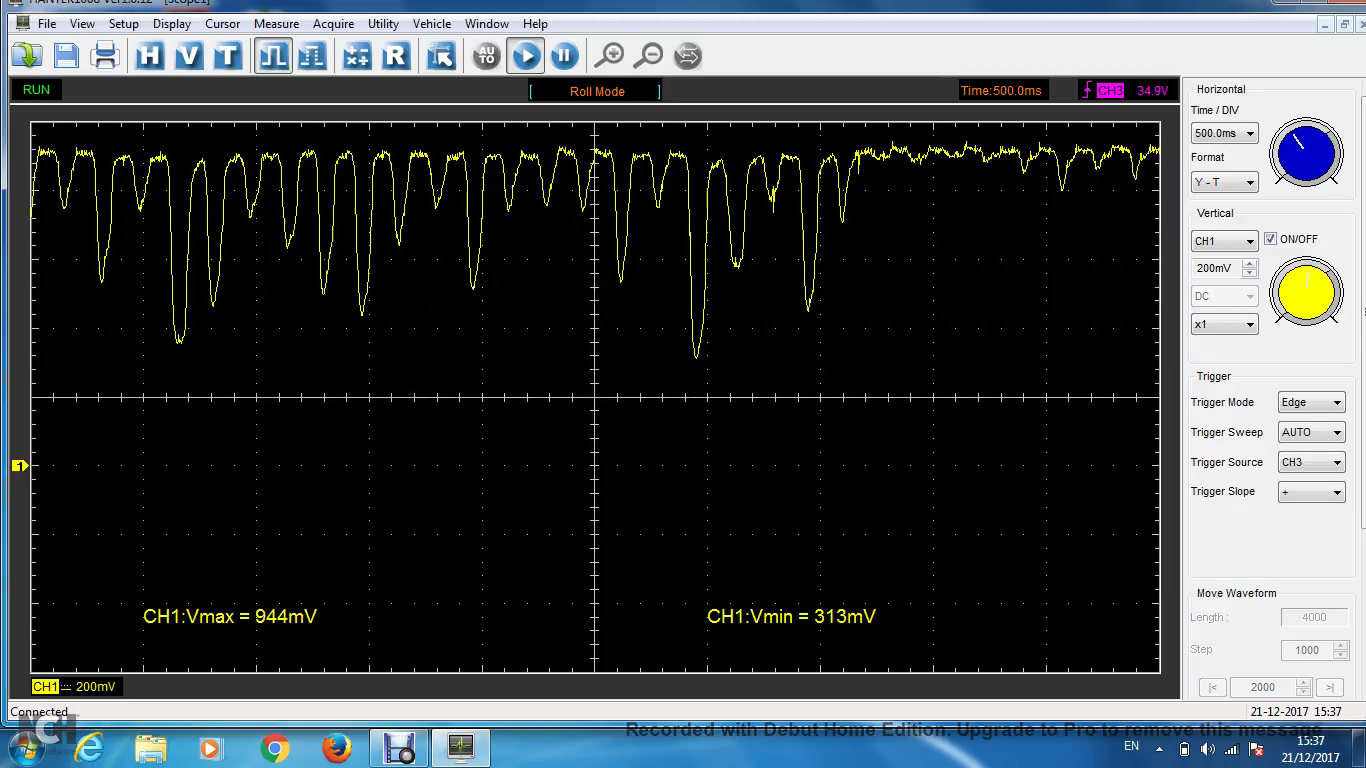 And here it's pegged low with oscillations: 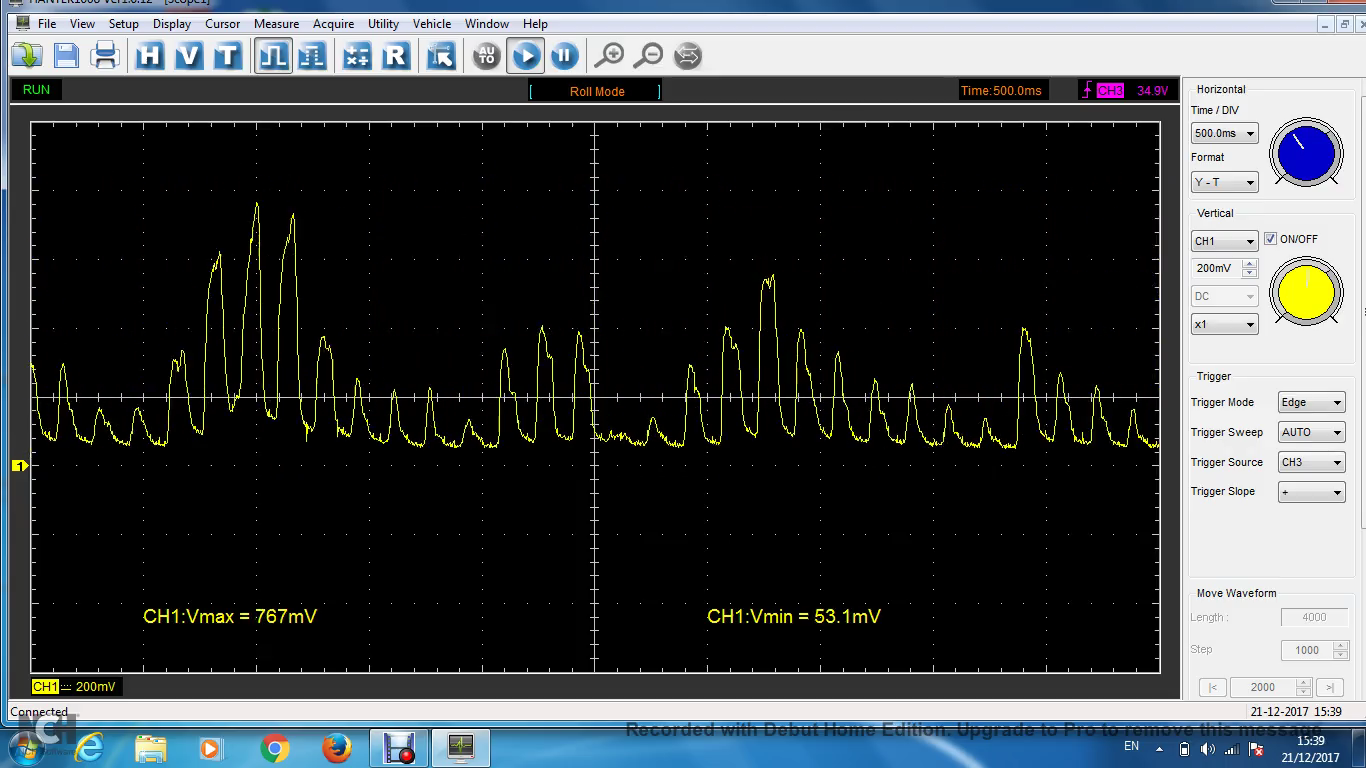 You can see how there is an overall pattern of lean / rich fuel control going on but with breaks / oscillations in the larger curves.

And even when revving the engine at high speed I can see quick oscillation in the larger fuel control oscillations like those circled: 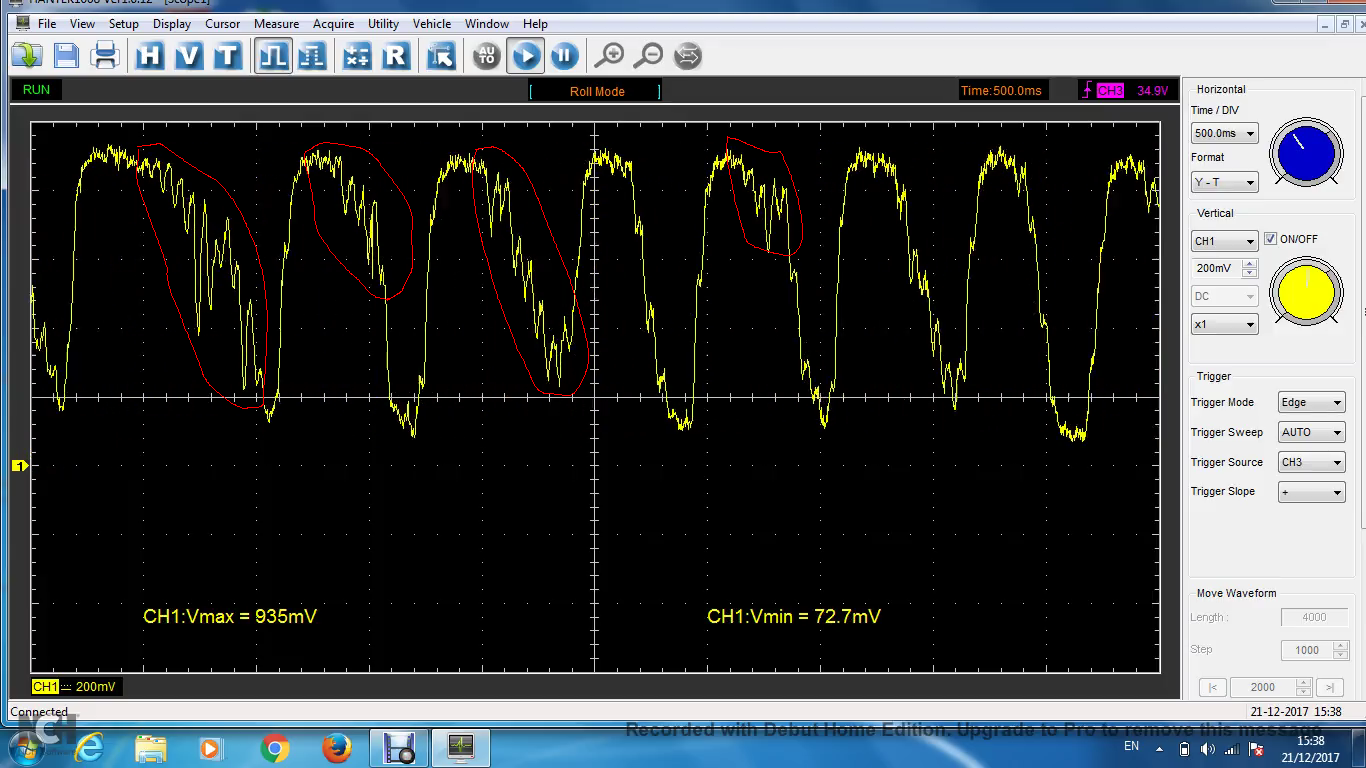 Since the spark waveforms looked fine I looked at the injectors voltage waveform and what I saw looked like a closing pintle bump that is jumping around between two spots almost constantly. These are 1ms/div and 10v/div. Sometimes it's like this: 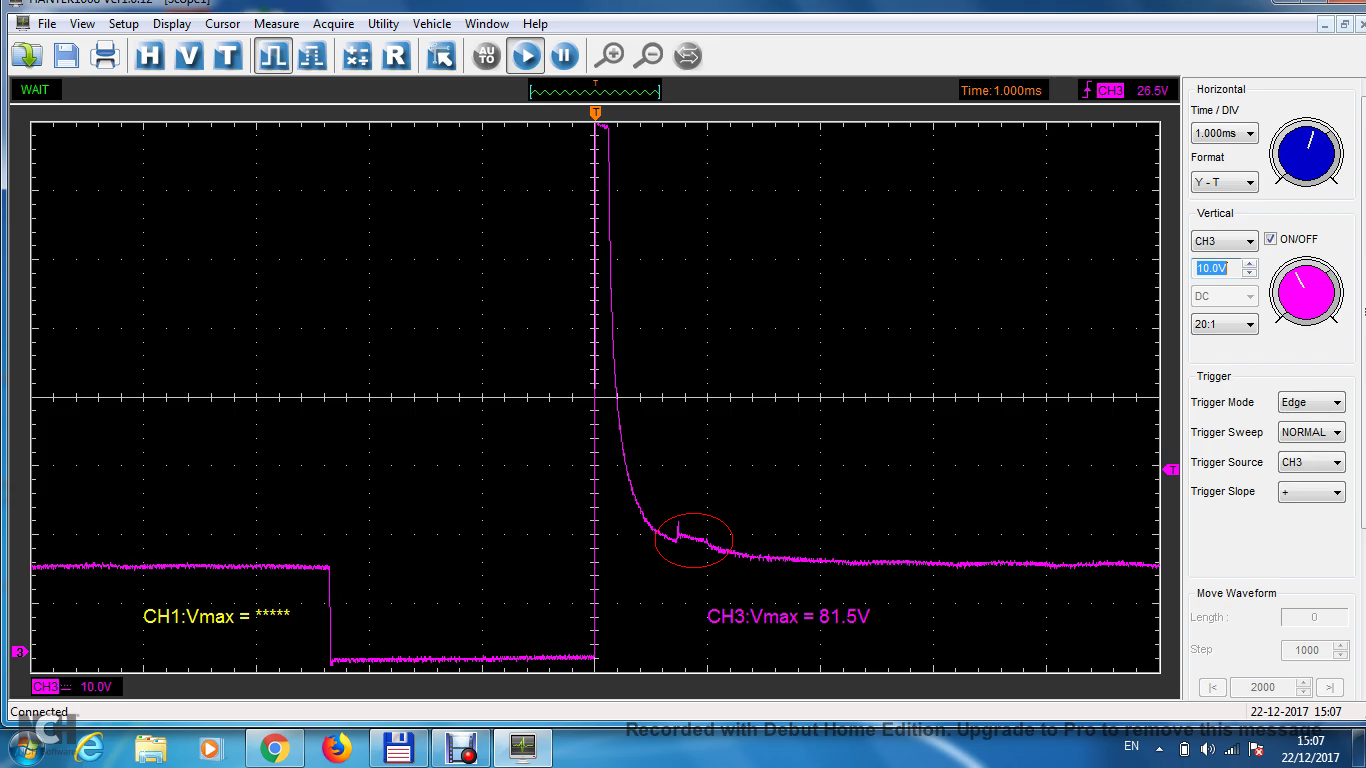 And often it moves off to the right like this and would be almost indiscernible if it wasn't for the small voltage spike: 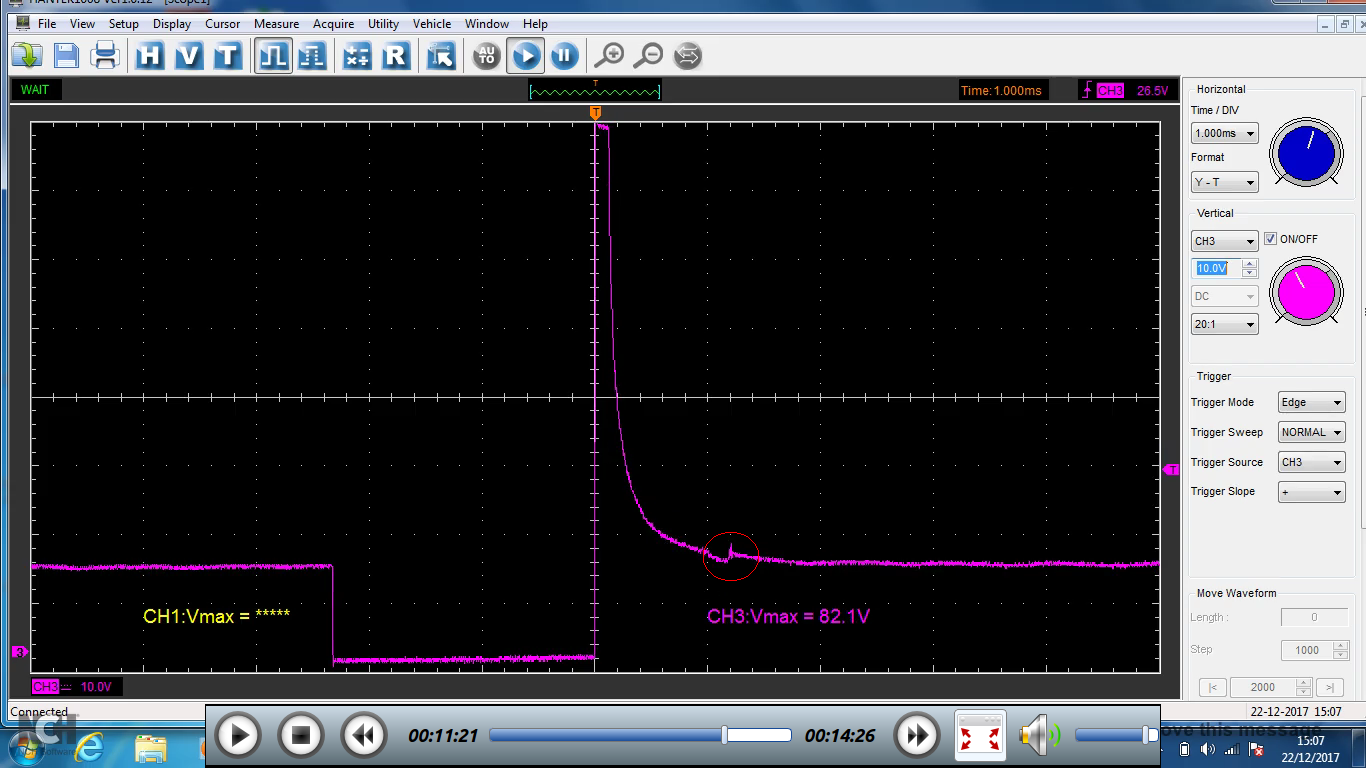 The thing is that this is really the first time I've looked at something like this and I'm not even sure it I'm actually looking at the closing pintle hump or not. Also, when the radiator fan comes on the pintle hump stabilizes in the first position.

All four injectors exhibit this waveform behavior and I've read that this indicates sticky / dirty injectors which may need replacing.

However, since I lack experience, I'm not sure if what I think I'm seeing is actually what I'm seeing, why the rad fan coming on would stabilize the pintle hump, and whether or not there may be some other explanation for the crazy stuff I'm seeing on the O2 sensor at idle.

I don't currently own a low current amp probe, so I can't check the when the pintle is opening.

1st comment is on the injector voltage waveform. To see what is happening with the pintle an amperage waveform is needed. I have used this to verify that the injector is opening. The pintle close point I have not used or studied.

The O2 sensor waveforms at idle look normal for an older engine, messy as they are. They are trying to cycle, I would not characterize them as pegged rich or lean. It is not generally helpful to judge much about fuel control and combustion quality from front sensor idle waveforms. It is challenging to get good fuel control cycling to happen at the low exhaust flow rates of idle. The main driver of this problem, however, is poor and inconsistent combustion quality, partial misfire. These sensors get overwhelmed with unburned fuel which causes the sensor to have a very messy waveform and they tend to read, on average, lean. This is why, on systems equipped with after catalyst mixture sensors, most OEM's use the averaging effect of the catalyst to smooth out the mixture and then use the after catalyst sensor to gain the mixture information. The higher rpm waveform shows normal cycling and excellent sensor response times.

The small variations seen on the tops of the sinusoids and the larger one seen on the downward rich to lean slopes indicate excess fuel in the mixture. That does not mean that the overall average mixture is rich, just that the rich side of the cycle is seeing more fuel than this sensor can burn off smoothly. This is not unusual in older engines. It usually caused by partial misfires in one or more cylinders.

If I were testing this engine I would test for the usual causes of incomplete combustion such as poor engine breathing, Poor compression, Injector volume or atomization problems, poor spark.

It would be helpful to see an after catalyst sensor waveform also as it is the best representation of the average mixture. If possible show a graph with both oxygen sensors overlaid at cruise speed for 10 seconds.

So, just to follow up on this, I did a fuel pressure drop test and found that two of the injectors where dropping about 10% less pressure than the other two, cylinders 1 and 3. This corresponded to the ones which had the later pintle close on the waveforms. After replacing all four injectors with some from the junkyard, the hacksaw pattern has gone away. The car still had some other issues, and needed a new cap and rotor, but that was unrelated to the hacksaw pattern I was seeing in the O2 waveform.

Not the answer you're looking for? Browse other questions tagged nissan fuel-consumption o2-sensor fuel-injectors waveform or ask your own question.