Is this plug fouled due to being too cold?

When changing the plugs on my 99 Nissan Almera 1.6L I noticed that the tips of all the plugs looked a bit weird with these white deposits ( all four look like this ): 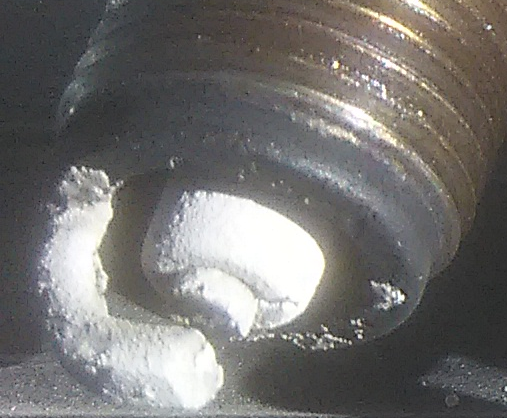 Upon closer inspection, I realized that the plug was one heat range number too cold. It was a NGK BKR6E11, and the engine calls for a NGK BKR5E11 or similar. According to the NGK website:

For NGK, Denso and Pulstar, the higher the number, the colder the plug. In identical spark plug types, the difference from one full heat range to the next is the ability to remove 70°C to 100°C from the combustion chamber.

Further on it states:

Running too cold a plug can only cause it to foul out, whereas running too hot a plug can cause severe engine damage.

I'm wondering if that white crud is the kind of fouling they are talking about due to too cold a plug, or is it something else? I ask because when I think of fouling I tend to think of black carbon buildup.

I found a few more examples with pictures that look very similar to mine which say it's ash fouling:

Deposits Appearance & Symptoms: The electrodes—center and ground—are covered in an ashy coating. As a result of this masking of the electrodes, your engine may experience a misfire. This build-up of combustion deposits can eventually (but not usually) fill in the space between the two electrodes.

As shown below, a buildup of combustion deposits stems primarily from the burning of oil and/or fuel addatives during normal combustion. These are normally nonconductive. However, when heavier deposits are allowed to accumulate over long mileage periods, they can "mask" the spark, resulting in a plug misfire condition.

tl dr: I don't think it's because the plug is too cold.

Now that I can see the image, these look like ash deposits. According to this website, ash deposits are:

Caused by the use of leaded fuel, fuel additives, and/or oil additives. Check for worn piston rings and/or valve guides. Misfiring may occur due to the deposits on the electrodes. 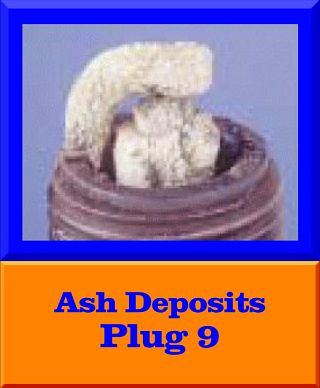 While the one in the picture is trashed, it would seem very similar to what yours looks like.

White deposits or blistering typically means it's running too hot or too lean. Too cold will manifest as a blackened tip because the fuel is not burning completely.

It's odd that you were running a heat range cooler and have a plug that appears to be running way too hot.

My advice would be to check your ignition timing with a timing light to make sure it isn't running too advanced, and also make sure you're putting in the correct fuel -- I suspect it requires regular unleaded, though the owner's manual or gas cap should tell you. Other causes could be a bad intake air temperature sensor, mass airflow sensor (or equivalent), or pre-cat oxygen sensor.

Not the answer you're looking for? Browse other questions tagged nissan sparkplugs heat almera or ask your own question.

3
Slow acceleration, high fuel consumption after spark plug change
3
What is the difference between normal, platinum, iridium plugs in petrol/LPG vehicle?
5
Gapping New Spark Plugs from the Dealership
2
Spark plug wires arcing when car is cold
2
Does electrode size/shape matter?
9
Follow up question on spark plug heat range
3
Sputtering at low rpm and massive loss of power, sudden onset and persistent
6
Lack of power when cold under load
3
Is hot desert weather the source of my recurring car problem?
1
Replaced ignition coil pack - should I replace spark plug too?