We're talking about a 2005 Volvo S80 2.5T 5-cyl engine vehicle here. Back in late September was the first time I experienced this engine shudder/stutter behavior when the tachometer dial went from say something around 2k RPM and dropped to round idle near 600RPM or so. The engine would be firing smoothly and then as the needle dropped near idle the engine bay would shake and the needle would surge up slightly and then fall to idle and things would rapidly settle after about 1 second of shudder.

I was in traffic on the highway today and decelerating as I approached a stopped car where my RPMs dropped and then I got into this stutter/shudder surge loop where the engine would shudder, then surge, then shudder then surge, something like 2-3s spacing between each for a total of like 3-4 rounds. When I got home I revved up the engine while parked and let it fall again and found the shudder was pretty reproducible. As the shudder occurred I noticed the headlights grew dim then recovered as the shudder left. I let the car rest for like 30 min and went back to move it to the carport and the same shudder occurred as the RPMs dropped.

I scanned my car and got two pending codes listed, the same as those that occurred in September:

I recorded about a minute of live data during about 5 or 6 engine revs. What PIDs should I inspect to gain some insight into what may be wrong?

I have the following PIDs recorded

What exactly could cause this combination of DTCs? How should I approach diagnosing this set of symptoms? Also what sort of risks are possible driving in this condition? Could a failing MAF stall the car while driving or anything like that?

EDIT: checked on the wiring voltages this morning, everything seemed as expected more or less 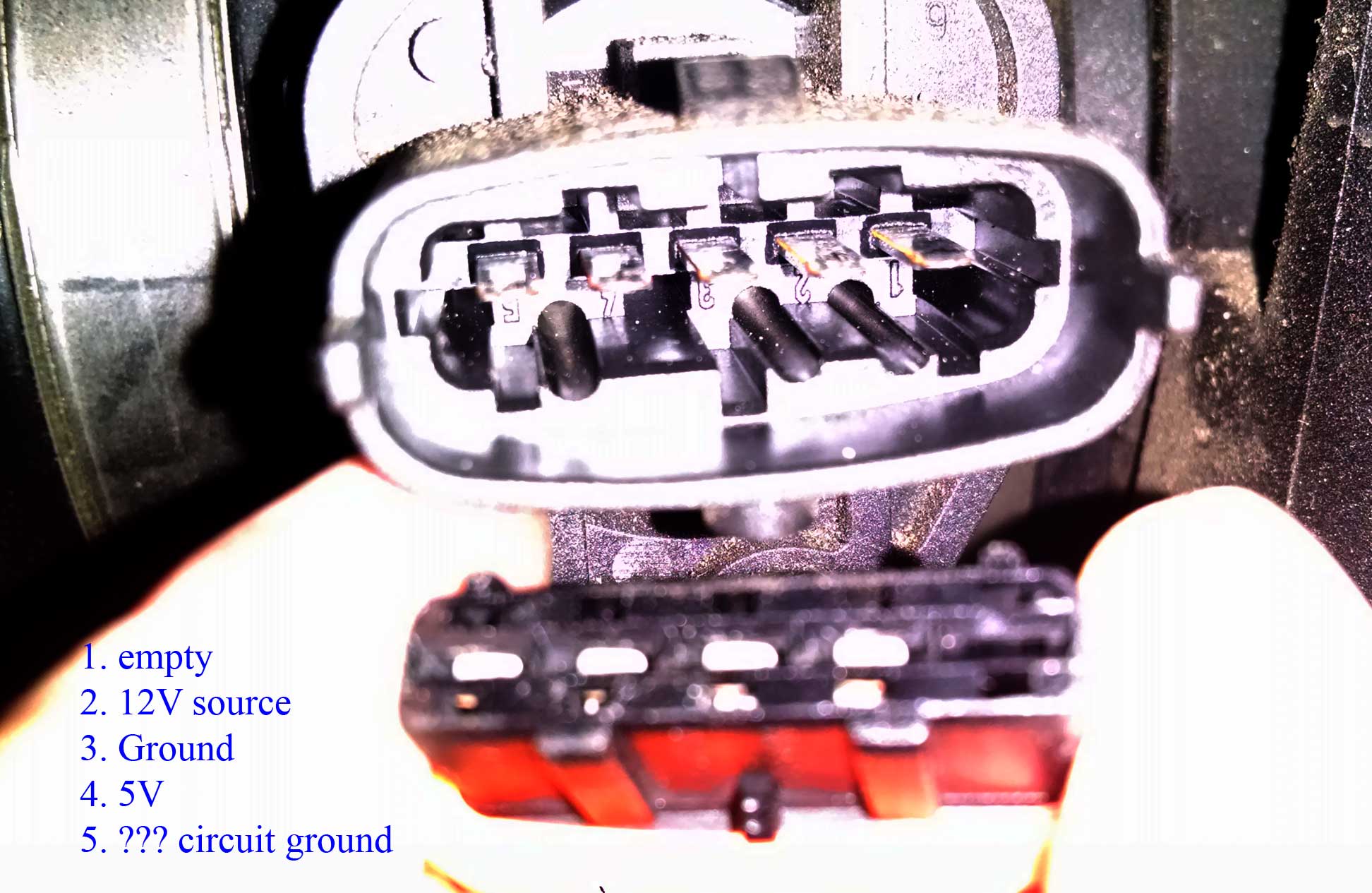 The MAF supplies air flow and temperature data to the car's computer, a failing MAF sensor can definitely produce surging at idle which is what it sounds like you have. You might also get hesitation or jerky acceleration, and find it's hard to start. A dirty one can also cause the same issues, so it makes sense to try cleaning it before replacing.

There's many videos on how to clean a MAF, and some people say you can clean it with acetone, I'd suggest a can of MAF cleaner spray, and maybe a gentle brush-down with a soft paintbrush. If it works it will save you 50 USD for the part, if not you've spent a few bucks on a can of cleaner you'll use anyway to regularly clean the MAF, which is recommended.

So far so good with the MAF cleaning, haven't had the codes pop up for about 850mi post cleaning and the MAF housing's interior and the laminar air screen were definitely dirty. I'm assuming the actual sensor itself was likewise dirtied up though I couldn't inspect any real dirt on its parts.

I gave the part a good squirt down with CRC 05110 Mass Air Flow Sensor Cleaner probably using anywhere between 25-30% of the 11oz can.

Here's some of the dirt that rinsed off that I managed to direct onto a fast food paper lap mat which you can see while the dirt was still suspended in the solvent. I follow this with another image after the solvent has evaporated (I did an artificial histogram autobalance to this second image to lend better contrast). 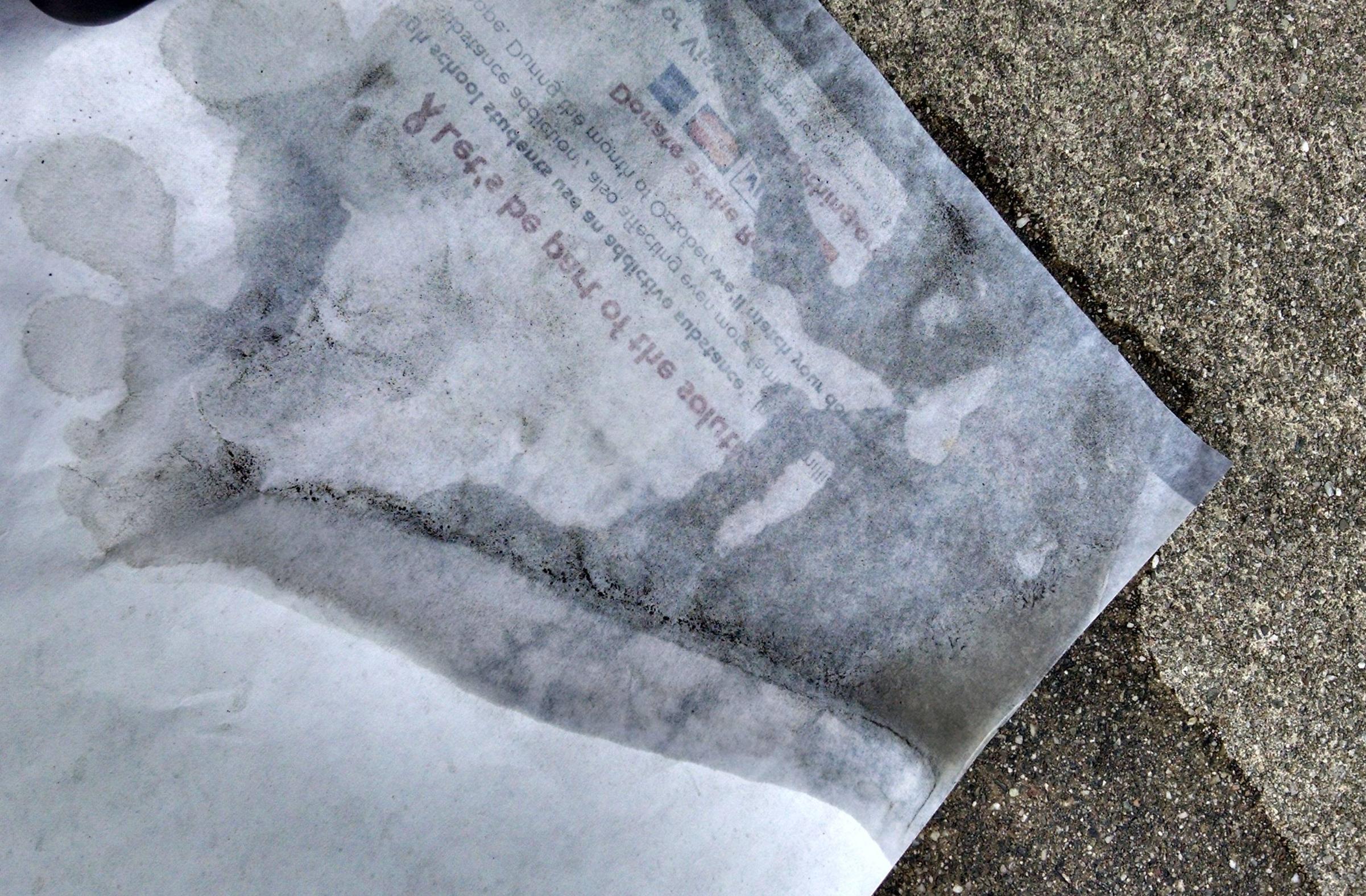 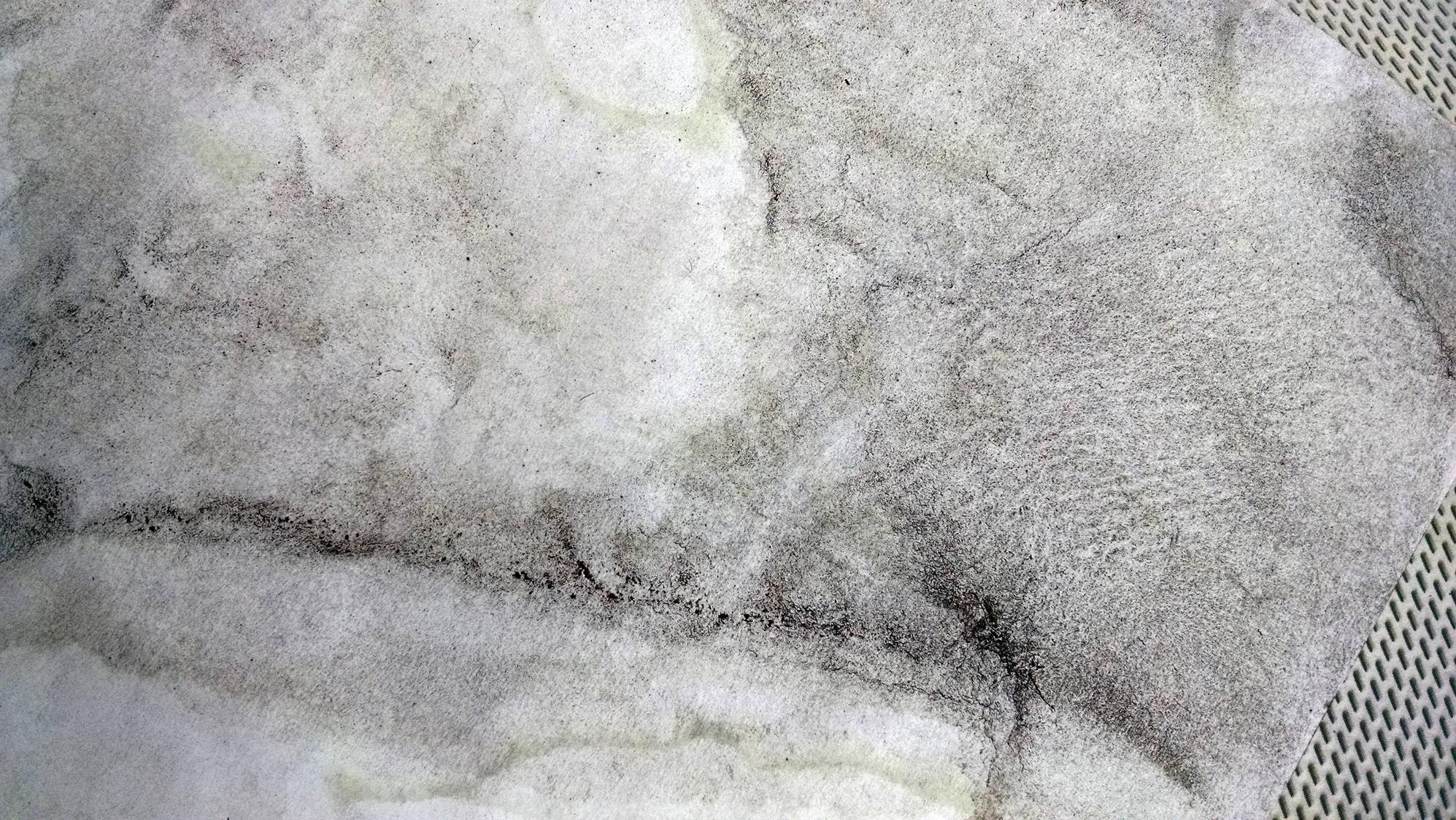 Here's an image of the MAF from the air filter side, you can really see the accumulated dirt on the surfaces. On the inner wall of the MAF housing you see this sandy dust like sediment too 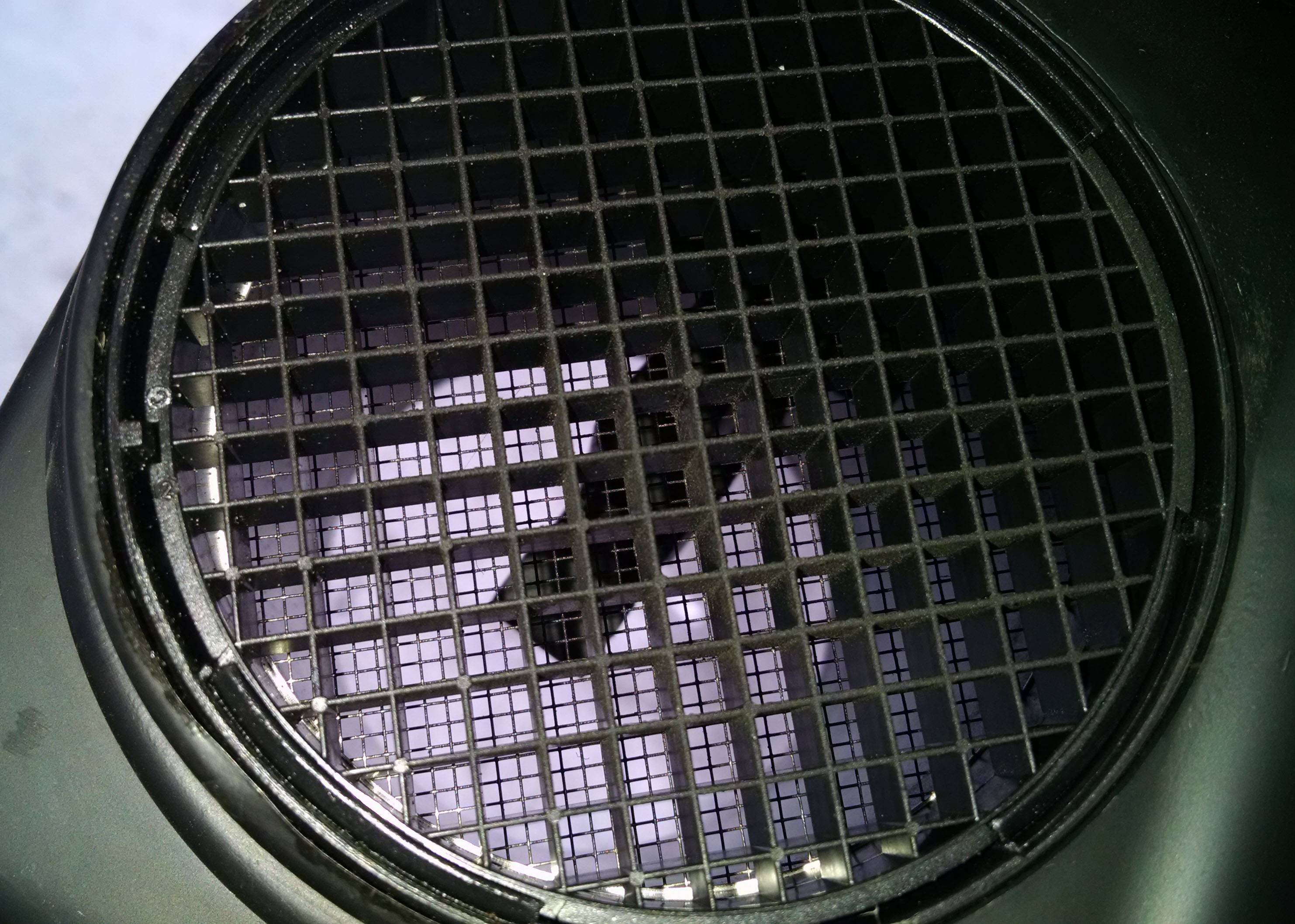 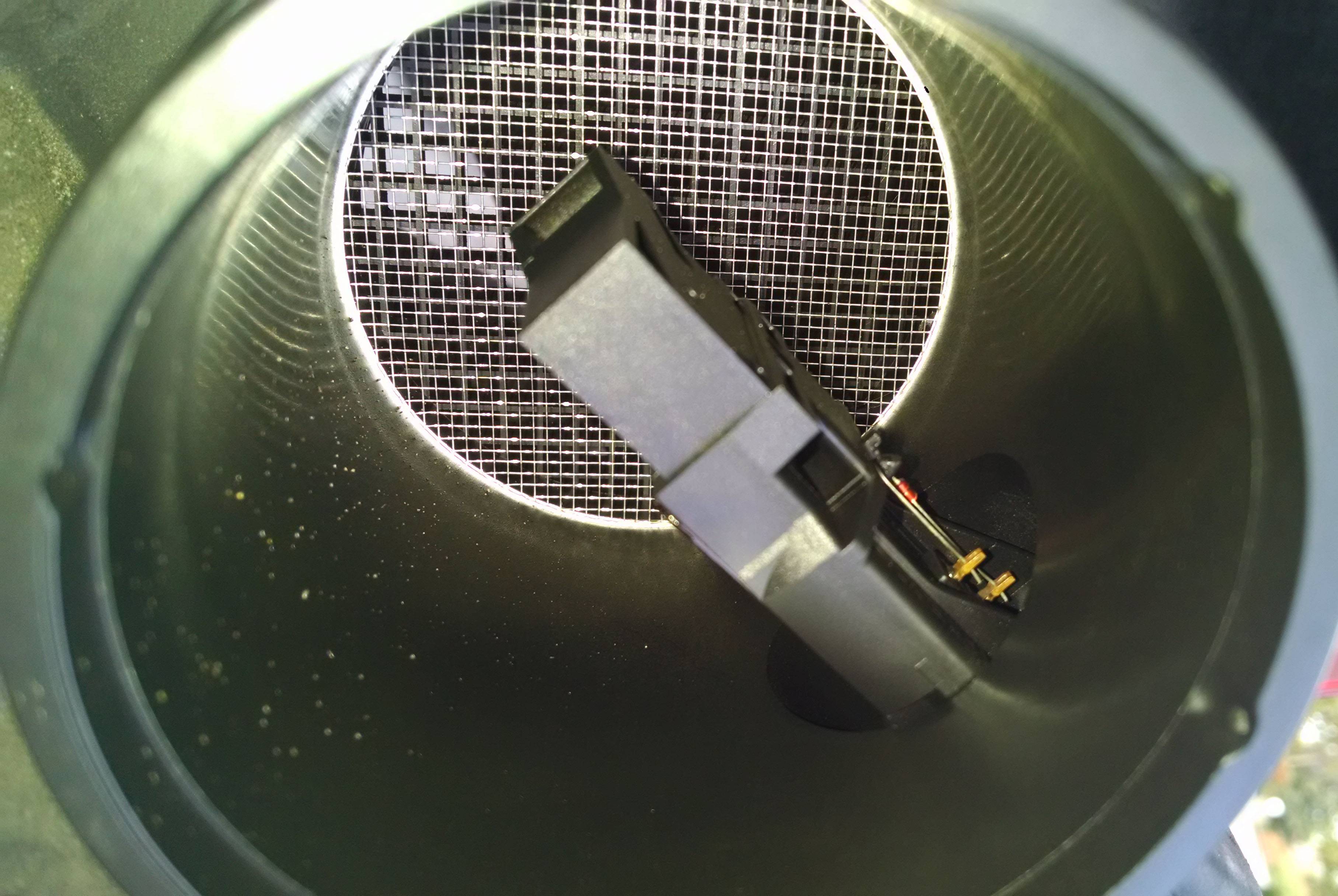 I definitely got the unit much cleaner than when I started. We'll see how long the fix lasts if this was indeed the root cause.

UPDATE I didn't realize it but the dirty MAF really did add hesitation to the engine, the gas pedal is a lot more snappy after this cleaning and I'm pretty sure the mileage has gone up a few mpg. I'll certify that in a future update since I've been doing a lot more highway mileage these days than normal. This hesitation degradation was very much like a frog in the kettle sort of behavior.

UPDATE 2/18/2018 The shudder at idle and DTC P0101 code returned this evening. I last cleaned my MAF at 85,182 mi and tonight I'm looking at 88,096 mi for a total of 2,914 miles driven. I ordered a new MAF sensor to arrive tomorrow to see if that settles the mater. I'll try another cleaning, maybe my air box is buckled or bowed out or otherwise not seated properly if the sensor comes back with a bunch of dirt sprayed off like before.

As GdD says in his answer a failing MAF is the likely culprit here - and would be consistent with the codes you are getting from the ECU. So that is where I'd start.

If a MAF clean/replacement doesn't resolve the symptoms then another potential cause (based on the symptoms you describe) would be the Electronic Throttle Module (ETM), these were problematic on the T5 engine (especially on early 2000's models) to the extent that Volvo extended the warranty on them if I recall correctly. And the early symptoms of the failure often presented themselves as stuttering/surging when revs dropped to idle.

Not the answer you're looking for? Browse other questions tagged engine maf p0101 or ask your own question.