I have a 2003 Honda Civic that has overheating issues. I took it to a garage and they 1st thought it was the thermostat so that was changed, Still overheating.

Then they said it was most likely a bad radiator. Changed that, still overheating.

They said it was a bad head gasket and they changed that out. I opted to have the whole head gasket kit used so everything in that area would be new. They had the head checked and said there was a slight crack in it but it was able to be smoothed down and was ok to use.

After all this was done, the car still overheated, and a new problem started. The car would intermittently not start. I could drive it without this new issue for a day or 2 no problem then all of a sudden it would happen. Last time I had to have it towed after waiting 2 hours trying to start it off and on.

Took it to an engine shop and left it overnight, they said they checked the compression of the bottom of the engine and it only registered a 2. So they said the engine was bad and I needed another engine. It would cost $1000 - $1200 for the engine + labour.

It has been sitting ever since. If any of the above had resolved the problems, it was worth it as I love this car, but I don't know if I should just try to sell it as is or continue trying to resolve these problems since so much has been done on it already.

If I did sell it as is, what would be a fair asking price? Thanks for any info / help you can give me. Any suggestions?

Someone had mentioned the intermittent starting issue could be timing belt. I have soaked so much $$ into this car

It just so happens I went through the same thing with my 2003 Civic LX. I had replaced the thermostat, but used an aftermarket one (Gates brand). While I'm not afraid of aftermarket parts, this is where it was wrong. After reading some online forums, the general consensus is you need to utilize an OEM Honda thermostat. Here is an image of the two different thermostats next to each other: 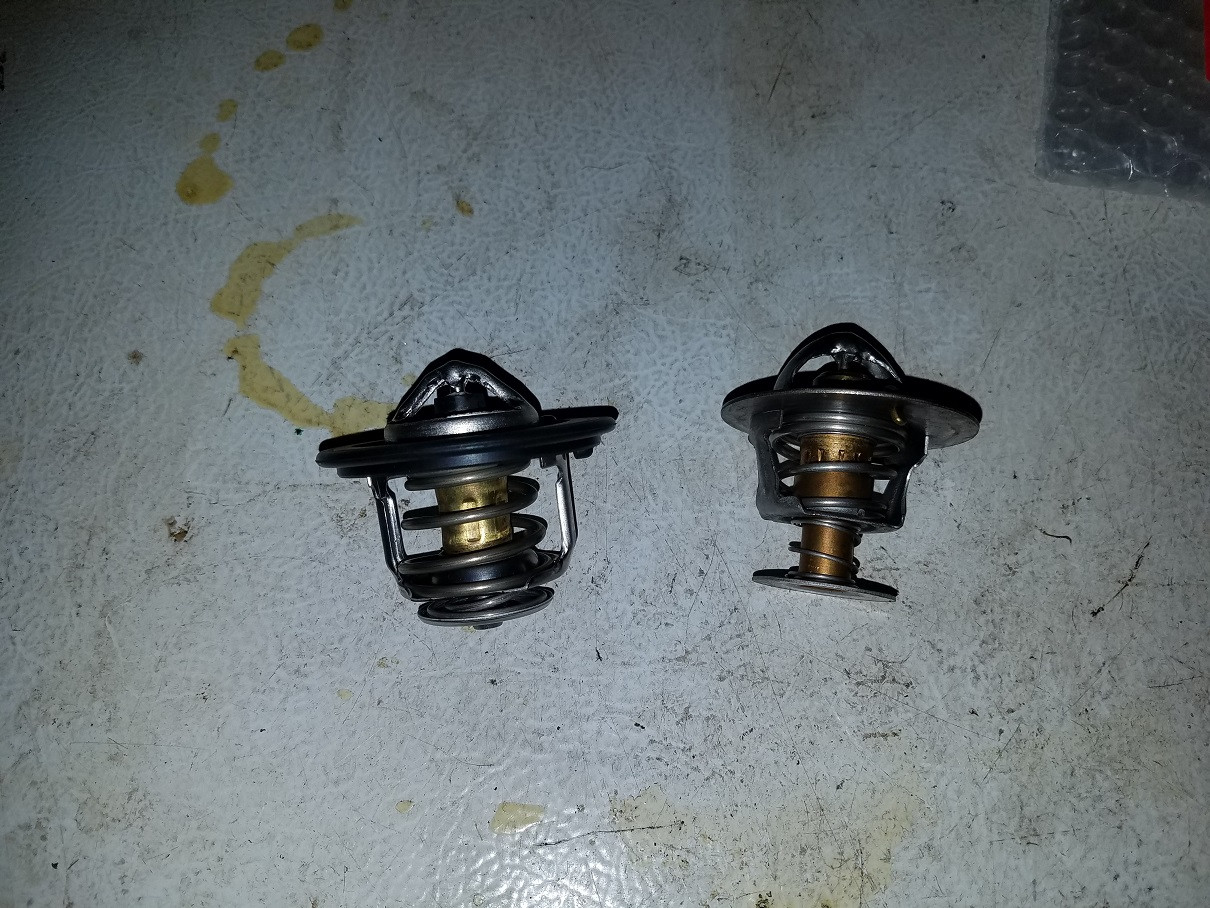 The one on the left is the OEM and the one on the right is a Gates. While both thermostats plug the hole and directs coolant traffic, you can easily tell they are designed differently. I don't know what it does differently, but the car definitely behaves better now.

The Gates thermostat cost me $6. OEM was $39. I asked the salesperson if it was made of gold. Bottom line is, I've now driven the car a 1/2 dozen times without any overheating issues thus far.

NOTE: I did do the same things which you've done as well, though the car needed these. I'd replaced waterpump, timing belt, hoses, and thermostat. It is a "new to me" car and I knew it had an overheating problem which the previous owner couldn't figure out. It took me a bit, but I believe this was the final answer. Car has been running great since.

The above also assumes you haven't done any permanent damage to the engine in the process of it overheating. If there is damage, all bets are off.

Check your reservoir container, this car has a history of the spout at the bottom getting clogged and causing the overheat issue. Take it off and make sure the antifreeze flows smoothly.

I have almost the exact same problem. The non-starting is a timing issue. If it's off by even 2 teeth/grooves it won't start or it'll bog down when it does start or idle funny. The over heating problem i had was 2 fold; the thermostat (i used an after market, didn't help. Used honda OEM, that worked. It's more exspensive but necessary. The other was the previous owner used radiator sealers which clogged up the hose that leads to the heater core. Everytime i ran the heat or air the engine overheated. I ran some cleaner through the system bought a new hose refilled it with antifreeze and it hasn't overheated since.

Had the sme non start problem. Found out the timing was out because the belt had jumped. Have a look at the position.