Need to figure out how much constant power car is drawing in the on position, without the motor running.

Issue: Need to have car on in order to have computer, stereo and all electronics functioning for hours at a time without the car actually running. I am trying to figure the amount of consumption in order to get a charger or tender of sorts that will plug into AC power and provide all the power needed for the car to be on for hours during displays and shows.

I was told I need to find out the max line power draw in watts per hour?

This is much simpler than its being made out to be.

The easiest way to do this is to get a simple "clamp meter" that reads electrical current, and clamp it around the positive battery cable while all the accessories you need are turned on. You already know the voltage is 12-14v, so you don't need to measure that. 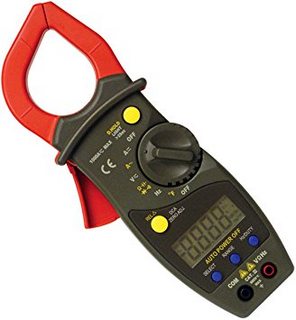 The meter will give you a reading, in Amps, of your current draw.

If you need a higher level of precision (you probably don't), there are also meters that can be hooked up in series with your battery (between the battery and the positive battery cable) that will also give you a current reading. These are normally more accurate, but harder to use, and they have a smaller maximum current that they can read.

Use a voltmeter across the battery and an ammeter in series (as mentioned a clampmeter - accurate hopefully) and get the values with all the things running you want. Power is then volts * amps ...

Better yet is to have a second battery with a split- charge system - caravaners do this and so do vehicles with electric winches...

Edit : added based on comments:

Any auto-electrician can do this with their eyes shut : well not really but this is a nice job : just let them know exactly what you want to run and how many hours and they can sort battery or batteries, split charge, fuses, safety disconnects. Speak to some garages or check the phone book for vehicle electrician / auto electrician.

Optima does batteries of both starting and deep cycle : deep cycle, as pointed out will be the best in this case. See https://www.optimabatteries.com/en-us/support/battery-basics/redtop-vs-yellowtop-vs-bluetop-battery

And I have no affiliation with them, there are other manufacturers who do deep cycle batteries.

Don't do this, it'll ruin your car's battery!

Automotive batteries are designed just for start the car's engine, their specs are lower than the specs of the so called "stationary" batteries, or "deep-cycle" batteries.

If you compare the price of replacing the batteries of a huge computer "no-break" (UPS - Uninterruptible Power System) and the battery of a car, you'll see that, even if the batteries have similar Ah specs, the UPS' batteries cost much more, they're expensiver because they have better specs.

You should avoid depletting the battery of a car at lower than, say, 90% of their full capacity. If you need to power many electronic devices in your car, for a long time, you should either keep the engine on, or use another kind of battery.

Wikipedia: "A deep-cycle battery is a lead-acid battery designed to be regularly deeply discharged using most of its capacity. In contrast, starter batteries (e.g. most automotive batteries) are designed to deliver short, high-current bursts for cranking the engine, thus frequently discharging only a small part of their capacity. While a deep-cycle battery can be used as a starting battery, the lower "cranking current" implies that an oversized battery may be required. A deep-cycle battery is designed to discharge between 45% and 75% of its capacity, depending on the manufacturer and the construction of the battery. Although these batteries can be cycled down to 20% charge, the best lifespan vs cost method is to keep the average cycle at about 45% discharge.1 There is an indirect correlation between the depth of discharge (DOD) of the battery, and the number of charge and discharge cycles it can perform.

An automotive battery is a rechargeable battery that supplies electrical energy to a motor vehicle. It is also known as an SLI battery (starting-lighting-ignition) and its main purpose is to start the engine. Once the engine is running, power for the car's electrical systems is supplied by the alternator. Typically, starting discharges less than three per cent of the battery capacity. SLI batteries are designed to release a high burst of current and then be quickly recharged. They are not designed for deep discharge, and a full discharge can reduce the battery's lifespan.

2
Is alternator/voltage-regulator supposed to power everything always at 13.5V+ at idle?
0
Choose Correct Diode