What would be the improvement, if any, for a motorcycle engine using an electric turbo like the one pictured below? 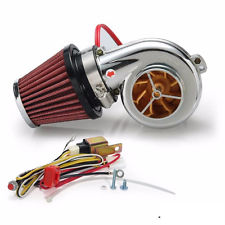 Having looked into this in the past, the problem with electric superchargers and why they aren't widely used is partially that doing the job of a turbo/supercharger (moving and compressing a lot of air, fast) requires both relatively high torque and relatively high speed, while not taking up much space (a consideration on motorcycles, less so on cars). Unfortunately, with electric motors, it's a "pick two" sort of situation unless you can spend a lot of money.

The other consideration is that you can't get something for nothing. If you have an electrically-driven supercharger, the several horsepower (think of it in terms of kilowatts from here on) required per psi of boost needs to come from your electrical system.

We'll estimate 3 kW (roughly 4 hp) per psi of boost. This is quite possibly less than the actual power requirement, but it illustrates the point just fine. To boost 8psi, you might need 24 kW of power. Your electrical system needs to provide all that power, plus enough to make up for losses to friction/resistance/etc. For comparison, if we take a pretty average motorcycle alternator that provides 20 amps/14 volts peak, you end up with 280 W. Not kilowatts, just watts.

When driving a turbo/supercharger off the engine, this is fine as your loss for providing boost is made up for by your power increase. However, as you can see from that line of thinking, you need to be able to provide a serious amount more electrical power than the bike is actually capable of to drive an electric forced induction system.

That said, if you were serious about it and believe you could engineer the losses to a minimum, you probably could pull a lot more power away into the alternator to drive the motor for the supercharger (by replacing the alternator/generator with a much, much more powerful one), but it would not be a simple feat by any means. In fact, "turbos" like the one you have posted in the picture are little more than a fan and will likely slightly reduce wheel horsepower by drawing more power from the alternator and not giving a significant increase in power in return.

Not the answer you're looking for? Browse other questions tagged engine motorcycle engine-theory super-charger or ask your own question.