One of my two pre-cat O2 sensors is faulty. The garage I put the car in did not manage to replace it - they told me it is stubborn and that even after applying heat (acetylene burner) it did not come off. They were able to turn it only a bit and than it stopped.

They did not want to apply brute force as the thread in the exhaust manifold could be stripped.

I believe they were kind of in a hurry (I asked them to replace the sensor after finishing a long list of jobs and they already had other cars ordered in), so they may have not applied any kind of penetrating oil.

My question is - am I in a danger of stripping the manifold thread if I apply extensive force on the sensor (provided that I won't strip the sensor's hex head)?

EDIT 2017-10-08: After a day of spraying the O2 sensor with WD-40 Specialist Penetrant, I set myself to remove the sensor. Took me about an hour of slow work with 22 box wrench, vice grip and a hammer (I didn't remove the heatshield). The thread of the old sensor was indeed stripped (well, to be precise, its outside half), so the material must have remained in the exhaust manifold's thread.

Then came the worse part of the job - reviving the thread with a tap. I went really slow and after basically three passes I was able to rotate the tap by hand. Tried inserting the new O2 sensor but when I started to feel the resistance, I removed it and decided to first screw another old O2 sensor into the manifold - for case I damage its thread. I really wasn't sure but had basically nothing to lose so I applied more force and finished screwing the sensor. Ran the engine for a while to test it does not leak. Everything was surprisingly OK so I removed the old sensor and now only had to put the new one in. After couple of minutes, voilà, it was there :)

If they told you the truth and unsuccessfully tried an acetylene burner:

Well, yes: What does not get loose with such measures will (most likely) damage the thread (if that not already happened) if you force the sensor out.

I personally would go that path:

Should you not feel confident enough to repair the thread: There are matching weld-on rings available. A good repair/machine shop should be able to fix that.

I don't want to hijack the answer from Myself, but I do want to submit a photo. I recently had to work on a stuck Heated Exhaust Gas Oxygen (HEGO) sensor. I had been attempting to use a friends Snap On branded adapter (basically a large socket with a slot in it for the wiring) and I just couldn't get the tool to fit easily. The socket was just too long. I tried using a variety of wrenches and crows foot adapters. Nothing would work. I ended up borrowing one of these from the Autozone free tool loaner program. (Autozone has a program in many places that essentially sell you the tool, then give you a FULL refund if you return it within 60 days...Great program for tools you use once every three years...)

This tool was way awesome. You could easily apply a whole lot of torque on the sensor. It was beefy and well built. 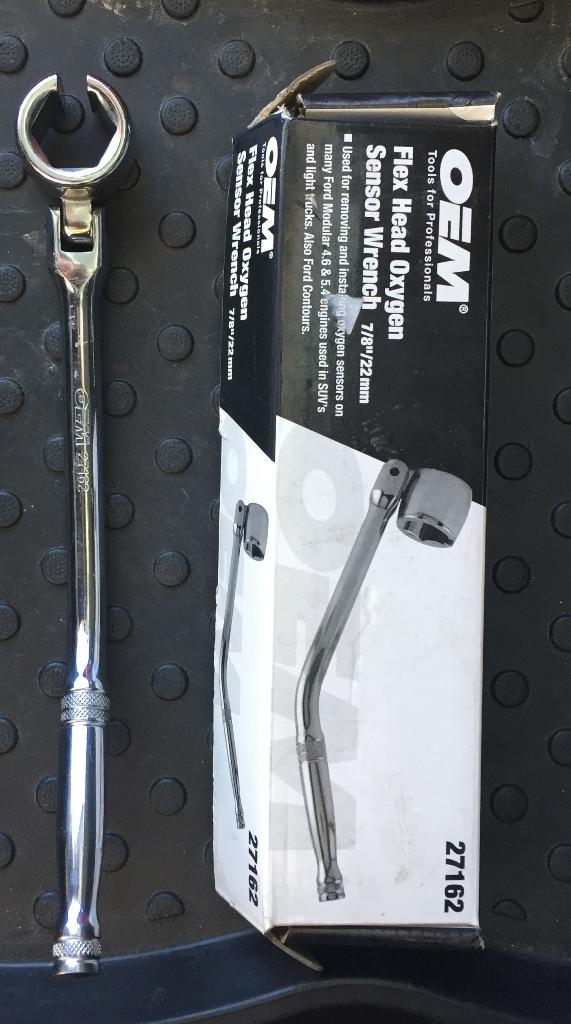 I own a 4 cylinder 2003 Camry. I needed to change the oxygen sensor on it.

I first removed the heat shield. The two halves are held on by screws. The top half removes easily. The bottom half as well except it has a hole in it where the wire for the oxygen sensor connects. If you look on You Tube there are several videos as to where the wire to the oxygen sensor connects. Once you disconnect the wire you can feed it through the hole in the bottom half of the heat shield.

I didn't spray the oxygen sensor but the shallow "well it sits in with PB Blaster. I took a deep socket of proper size and slipped it over the oxygen sensor and tapped it as instructed. (Don't hit it too hard) and waited.

It took three or four applications and some time before it became loose. Sometimes you can try to turn the oxygen sensor (or any tight bolt for that matter) as if you were tightening it. Don't use too much force. Sometimes that little turn the other way will "break" the rust free.

Not the answer you're looking for? Browse other questions tagged toyota o2-sensor lambda or ask your own question.