The rear window on the Highlander lifts up like a hatch back. Toyota bungled the design of the brackets that hold the pneumatic assist onto the window. Basically the brackets attach to the window with a single bolt and rotation is limited using double sided tape. Unfortunately the attachment point is offset from the bolt hole so it causes a constant force trying to rotate that bracket. The tape gives out and the bracket moves. 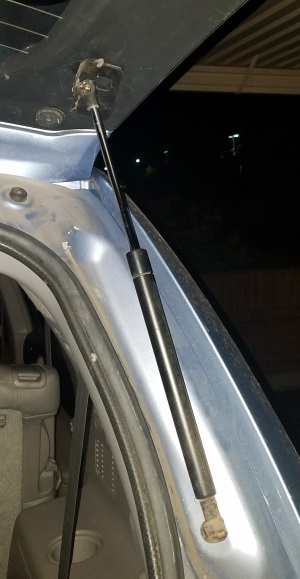 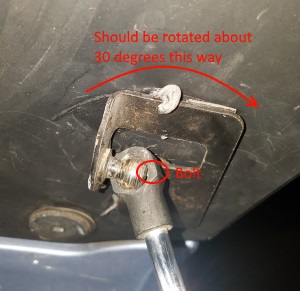 I find myself wishing that someone made an aftermarket bracket that would put the stress inline with the bolt hole, preferably higher on the window than the bolt hole so it would naturally stay lined up. I've done some searching and had trouble finding anything. Most searches result in replacement parts for the whole rear hatch, not just the window. Know of any clever ways someone else has solved this problem?

Unless I can find a better option, my current plan is to buy some of the nearly indestructible double sided tape from 3M and use it to attach those brackets. Unfortunately the bracket have bent due to years of stress and I'm not 100% sure what shape they used to be in. I can approximate what it seems like they should be but I might need to buy replacement brackets to make sure they are right.

Update: Looking at the pictures I start to wonder if maybe that bracket could be rotated 150 degrees to put the ball on the outside of the window. That would put the ball above the bolt so it would be somewhat less likely to rotate. However, I think I might have tried that before and perhaps it wouldn't align with the groove in the lift gate. moving that lift point up would also reduce the leverage on the window and it might not hold the window up in that position.

Browse other questions tagged toyota window highlander or ask your own question.