Can pressure caused by temperature cause ignition coils to unseat?

I've got a Rotax engine that looks like this from the top: 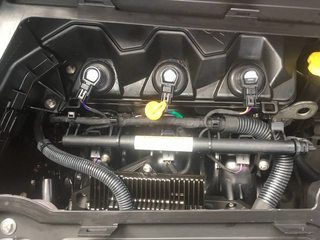 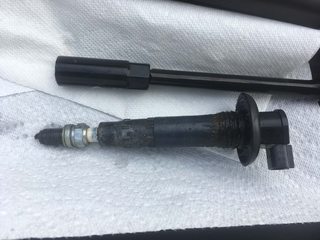 Recently two of the three ignition coils unseated after approximately 10 minutes of operation under load at about 7000 RPM. It is unclear to me how this happened. The spark plugs were torqued to 119lbf-in (per manufacturer) 5 operating hours prior and were still tight after this occurred.

All components have operated 22 hours since they left the factory.

The engine was winterized at 17 hours per manufacturer's procedure. That procedure includes applying lubricant that seems to completely seal the ignition coil against the cylinder head.

Winterization was performed at a temperature of approximately 12C (53F). I'm not sure what the engine temperature was at the time of the unseating. The cooling system has a monitor that sounds an alarm at 110C (230F). That alarm did not sound.

I'm not sure how to interpret that number. I don't have a good way to test whether 7.5lbf would be enough pulling force to unseat the coils.

As best I can tell the unseating of the ignition coils was resolved by not replacing the spark plugs. Re-torquing alone did not resolve the problem. It seems that once the metal gasket is crushed by the first installation it will not make a good seal on the second installation. In other words, these spark plugs (or at least their gasket) should be replaced every time they are removed.

4
Should I use lubricant or not when installing these spark plugs?

6
Can Getting Fuel Injectors or Ignition Coils Wet Ruin Them?
5
Engine not starting after melted Ignition Coil
2
What creates resistance in ignition coils?
3
Diagnosing a boat that wont start
1
What would cause repeated failure of ignition coils?
2
After mechanic work, car starts fine but accelerating stalls the engine
0
2009 Ford Escape Hybrid - Ignition Coils and Spark Plug Replacement
0
Ignition coil replacement
1
Cylinder misfires since having a full service on Golf MK5 2005
5
Can swapping ignition coils fix a cylinder four misfire?