Can headlights become opaque on the inside?

I've noticed that one of the headlights in my Ford Focus has become opaque. However, this doesn't seem to match with what people call "foggy" or "hazy headlights": not only the fog is not evenly spread (it's more of a "stain"), but it really looks like it is the inside of the lens that got opaque, not the outside.

Some friends suggested that the lamp may not be the right one, and that it gets too hot and burns the plastic. However, I didn't change the lamp myself when it broke, but I had it changed in a shop. Also, the same shop changed the lamp in the other headlight, which is fine instead. Some suggested that maybe when the previous lamp broke it sent out a quick burst of heat which caused the damage.

It is more of a side stain, it doesn't sit in front of the lamp and it doesn't seem to affect the projection of the light, however some people suggested that it might be an issue for the next mandatory inspection (I live in Italy). Anyway, it's a bit ugly, and I would really rather fix that.

Is it possible that the damage is on the inside? If that is the case, do I have any other choice than to replace the headlights?

EDIT Here are a few pictures of the headlight (they're a bit dirty, sorry about that, but the issue is quite visible): 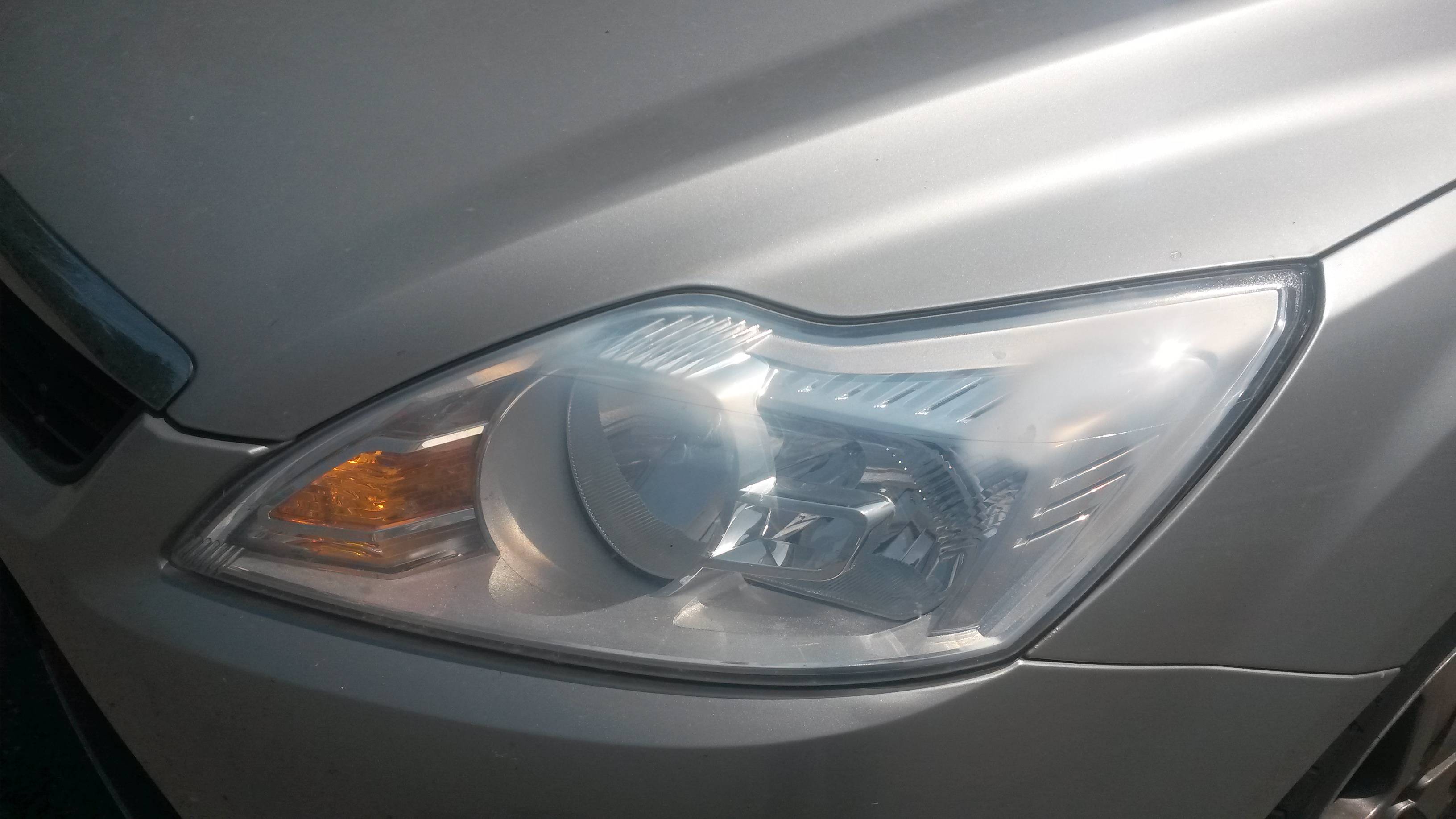 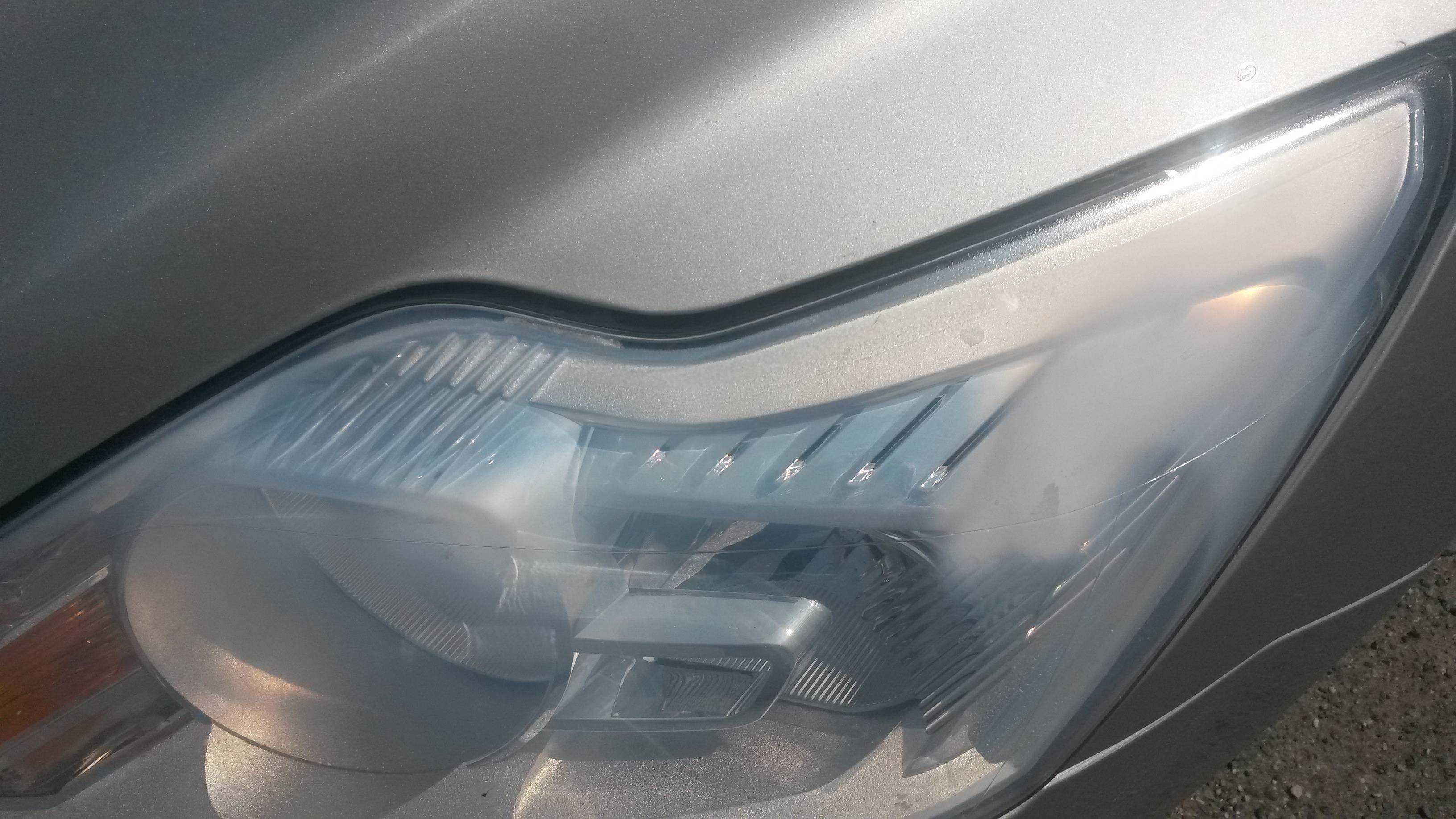 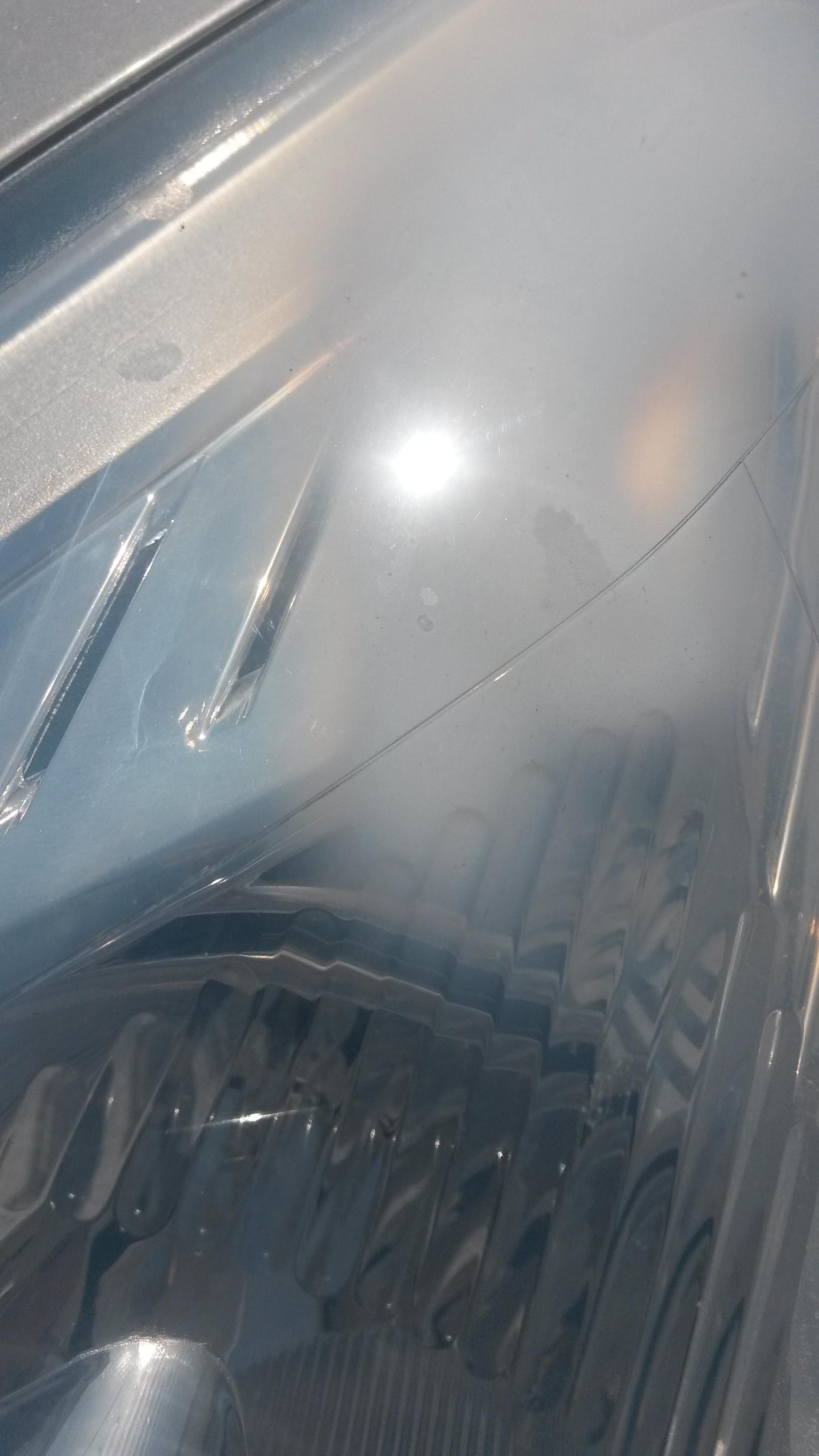 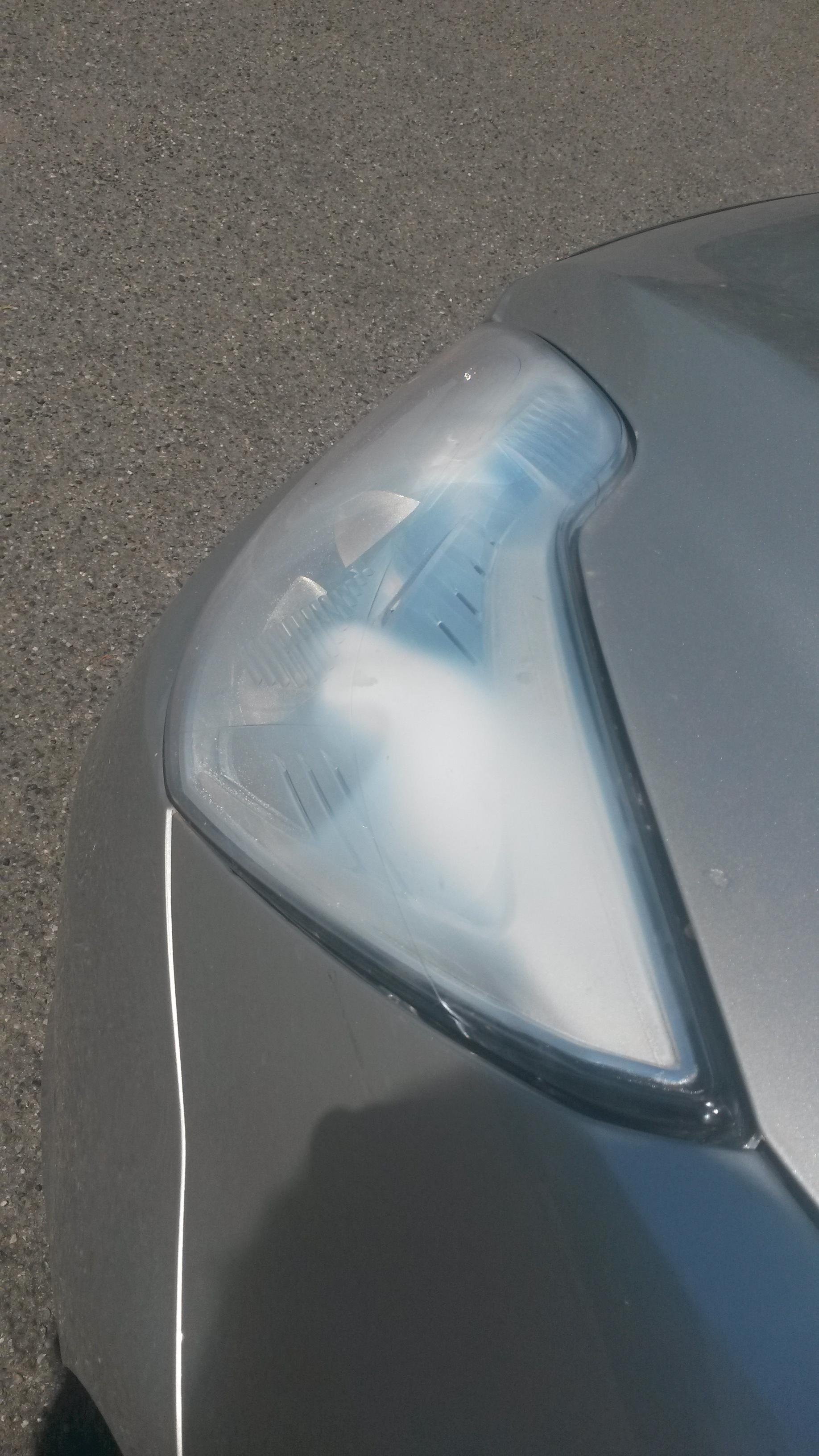 For reference, here is a picture of the other headlight: 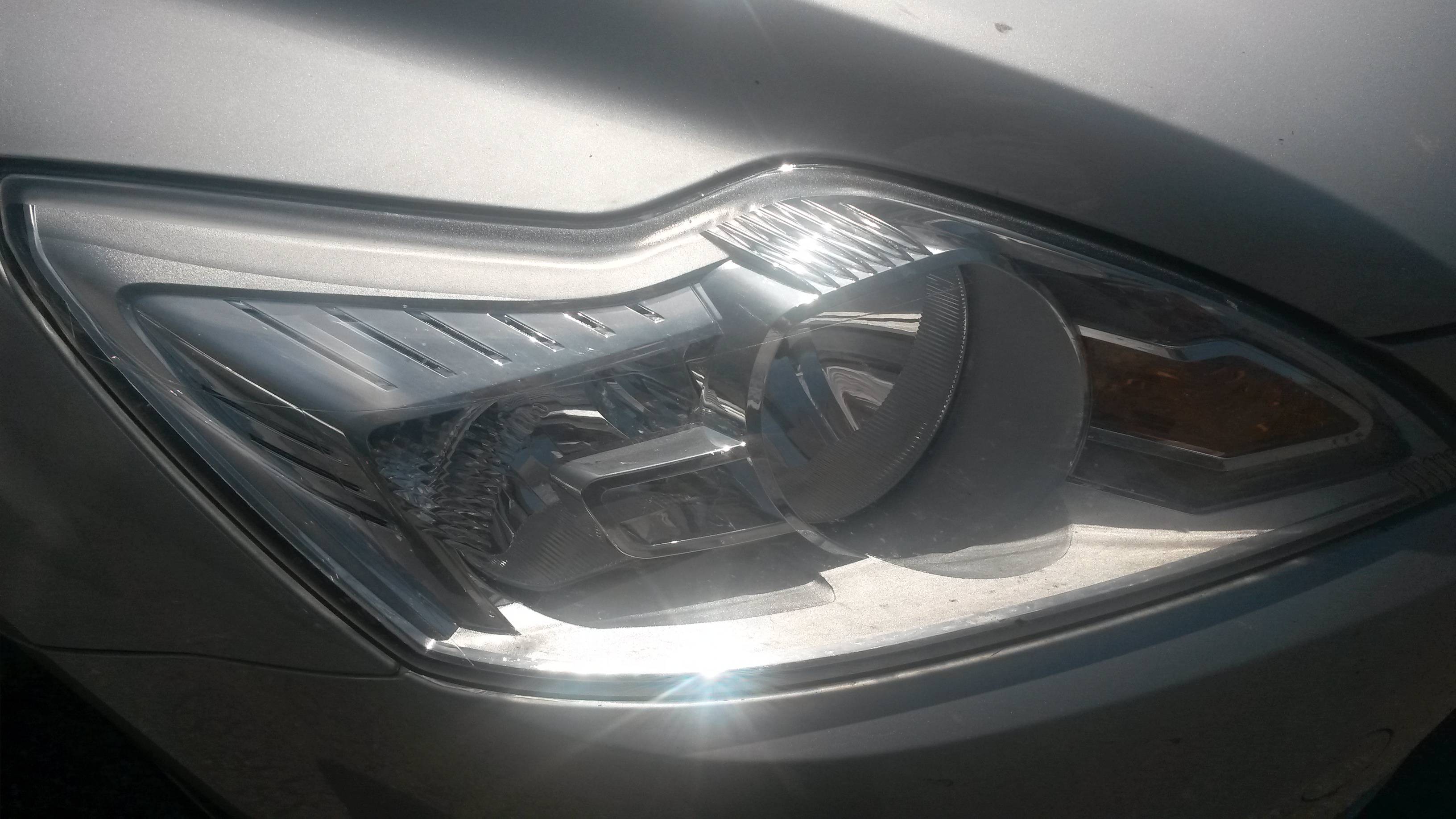 Headlights can quite often suffer from condensation on the inside of the lens unit or protective cover.. Sometime you'll notice this get better in the sun as the heat evaporates the moisture?

As you say the bulb has been changed condensation is possible in the light if the rubber protection boot (at the back of the headlight) has not been replaced properly, as moisture will then get in there and into the light unit itself.

Don't rule out absolute UV damage. I've seen this occur to acrylic when exposed to strong sunlight repeatedly reflected off glass buildings. Ever hear about the car in England that caught fire because of Archimedes Len's effect? It happened to my motorcycle lens just like this one. It's not from the bulb(s), if it's not moisture, it's the plastic. If it's only on the exterior surface, try rubbing a circle with toothpaste and see if it improves. If it improves, get a headlight polishing kit. And park differently. Cheers!

Not the answer you're looking for? Browse other questions tagged headlight or ask your own question.

4
Headlights turning off randomly
9
Realistically, how much can I expect to improve cloudy headlights by polishing?
4
Collision repair with Bondo and used parts
5
Should I clearcoat my headlights after sanding and polishing them?
1
2008 Toyota highlander blows a headlight every 3 months
12
Car won't start, horn won't honk, headlights won't come on, what could cause this?
0
Flickering headlight
1
What's up with my headlights? One appears brighter, from inside only
2
Troubleshooting dim HID headlights