I have a 2007 Mustang V6 that leaks freon slowly. I can charge it fully, and within 5 days it's nearly gone.

I've used an electronic leak detector, and no component seems to be showing a leak, except the schrader valves - with the high side seemingly leaking a lot more than the low side. I've put it around the compressor and even in the air vents but the only place it beeps more is around those schrader valves.

So I evacuated the system and attempted to replace the valves. Both were so tightly frozen that I could not unscrew them. I pushed them in and out and vacuumed the area around them from debris.

I pulled a vacuum on the system and it went right on down to the place near negative 30 inches and stayed there for 30 minutes. Then I left it for 20 minutes and the vacuum held. So I closed off and removed the high side hose, leaving that hose off, I turned off the pump again. After 20 minutes there was no vacuum loss at all. I put the hose back on the high side, kept the vacuum and there was no vacuum loss with the low side off of the hoses.

So I put both hoses on, pulled a vacuum for another half hour and recharged the system. 5 days later, I put the gauges back on and the system appears to be slowly getting low on freon again.

Any suggestions? Take it to a shop and let them replace the shraders for good? It looks like the low side schrader is part of the receiver/dryer so I guess replacing that would work for that one. But the high side is part of what looks to be an expensive hose. Should I just replace it anyway and try it all again?

Replace the caps on the both (high pressure / low pressure) ports of the Air Conditioning (A/C) system. Those caps are a primary seal. Let me repeat that. Those caps provide a PRIMARY SEAL. Replace the caps immediately. You should ensure that there is functional rubber seal inside the cap, and that the cap has no cracks in it.

I have seen cars where the small rubber gasket inside the Schraeder valve gets twisted and doesn't seal well. Those seals are square cut, and if they rotate, they won't seal well. If you want you can replace those valves, too. You can do that IN ADDITION to replacing the plastic caps. 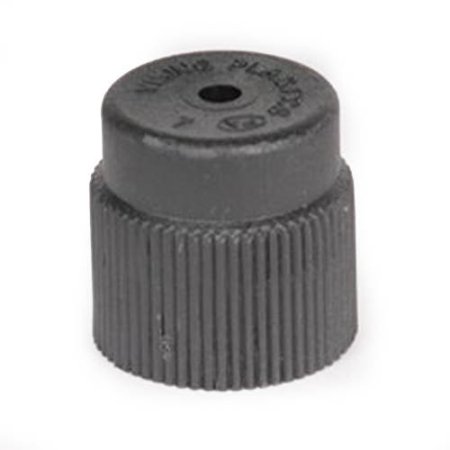 A couple of tips:
--A leak that empties the system in five days is a pretty large leak.

--Electronic leak detectors were not my favorite tool. Plenty of opportunities for things to go awry. False indication, no indication, etc..

--I'd much prefer a propane/butane style of detector or using the dye in the refrigerant system. I will say on an older car, generally when there is a refrigerant leak, you will see (and smell) compressor oil. That stuff smells nasty. The dye with glasses and UV light leave a pretty good indication of where the leaks are occurring.

--Its possible to have a leak in the evaporator core inside the instrument panel. You could possible use your leak detector on the outlet from the panel vents to determine it that is your issue.

--And if the system still leaks after you put new caps on, the most likely place for leaks are: 1) at moving parts (i.e. the crankshaft seal at the A/C compressor) 2) at the condenser (in front of the radiator) generally from rock hits 3) at any joint (possible corrosion at the internal O-rings)

Has this car been involved in a front end accident? That could change the look/see procedure...

Not the answer you're looking for? Browse other questions tagged ford ac leak or ask your own question.