A quick recap. My coolant tends to overflow my expansion reservoir. I've flushed the cooling system and got quite a bit sediment out, some of which was rust and bit's of metal, some of which was black aluminum oxide. I've replaced the water pump because all it's fins rusted off and even pulled one of those fins out of the block's main water passage.

What I've noticed is that if I turn on the A/C I don't have this problem. I just took a three day trip through the mountains and didn't loose a drop of coolant because I was running the A/C the whole time.

So I hooked it up to ForScan to gather some data. The lines are RPM's, Temp and Fan On / Off ( X axis is time in seconds ): 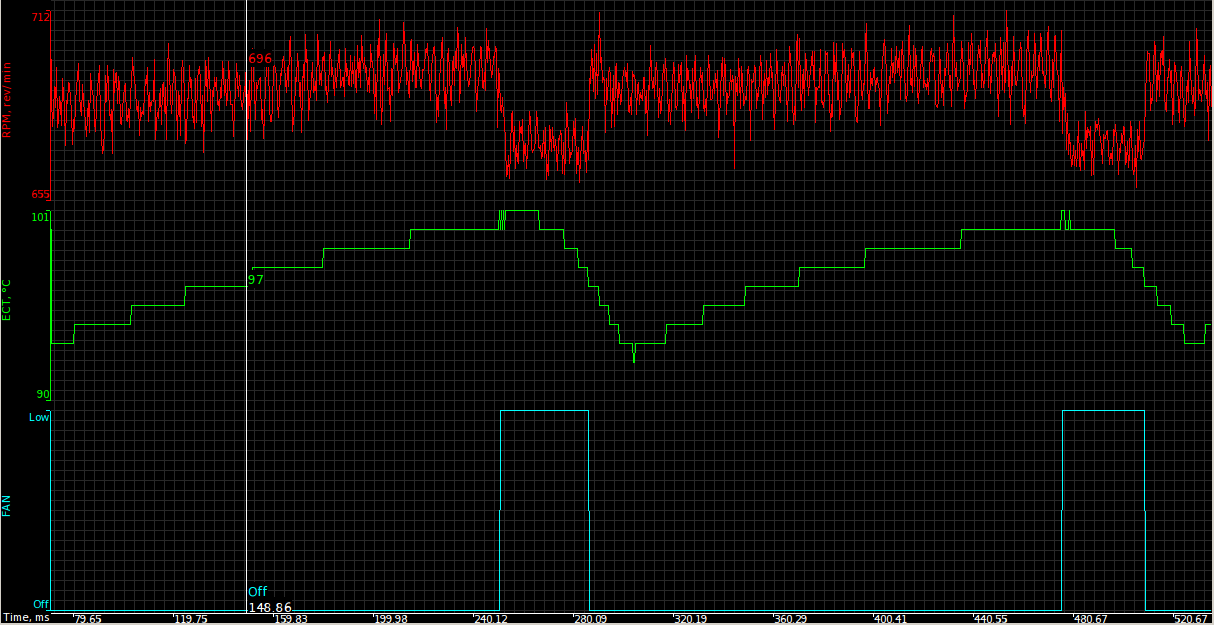 The fan is on for about 35 seconds each time, and about 190 seconds passes before it comes on again.

Now as to why this is all happening. I can think of a few possibilities.

Two side notes. I'm currently running distilled water, but it was also happening with the green Prestone coolant which is rated up to 126C*.

The dash temperature gauge has gone wonky recently and is usually pegged low or bouncing around randomly, even while the ECU reports a steady, normal temperature.

As a reminder, this doesn't happen when the A/C is on.

So it was in fact the radiator cap. Thanks to zipzit and SolarMike for their great answers!

Here's a new graph with the new radiator cap installed: 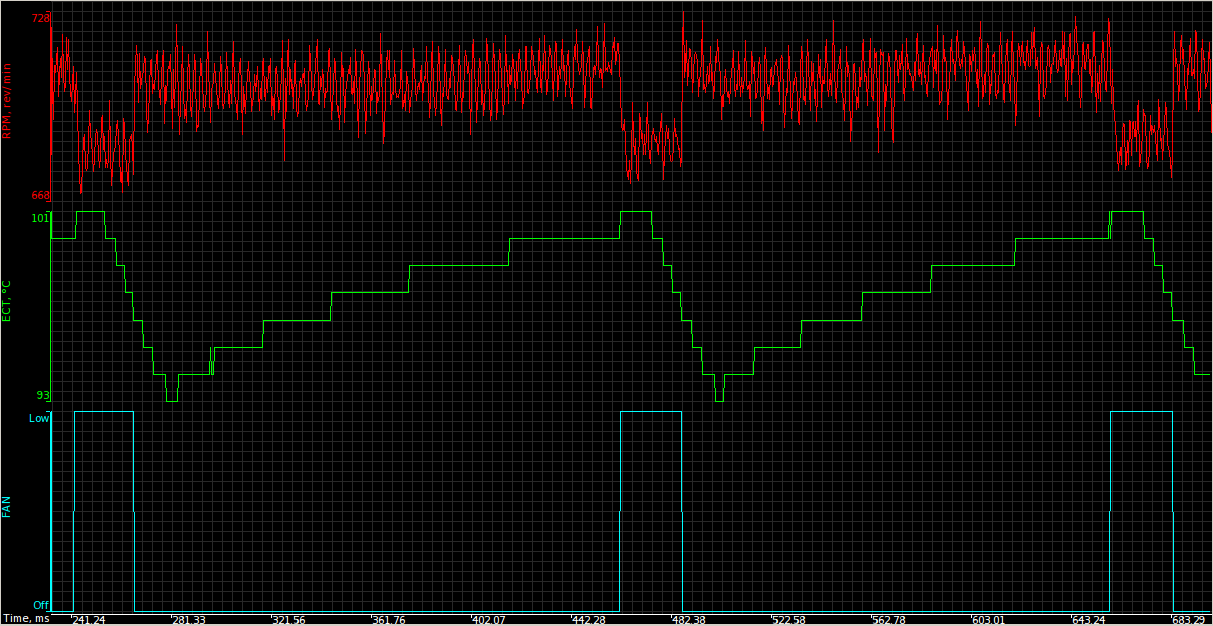 Even when the temperature hits 101C* there is no evidence of any movement at all in the expansion container. Also, some other things have changed. The fan stays on for only 24 seconds and 195 seconds pass before it comes back on, which is about a 1:8 On/Off ratio now. And it only takes 13 seconds after fan shutoff for the temperature to get down to 93C*.

My guess is bad radiator cap. The cap has two sealing systems. One that holds high pressure (13 to 15 psi). Water at 13 psi doesn't boil until 245 Deg F it so. The other sealing system is the overflow return. As the engine cools down this allows coolant from the overflow to return to the radiator. My guess is that little valve is stuck open.

I'm also guessing you are located at a high altitude causing you to boil off coolant well below 212 Deg F. ( boiling point of water at sea level)

Edit. At 900 meters of elevation the boiling point of water is 206.2 Deg F / 96.2 Deg C. That's in the normal temp range for your engine. So yes replace cap immediately.

You can probably see the defect in the radiator cap visually. Do note: The way that works is after vehicle cool down, a slight vacuum is formed in the cooling system. That vacuum "sucks" extra coolant out of the overflow bottle. Note: While it takes 15 or 20 minutes to heat up the cooling system, it takes a LONG time for this cool down vacuum return thing to work, generally eight to ten HOURS after vehicle shutoff. 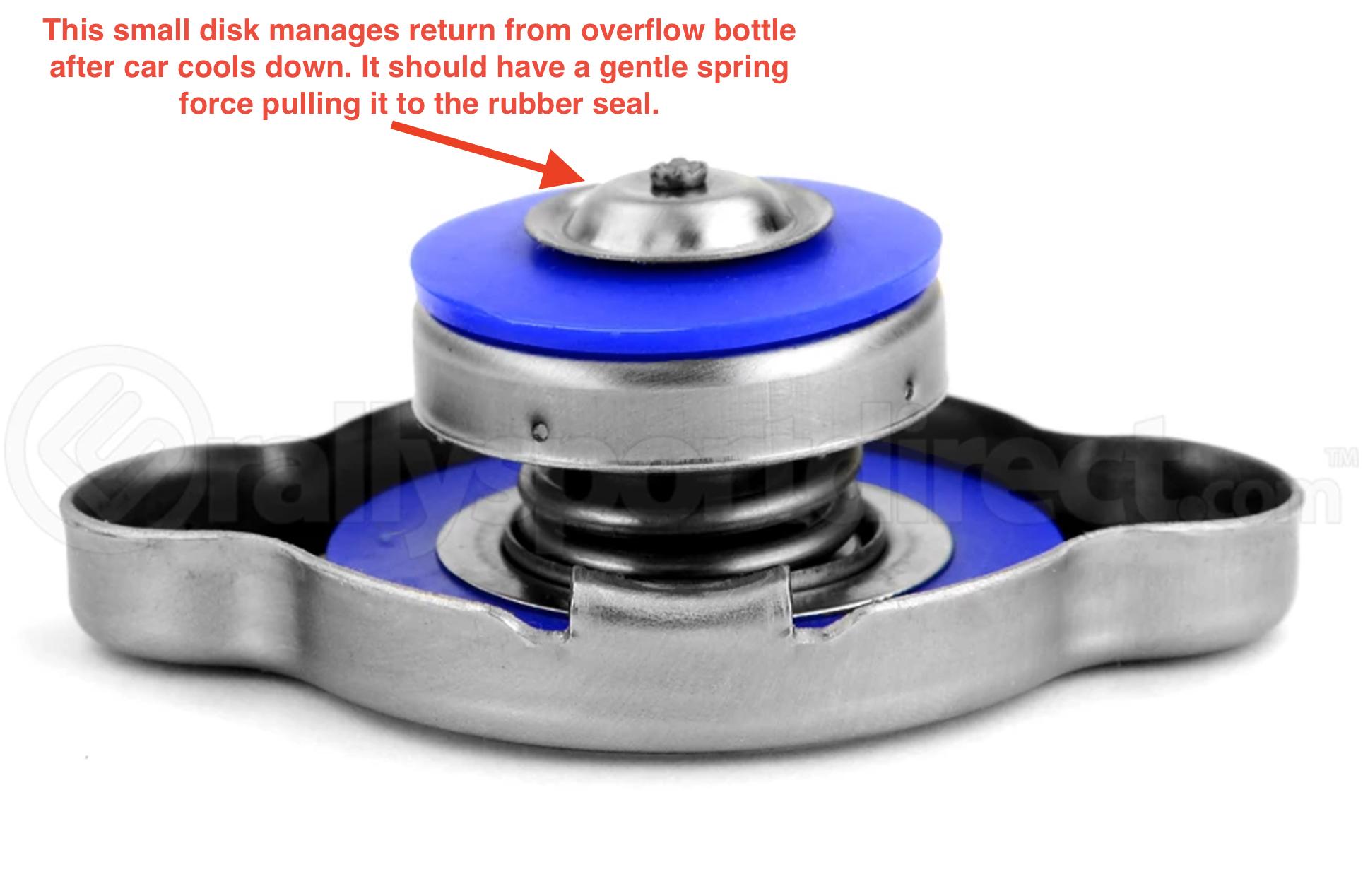 Not the answer you're looking for? Browse other questions tagged cooling-system mazda-626 or ask your own question.