Oil in coolant recovery tank, how urgent is it?

I was going to loan my car to a friend tomorrow, and checked the oil and tire pressure etc earlier this week, but couldn't see the coolant level, so I just went to double-check it with a drinking straw, and pulled out black goop floating on the coolant. A little deeper is clean coolant, and the coolant in the top of the radiator is clean. The oil level is normal and doesn't seem frothy. I did recently get a pending check engine code P1??? for the coolant temperature not being high enough? But most of the time I'm driving it's in exactly the middle where it's supposed to be, never goes over.

Radiator was replaced over a year ago because the fan thermostat was broken and it was overheating when I stopped moving, and bursted the radiator plastic. I don't think the coolant level has changed since then.

I don't know if this is fresh oil or it's been in the tank for years. I think that part of the coolant tank has been dark for a long time, but it's hard to remember. How do I judge the urgency of this? Is it ok for my friend to drive it 200 miles? :/

Drove it around for a few miles, temperature was perfect, no smoke in exhaust, no milkiness in dipstick or oil fill hole. Under a blacklight, the little oil puddles in the oil fill hole might be fluorescing green? Or it could be my imagination, it's really hard to tell.

Last oil change and inspection was 4 months ago.

My friend drove the car for ~400 miles and nothing major happened. I checked the coolant again today, added a little water so it came up to the top, and it doesn't look so bad, just a few drops: 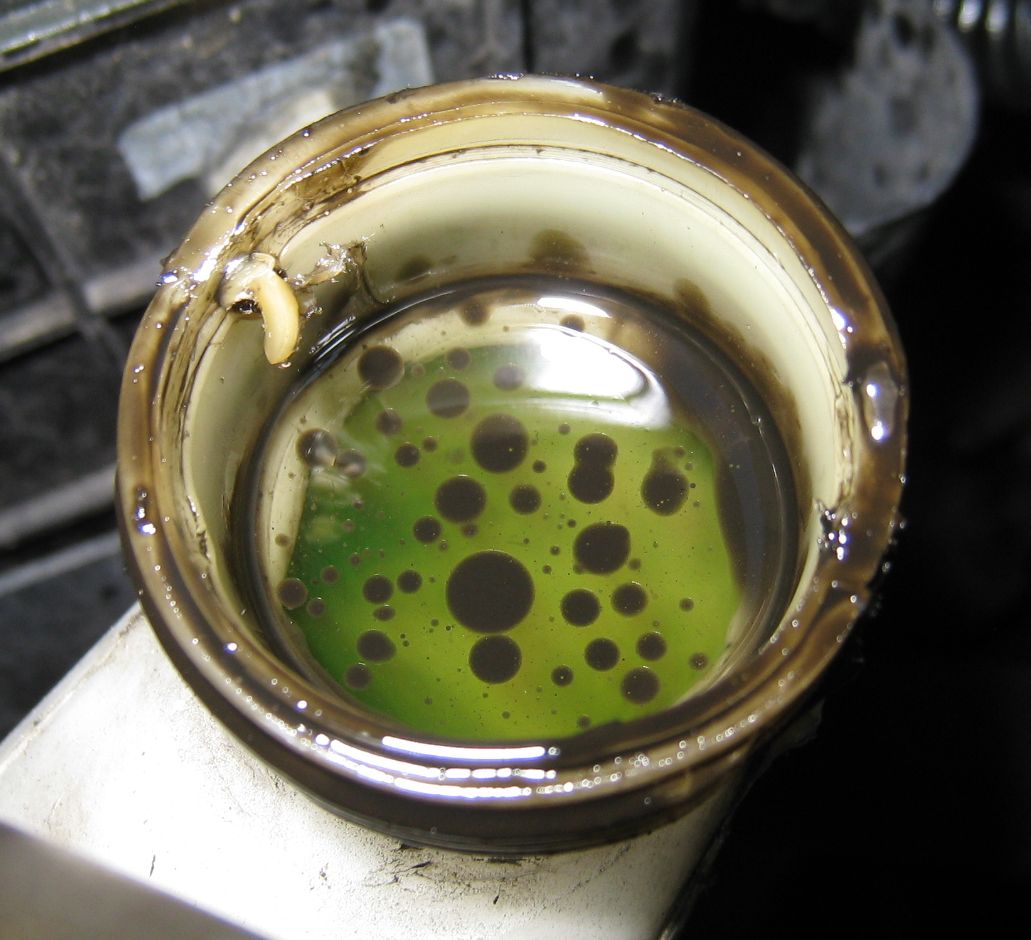 But when I stuck a straw down there the other day, it came back with an inch of black goop covering it, and I see black spill marks on and around the recovery tank, so I think it overflowed the cap and pushed the layer of oil out: 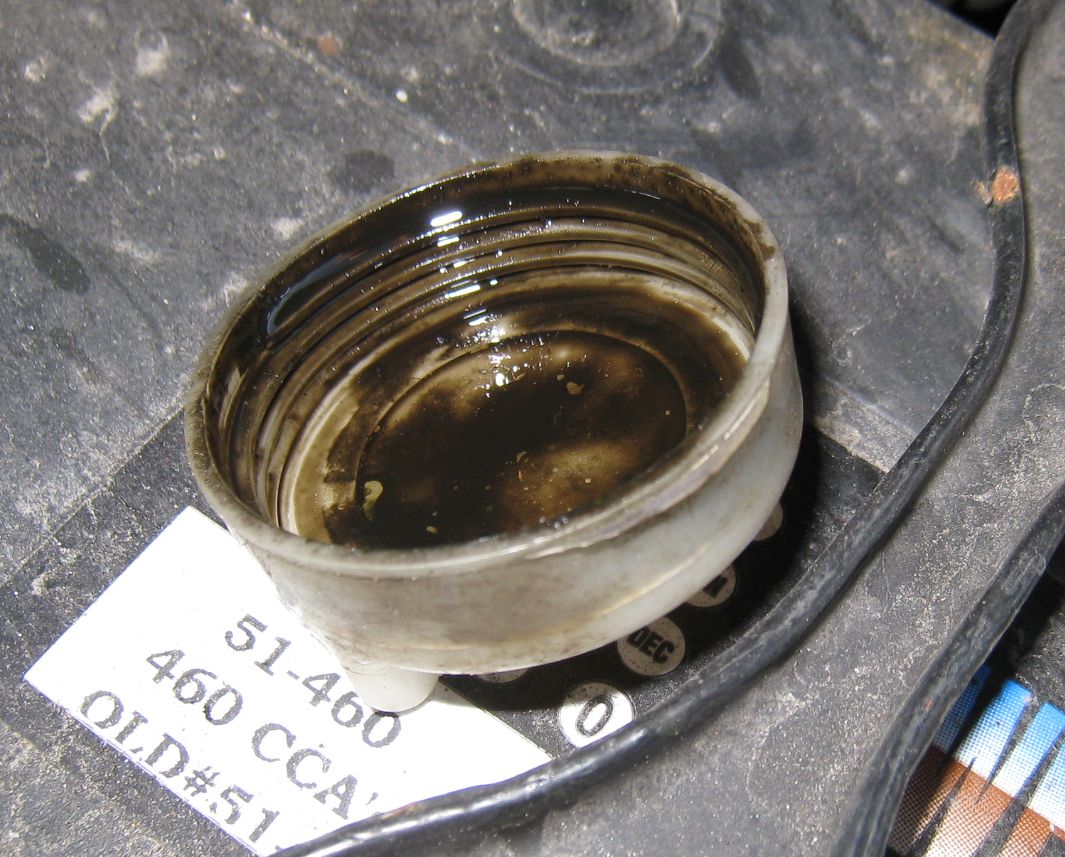 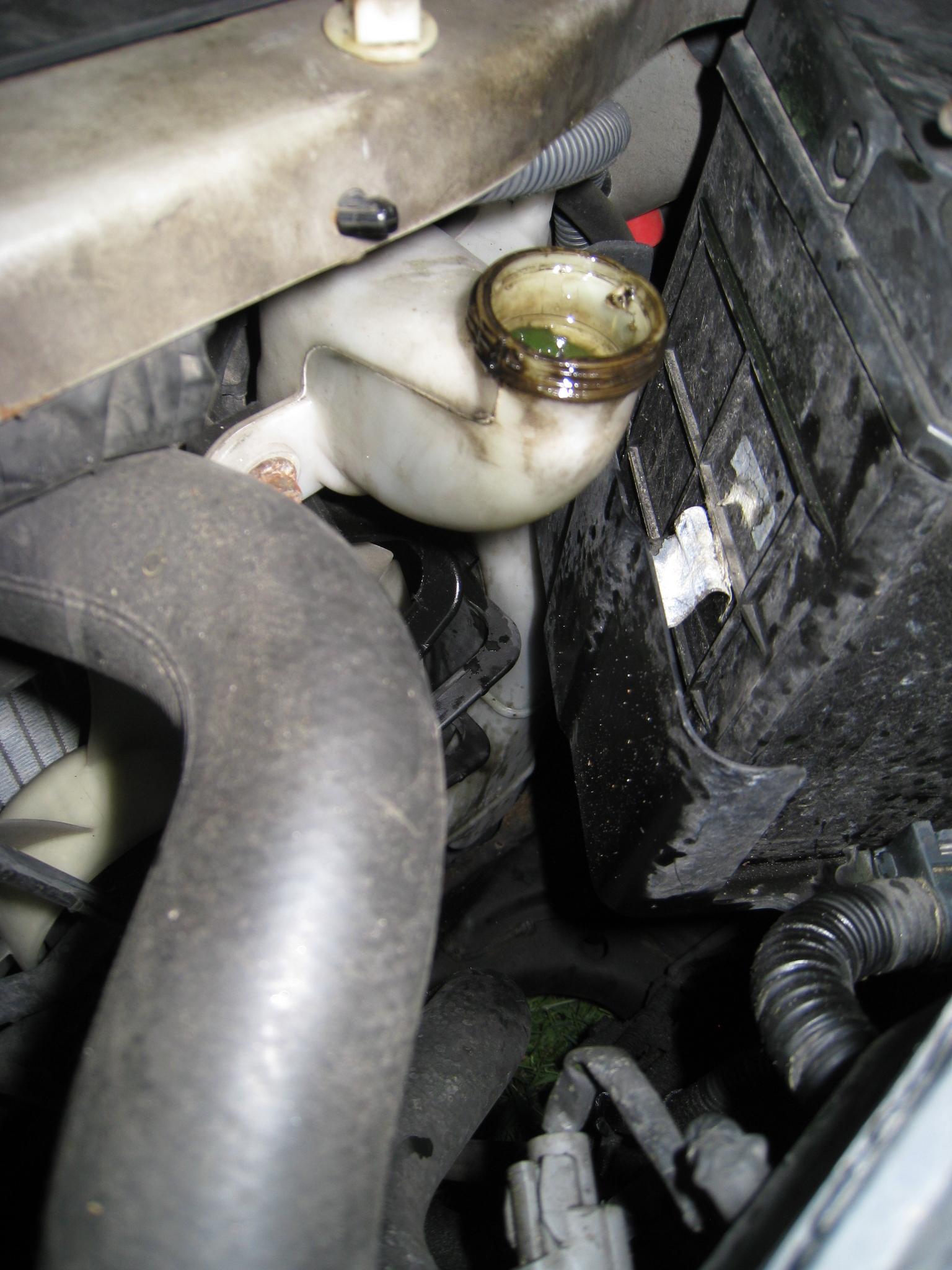 I know from previous head gasket experience that the coolant tank overflowing can be a bad sign.

The coolant tank has been overfull since they replaced the radiator last year, though, and I may have overfilled it previously, too, since the tank is almost impossible to see through.

Still no smoke in the exhaust or chocolate milk in the engine, at least. Could it be a one-way leak?

I checked the oil fill hole with the blacklight again, and was dismayed to see that the oil definitely had a greenish fluorescent tinge. Then I checked the bottle of fresh clean oil, and it fluoresces green too! Weird! So, that's pleasantly meaningless.

If the car isn't overheating and you're not seeing chocolate milk instead of oil, plus no oil floating at the top of the radiator (under the radiator cap), I'd suggest this is something which is a non-emergency.

What you need to do is clean the overflow container so it is completely clean. Soap and water should do the trick. When it's clean, you'll be able to tell if the black goo is coming back or not, plus you might be able to tell better where it's coming from. Once the container is cleaned, you'll want to continue to check it on a regular basis, more often at first (once a day), then as time goes on, probably once a week, then per month if you don't find it coming back. If it does come back, a picture of what it looks like would be a big help in the diagnosis.

Not the answer you're looking for? Browse other questions tagged honda coolant oil-leak head-gasket or ask your own question.