I just replaced the struts on my vehicle from a pair I brought from the junkyard and went in for an alignment, the shop then told me that my left wheel has 2"30 degrees of camber and the only way to fix this issue is by "opening" (translated from arabic) the strut, not quite sure what that means. Now I have had the exact same issue with the old struts before and the camber was fixed by doing that. They also told me at first that they thought the issue was with the used struts but after remembering that the car had the same issue with the old struts the problem seem to be with the car itself.

Now my questions are, what is causing this excessive camber on the left wheel? Is the only way to fix it is by "opening" the strut? and what exactly is that?

I have no idea what "opening" the strut means.

In your vehicle the strut mounts to the knuckle with two big bolts. When these bolts are loose there is some wiggle room. This wiggle room is how camber is adjusted in your car.

If the wiggle room is not enough (assuming nothing is damaged) you have two options. The bolt holes can be oblonged by grinding. This will give you more wiggle room. The other option (better option) is to get a special bolt that has a built in eccentric. This gives more adjustment and allows the adjustment to be more easily controlled. You will have to figure out what bolts are available for your car. 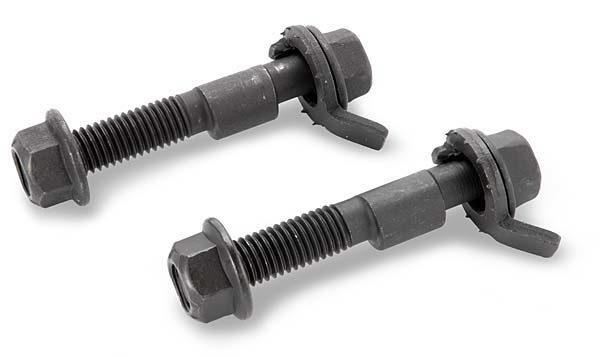 Not the answer you're looking for? Browse other questions tagged chevrolet suspension alignment aveo camber or ask your own question.

4
What can be done about noisy spring seats?
4
Front wheels have different camber after suspension replacement
4
Wheel Positioning - Camber and Toe
8
How do I get the sway bar link to line up with new strut and spring?
5
Are rear rigid axles repairable? If so, how?
4
Clunking/grating sound coming from front right when turning left at speed
1
Adjusting excessive camber by bending the rotor assembly?
2
When should I get an alignment after strut and coil replacement?