Installing a lower strut brace: What will happen when I remove the bolts connecting the control arms?

I want to install a lower strut brace on my Mk1 Golf/Rabbit. The strut bar connects between the 2 control arms, like this: 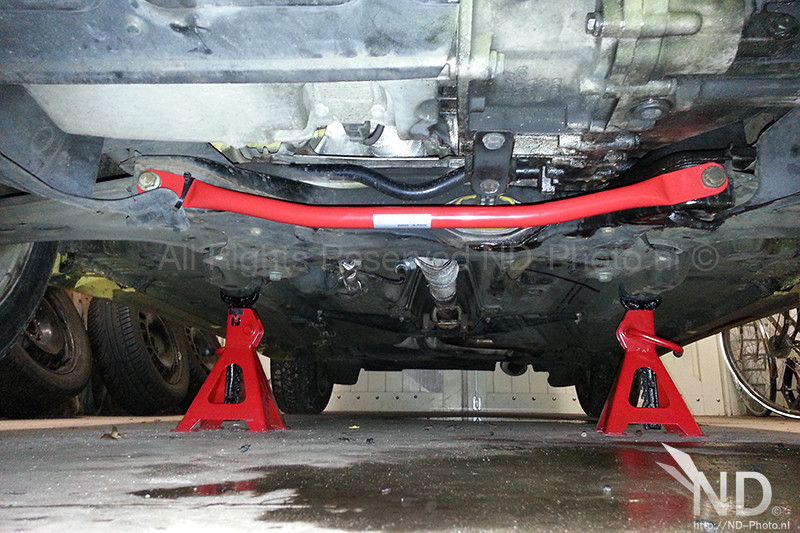 I need to remove the (one of the) bolts holding in the control arms. I've got the car up on stands and was about to start when I got concerned: What will happen when I remove this? Will the wheel drop down? Will I need to support the wheel on something? How will I realign the bolt back through the hole?

Is there some technique to doing this? Any help is appreciated!

You shouldn't have an issue removing the bolt. The suspension shouldn't move on you. There are two reasons for this. First, there is a second mounting point for the A-arm. Back from the bolt, you can see there's a bushing with a bolt through it which goes straight up into the body. This helps locate the A-arm. Secondly, the bushing for the bolt you're going to take out, should have an interference fit on the A-arm itself, which should help hold it in place. If you don't mess with that rear bolt, the A-arm should stay in place without issue.

When you remove the bolt, the A-arm will most likely not move at all. If it does move any, you can use a screwdriver or thin prybar to move it back into position. Insert it into the end opposite of where you putting the bolt into to help you align the A-arm hole to the mounting hole. Really, though, I doubt it's going to move at all.

Something you may want to do is to put your jack under the ball joint near the steering knuckle near the tire. Jack it up just enough to start applying weight to the suspension, but not much further. Do not move the suspension after you have the bolt out, as this could cause it to un-align (if that's a word) with the mounting hole. Only do one side at a time. Also, leave the bolt snug, but loose, until you can get the car back on the ground. You want to tighten this when there is complete load on the suspension or you'll be binding the bushing. If you tighten it while it's in the air, you'll wear this bushing out well before its time.

Not the answer you're looking for? Browse other questions tagged suspension steering golf struts or ask your own question.

1
Mk1 VW Golf/Rabbit - Engine idle fluctuates at random times
1
turn-sensitive road noise
8
How do I get the sway bar link to line up with new strut and spring?
4
Body kit attached with some kind of rubbery adhesive. Anyway to detach it safely?
7
Car pulls to the side when driving or braking on a bumpy road
7
Can wheels become unaligned after replacing struts?
2
Creaking when braking after recent service
1
Banging noise Over bumps. But suspensions are okay