My 2001 Ford Ranger 4.0L 4x4 has a 6' bed that has lost a lot of its paint and is rusting in spots. I was thinking this would be a great impetus to abrade the surface and throw some Herculiner on it. The hardware in the bed is extremely rusty, so I'm wondering if it makes sense to pull the various bolts from the main surface of the bed and replace them with stainless equivalents. In the picture below, I'm basically talking about the four large bolts in the bed itself and the eight smaller ones on the tailgate. 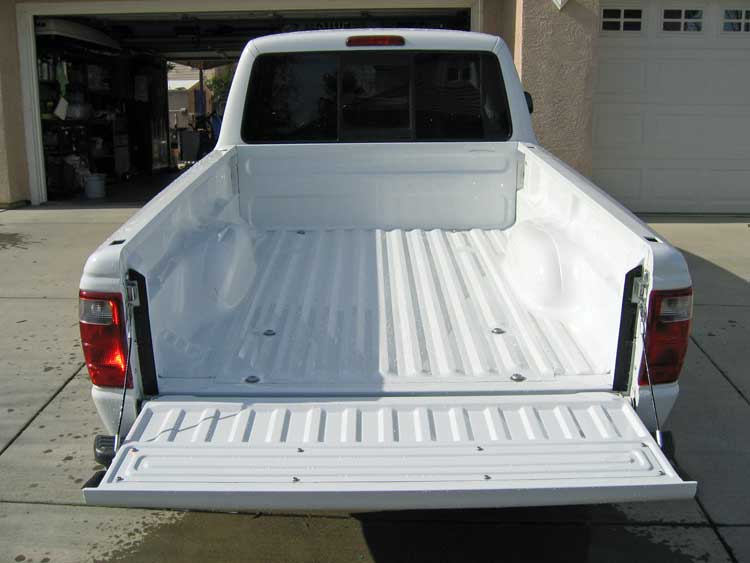 My two concerns are:

The hardware is different depending on where it's at. The four bed bolts will most likely have washers/nuts on the other side, while the eight in the tailgate will have captured nuts of some kind backing them.

The thing you need to ask yourself is: Will I ever need to access these bolts? The answer is most likely yes, at least for the ones on the tailgate. The panel which it holds in place allows you to get the mechanism which operates the tailgate releases. These you'll want to ensure don't get covered in Hurculiner goo so you'll have access to the area after the fact. The ones in the be are less likely to ever be removed. The only time they get removed is if you need to access what's under the bed or in bed replacement. If bed replacement, you'll most likely be replacing the entire vehicle.

My suggestion to you is to remove the eight bolts in the tailgate and leave the ones in the bed alone. Don't replace your hardware in either case. If you do go this route, ensure you cover the holes with some sort of plug OR just remove the panel all together and put the liner on it separately. You'd need to cover the larger hole some how, but I think there are provisions in the directions for doing this correctly.