There are 2 cars, car A and car B.
Car B is 20% heavier than car A.
We all know that this means that these 2 cars will have same power if car B at the same RPM (revolution) has 20% more Nm.

Can the torque be mathematically equated?

If I did not write this clearly, please ask me to clarify. This data is very important to me and I was unable to find this info on the Net.

I believe you are confusing torque (TQ) and horsepower (HP) terms here. HP is a mathematical computation based on TQ. You can derive a HP number by increasing the rotational speed up/down depending on what you want to achieve. Weight of a vehicle will have no affect on either. As mentioned in the comments, TQ output (at the wheels) is greatly affected by tire size, transmission gearing, axle ratio, and frictional losses. Because TQ output is affected by these, so is HP.

To figure out what HP is, you use the following equation:

Since we are talking about vehicles, we need to modify a couple of things here to get to HP. When using other units or if the speed is in revolutions per unit time rather than radians, a conversion factor has to be included. When torque is in pound-foot units, rotational speed is in rpm and power is required in horsepower, we change the equation to look like this:

Let's throw some numbers into the equation and see how HP is affected by different factors. For this example, we will use the following:

What happens when you increase the RPM?

This assumes the torque value has maintained the same level (300 ft lbs), yet the HP has increased by over 100HP. Remember that HP is a measure of work over time. The work is the TQ, while the time period is the RPM. As you increase speed of an engine, the work being accomplished increases as well. Conversely, if we increase TQ at a given RPM range, we will also see a corresponding increase in HP.

As shown, as TQ increases at a given speed, so does HP, meaning that the amount of work has also increased, but the the speed within which it occurs is the same.

It is interesting to note, that due to the constant of 5252, if you look at a graph of TQ and HP output, you will notice the two will be equal at 5252 RPM. If you see a graph depicting the HP/TQ outputs of an engine which do not cross at this point, you know it is a bogus chart (which happens more often than you'd think).

How is torque affected by things as I mentioned above? If you put an engine on a stand and attach it to an engine dynamometer, you would be measuring the output at 1:1. What the engine puts out is what you get. No mechanical or mathematical gimmickry going on here. If, however, we put the vehicle on a roller or chassis dynamometer, there is a lot of other factors going one which affects the outcome. First modifier is the transmission.

A recent transmission introduced to the automotive is the T-56 Magnum, produced by Tremec. The gear ratios for this transmission are as follows:

The purpose of the transmission is to give a vehicle more TQ output by using mechanical advantage. If we were to measure TQ output at the back of the transmission, you'd expect to take the input TQ coming from the engine and multiply it by the gear ration of the first gear. How it works, as you multiply the speed of the shaft, you decrease the torque output. The converse is true as well. In the case of the first gear, given an engine speed (input) of 3000 RPM and TQ of 300 ft-lbs, the output is modified to ~1128 RPM and your TQ has climbed to 798 ft-lbs. Remember, this is a generalization, as there is a modification for frictional losses, which occurs due to drag from the bearings, bushing, seals, and to a certain extent by pushing tranny fluid around (tranny fluid actually reduces a lot of drag from the bearings and bushing, though, so a whole different dynamic).

The next modifier is the rear differential. Let's use a rear differential ratio of 3.50:1 (this is not a real world ratio as I know it, just using the number to make things easier). Our output of 1128RPM and 798 ft-lbs, now becomes ~322RPM and 2793 ft-lbs, respectively. Mind you, all of this assumes that the entire drive train is spinning, as in the clutch is engaged and fully gripping.

The only modifier we have left, is the tire height. Because the tire/wheel is directly attached to the axle shaft, there is a 1:1 ratio there, which means the RPM will not change. What does change is the applied TQ. TQ is a twisting force. If you think of the tire as a lever (which it actually is, just a round one), as you get further away from the twisting force, the more torque it takes to move the end of the lever. Normally, when we think of the application of TQ, we are thinking of it the other way around, that being we apply a longer lever and it takes less force to create the TQ at the fulcrum (pivot point) of the lever. In our fictional example we are running with here, we have to look at it the other way around. That being, we are applying TQ at the fulcrum to move the end of the lever. If the end of the lever (the radius of the tire) is 12", we would be applying 2793 pounds of force at the end of that lever. Most tires are not, however, 24" tall.

The last main part of the equation is frictional losses. As I alluded to, every bearing, every bushing, every seal, ever gear ... all of it, sustains frictional losses. As a rule of thumb, the general thought is that 18-20% of the force coming out of the engine is gone by the time it reaches the contact patch of the tire at the ground. Our example of 2618 lbs would then be reduced to (using 20% for ease), would be ~2094.4 lbs of force.

Think now, of the difference of the TQ output would be if this hypothetical vehicle was sporting a rear end gear ratio of 4.0:1 (again, this is hypothetical)? Our transmission output of 1128RPM and 798 ft-lbs, now becomes 282RPM and 3192 ft-lbs. That is an increase of nearly 400 ft-lbs of torque. Wow, why don't we run a 5.0:1 ratio then and get 226RPM and 3990 ft-lbs, then? The problem, as you are probably guessing, is that we are running out of RPM. This affects the top speed of the vehicle. If we kept the vehicle in 1st gear alone, our top speed would be (using the tires above and a theoretical engine redline of 6800) 53.82mph @ 3.50:1, 47.16mph @ 4.00:1, and 37.74mph @ 5.00:1. Even in 4th gear in our T-56, with a 1:1 ratio, the top speed of our fictitious vehicle would only be 100.38mph if the rear end gearing were at 5.00:1. In racing terms, this is slow. There are two ways we can affect this. One way being shifting into a higher gear. We are lucky with our transmission which has two more forward gears, both of which are overdrive. The 6th, or final gear in our transmission is 0.63:1. This extends our theoretical top speed to ~159mph, which is much better. The second way we can extend our top speed is by making the tires taller (but remember, this affects our effective torque).

What all this comes down to, is finding the combination which works best for the needs of the car. How does this answer the question. I'm hoping this gives a clue as to how torque, running through the gears, affects what the output to the ground is. The only effect weight has in any of this is it takes more torque to get more weight moving to the same speed in the same amount of time.

The short answer is yes, you can do it that way as a quick reference. That being said, figuring out which car is "better" depends on what you want to do with it. If it's going to be a towing vehicle or long-distance family transporter, Torque/ton is what you're concerned with. If you want a traffic light racer, you'll have to look at horsepower/ton.

The reasoning: A Mazda Drifter 2500TDi Pickup may have 250Nm+ of torque and only 80kW of horsepower, while a Vauxhall Astra Turbo has 250Nm and 147kW.Their weights are roughly equal, but the Astra has about 70kW more horsepower. This means that while the pickup is able to move just as heavy a load as the Astra, it can't be considered a "fast" car because it will take ages to get up to speed (0 to 60 takes 16 seconds). Conversely, the Astra accelerates more than twice as fast (0 to 60 in 7.5 seconds). And they have similar flat torque curve profiles.

Torque is for heavy lifting, horsepower is for going fast. Ideally you want both, but you can settle for one depending on your need.

Mathematically torque of a car or any moving or rolling body which has angular velocity can be described by a equation . Let,

3. Moment of Inertia = I ( A Constant Value In General For A Specific Substance Which Is The Resisting Force).

Then , by the basic laws of physics and mechanics, the relation between torque T and the angular acceleration a is a proportional relationship mathematically and it can be written as following : 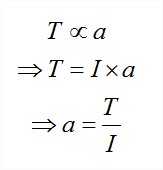 Which means, more torque produces more acceleration. But moment of inertia is a vital fact here which depends on some factors.

Now, we know the angular velocity, acceleration and torque of any certain object , let it be a car. The question is about the moment of inertia. The moment of inertia of any moving body like car or motorcycle is directly proportional to its mass . It increases as the mass is moved further from the axis of rotation. The fact depends on mass distribution of the object.The same body can have different moments of inertia If we consider different axis of rotation. This Is The Mathematical Explanation of your question. For calculating it directly and easily you can read this article which includes my research work on motorbike safety for the motorcycle blog named bikebd. All the terms about Horsepower, torque, momentum, force, resisting forces are briefly described here with calculation. I think, you'll get a more clear conception about your question here.

18
Engine power specification at different rpm?
4
What does "the bike dyno'd at 125BHP at the rear wheel" mean?
4
How are the engines of street cars different from trucks and performance cars?