What does it take to program a used ECU?

The vehicle has an immobilizer.

It will not start with the former ECU.

It floods the engine with fuel.

After extensive diagnostics on the vehicle and the ECU it was determined that I have a faulty ECU.

How do I mate the new to me ECU to the keys and the immobilizer in the vehicle?

Is this something that an enthusiast can do?

What tools do I need?

I know I need to get a code word based on the immobilizer, the actual programming itself, it is something a DIY can do?

The mating of the new ECU to the old ECU and immobilizer can be done without contacting the dealer, it even seems it can be done manually without any computer equipment, will confirm that in the next 48 hours

Remotely related issue: How to program a transponder key of a 2000 Toyota Sienna

ECU recognizes keys but does not start the vehicle, if all fails, will purchase a new immobilizer and mate it to the ECU so it can start

I don't know what magic the locksmith wants to pull tomorrow but should it fail, I got two choices: get another immobilizer (brand new so it can be programmed to communicate with the new to me ECU or get another used ECU which has the exact same part number as the one which is bad, I lean towards the former not the later!)

It appears that Mazda made internal changes to the MPV PCM and immobilizer in later models which necessitated a wiring change after PCM/immobilizer replacement. This means that just before I go through the expense of replacing the immobilizer, I am going to switch the ground which happened to be immobilizer harness terminal B in my built in 1999 as 2000 model to immobilizer harness terminal C which appears to have been the standard from 2000 going forward, see diagram attached, as you can see, there is no B in the circuit diagram. In my vehicle, the ground is connected to B instead of C. Having upgraded the ECU to the latest version number in which this change was effected, I also need to change the ground wiring at the immobilizer wiring harness to ensure that the immobilizer is connected to the vehicle's grounds!

The immobilizer recognizes the keys but cannot start the vehicle, the locksmith cannot explain the situation, but this looks to me like a case of an incomplete ground between the immo, the PCM and the vehicle. 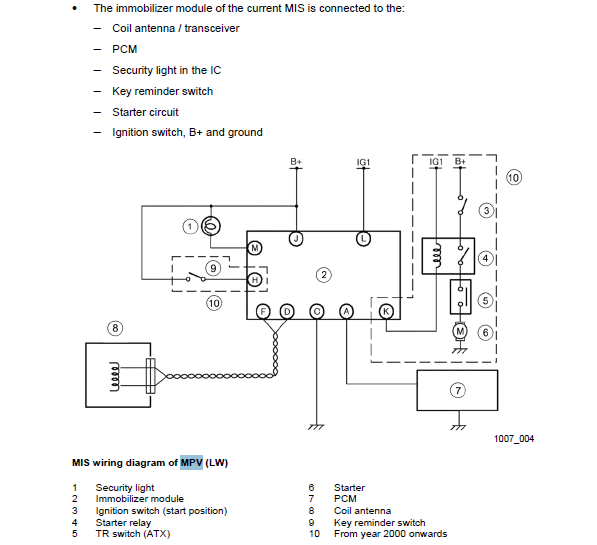 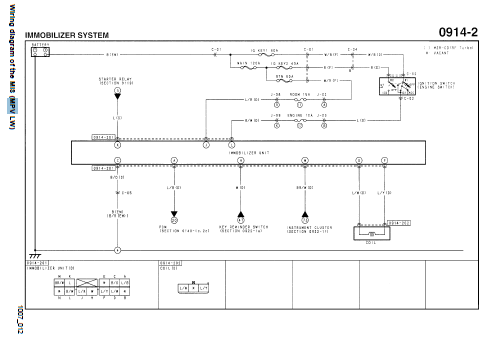 None of the provided answers are specific about programming a replacement PCM to a 2000 Mazda MPV so I wanted to chime in for any future visitors needing help.

There are two things that need to be matched up when changing this PCM.

1. The engine calibrations (software that runs the engine) You can usually buy the same part number computer with same software code and be good here but if you can only find the same part # with a different software code then you can use a j2534 tool along with a subscription to mazda and then flash the correct calibrations. https://www.mazdaserviceinfo.com/pcm-reflashing

2. The immobilizer system (if equipped, not all mpv's have one) The MPV uses a separate immobilizer box that then verifies a unique ID code with the PCM that it stored inside when they where first matched together before it allows firing. This code is unique to each box so even when the part# & software is the same this unique immobilizer code will need to be corrected inside the pcm. It verifies like this. KEY > IMMOBILIZER > ECU . When all are good the immobilizer deactivates.

These old systems will not let you learn a used immobilizer box and ecu together or program when all keys are lost diagnostically. The easiest work around for this is to either buy a secondhand key,immobilizer & ecu as a kitted unit. Another common work around is to clone the synchronization data directly out of your original ecu's eeprom memory (labeled 77005 ) into your new ecu's eeprom memory.

If you unfortunately do not have the original ecu any longer then the immobilizer box needs to be removed and the eeprom read from the hc05 mcu so that the sync codes can be found and matched to the replacement ecu. Its best to remove the mcu for reading and its in a very tight spot so I'd say it requires very good soldering experience.

One last thing that could be tried (but is untested by me) disconnect and remove the immobilizer box. Then replace the pcm with one out of a mpv that has no immobilizer system installed (most do not so this should be easily found in junk yard). Have pcm flashed to match engine if needed.

Dealers will want to replace the ecu, key & immobilizer with virgin units. (or they secretly just call people like me in to do the job instead for them with end user never knowing) but you can get it done with used parts regardless of what they may claim.

On a side note for others. IF your MPV does NOT have an immobilizer, then you MUST find a replacement pcm from another MPV that was with out an immobilizer or you will run into some immobilizer problems of your own.

I went through the "replace a faulty engine computer" drill a year or so ago and it was quite an ugly experience.

1). The manufacturer did NOT sell replacement units. This car was 15 years old. If your manufacturer supports it, having this resolved at your local dealership is your best chance for success.

2). In my case the engine computer failed because of a IGBT chip failure within the box. The control CPU was fine. Memory and communications were fine. The unit just wouldn't generate a spark signal.

3). We ended up purchasing a replacement unit through Autozone. Although they initially made a few mistakes they worked hard to correct them. As a result of that repair I'm a strong Autozone fan for life.

4). We still had to get the unit reprogrammed by the dealer, because of the keys and integral anti-theft system.

5). It might be possible to purchase a used engine computer (junkyard?) but you will definitely have to get it reprogrammed. In some cases there are hardware differences e.g. Six cylinders or eight? My unit only had chips to control six cylinders.

6) Steer clear of locksmiths to reprogram the anti-theft stuff. Those guys were sleezy crooks. I did get all my money back after filing a claim thru my credit card company.

In short start at the dealer. If they say no find a high quality auto parts place. Good luck with it.

Experience with other vehicles means you will need the computer / linkcable / software (not an aftermarket one but usually a dealer level) that matches your vehicle and that will be able to code your ecu to your car. Not a function usually possible with aftermarket readers that are used to extinguish the engine service light for example.

Not the answer you're looking for? Browse other questions tagged obd-ii mazda ecu key immobilizer or ask your own question.

5
OBD II Scanner refuses to communicate with the vehicle!
2
How to program a transponder key of a 2000 Toyota Sienna
1
Can the original ECU be replaced with other ECU codes on the same vehicle?